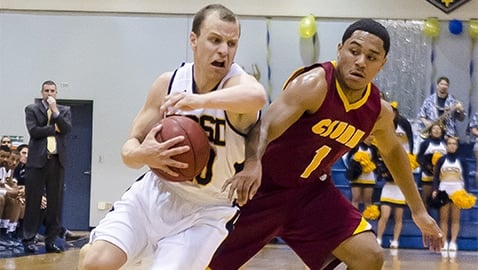 The UCSD men’s basketball team was unable to extend its three-game winning streak this weekend, falling to Cal State Monterey Bay 70–57 before bouncing back the following night to defeat Cal State East Bay 83–67. UCSD remains at .500 with a 9–9 conference record. The Tritons have only four games remaining in the regular season and are ranked seventh in the California Collegiate Athletic Association standings.

The Tritons struggled to shoot the ball against Monterey Bay, converting only 33 percent from the field and a dismal 23 percent from three-point territory. Relying heavily on perimeter shooting, UCSD scored only 57 points, nearly 15 points below its season average. The Tritons would also struggle from the free-throw line, making only 61 percent of their free throws, missing nine potential points that would have kept the game close enough to mount a comeback. Furthermore, only two players scored in double digits: Senior guard James McCann finished the night with a game-high 21 points and nine rebounds, while sophomore guard Hunter Walker added 14 points and eight boards.

Still missing senior forward Mackenzie McCullough and sophomore center Zach McMillan due to injury, the Tritons’ lack of size and transition defense allowed Monterey Bay to take advantage near the rim, outscoring UCSD 34–22 in the paint.The game had eight lead changes and was tied at 15–15 by the seven-minute mark in the first half. However, UCSD would never take the lead after that point and never led by more than two points in the entire game.

“We just didn’t play good enough to win,” Klie said. “I don’t think it was because we weren’t making shots and defensively we weren’t great. We didn’t really have that edge to our game that we have had more recently and it showed in the box score.”

However, the Tritons would shoot better the following night, sinking 8-for-20 attempts from beyond the arc and shooting 60 percent in the second half to extend their lead to 19 points against East Bay. UCSD also scored 20 points off of 15 East Bay turnovers.

“I think mentally we were sharper, especially on the defensive end,” Klie said. “It helps when you hit a couple shots especially in the second half, but it came down to just being really tough and getting some defensive stops, and I think we did that.”

The Tritons also had a more, well-rounded performance compared to the night before, as four players scored in double digits. Walker scored a game-high 23 points and grabbed five rebounds. Bouncing back from their disappointing performances, Klie and Dyer stepped up to score 14 points and 17 points, respectively. Klie also had eight rebounds while Dyer had four off the glass.

Next Saturday will mark the final home game for Triton seniors: McCann, senior guard Matt Bailey and McCullough, who will be honored before the game. After their final homestand next weekend, UCSD will wrap up its season with two games on the road.

“We have to have a really good week of practice in order to be playing well the coming weekend,” Klie said when asked how the team is preparing for its remaining games. “The focus has to be there the whole week, and then it’s just coming out Friday night and executing and playing harder than they will. We do those things, and the results will take care of itself.”

With only two weeks left before the CCAA tournament and still one spot out of postseason contention, UCSD is under immense pressure to win its remaining four games. UCSD will face San Francisco State (10–8) — which currently has the final tournament spot — at RIMAC next Friday in what will likely be the most important game of the season. If the Tritons win, they will be tied for the sixth and final CCAA tournament bid and will control their own postseason fate.