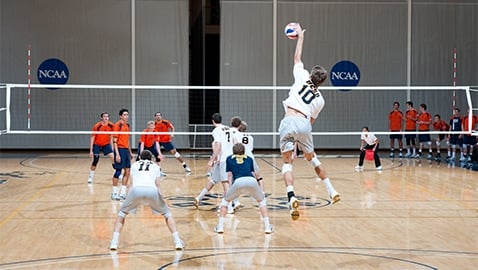 The UCSD men’s volleyball team was swept by University of Southern California and Pepperdine University at RIMAC Arena last week.

Now 13 games into the season, the Tritons have found themselves in a tough spot. Having lost all 12 of its conference matches so far, UCSD is now dead last in the Mountain Pacific Sports Federation conference rankings (0–13 overall and 0–12 in conference).

“We play the game to win — that hasn’t changed for us,” UCSD head coach Kevin Ring said to the UCSD Athletic Department. “We are still talking about trying to win these matches, but we’re looking at what we do during the week, during the practice and we try to make some improvements along the way”.

As of late, Ring has made some changes in his lineup, one of which was switching senior setter Mike Brunsting to play as an opposite hitter. The change paid off, as the senior collected no fewer than 29 kills during the last two matches.

“He’s been very open for that [position change], and he’s one of our more athletic players on the team,” Ring said. “It’s nice to have a 6-foot-5-inch leftie setter that can go and play opposite. We’ve had some injuries this year, we had to make some changes, so we are a little thin, but he [Brunsting] has taken the role, and I think it’s an advantage.”

Friday night UCSD hosted conference opponent USC in RIMAC Arena. Losing to the Trojans by scores of 25–13, 25–21 and 25–15. The Tritons took the first two points of the match, but the Trojans won the next three, and despite three subsequent Brunsting kills, the guests steamrolled their way to a 11–5 lead in the first set and dominated the rest of the game.

The second set saw eleven tie scores and four lead changes, as the Tritons led at the 17–14 mark. But UCSD, who has struggled in tight games, lost the advantage, as USC tied the set-up at 19–19 and ultimately won 25–21.

The first set had 15 tie scores and three lead changes. Tied at 20–20, the Waves finally took the set home after several set points.

Pepperdine controlled the second game throughout. Tough serves and efficient attacks forced UCSD to make errors on their end of the court. However, the Tritons came back strong in the third set with help from Brunsting, who notched six of his 17 total kills in the third frame. Staving off a Pepperdine match point, the Tritons tied the score at 24–24.

But two subsequent Triton errors made the job easy for Pepperdine, whose 25–27 win was its sixth straight against UCSD.

Together with Brunsting, redshirt sophomore outside hitter Kirill Rudenko led the UCSD offense with 16 kills during the two matches. Sophomore libero Elliott Shaw collected eight digs Friday night and reached a career- and match-high with 10 digs for UCSD Saturday.

UCSD will return to the road this the week to play No. 13 Cal State Northridge on Wednesday, Feb. 19 and No. 6 Cal State Long Beach on Friday, Feb. 21.