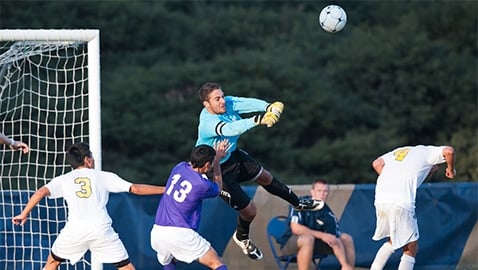 Senior goalkeeper Josh Cohen, the man who singlehandedly pushed UCSD into the third round of the NCAA Tournament with a diving penalty kick stop, got a glimpse of the next stage of his athletic career at the end of January while on trial with Major League Soccer team the Philadelphia Union.

In the last week of January, Cohen was one of nine players invited to practice with the Philadelphia based professional soccer team, whose ranks include the likes of former U.S. National Team midfielder Maurice Edu. But Cohen — a goalkeeper who earned NSCAA All-American honors for his efforts in the 2014 — was not initially on Philadelphia’s radar. Luckily for Cohen, the Union was short a goalkeeper at the time, and UCSD head coach Jon Pascale was familiar with the coaching staff. After Pascale put in a good word for Cohen, UCSD’s senior keeper was invited the day before the preseason training camp was set to begin. He was put on a plane that night.

The camp lasted for one week, beginning Saturday, Jan. 25 and running through Feb. 1. On the first day of the trial, Cohen went through a fitness test and spent the remaining time going through two training sessions a day.

“The level of play was so high,” Cohen said. “Everything was a lot faster; the shots came in a lot faster. It was a lot of fun, but it definitely took a toll on the body and was very tiring.”

Although Cohen said the level of play was hard to adjust to, he thought he showed well and learned a lot from the experience.

“It was such a good experience for me,” Cohen said. “Now I know that I can play with those at that level and learned what it is that I need to work on and what things I can do to improve going forward.”

As a three-year starter for the Tritons, Cohen has used up his four years of NCAA eligibility, but the bioengineering major will continue on at UCSD for a fifth year to finish his degree and work on his senior project. Cohen says he hopes to continue training with the UCSD team while finishing up his studies, although he would be interested in finding a Southern California professional or semi-professional team to practice with. Cohen said ideally he’d like to train with the second teams of MLS Los Angeles clubs the L.A. Galaxy or Chivas USA. Cohen said he would also be open to playing with the San Diego Flash.

“Staying a fifth year complicates my situation a little bit as far as being able to play professionally,” Cohen said. “But being at a top school, I definitely want to finish my degree. My goal is to work really hard in the next two quarters and put myself in a good situation academically so I can focus on finishing my senior project and look at various soccer options.”

Cohen, who is in a pretty good situation to continue on in professional soccer, would be in good company. Former UCSD centerback Jared Kakura, class of 2012, went on to play with the San Diego Flash for a time and was on trial with MLS team the San Jose Earthquakes, while David Bakal, class of 2011 went on to play for the Los Angeles Blues, a USL Pro Division team.