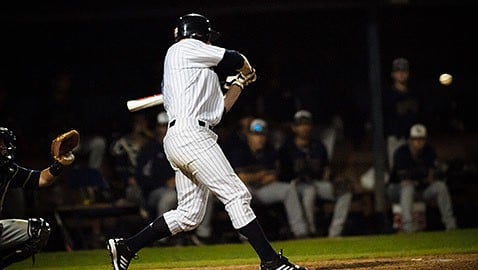 In the first game, three Golden Eagles’ pitchers shut out the Tritons entirely. Trent Zaks from the Golden Eagle bench scored in the second inning off a Triton error. Zaks’ run would be the only one scored for three more innings.

Cal State Los Angeles recorded two runs off eight hits with two errors while the Tritons were shutout and put up only two hits and two errors.

UCSD looked much more explosive in its second game, although the Golden Eagles scored three times off two hits and an error in the first inning.

“We have to do a better job complementing our pitching with a little better defense and a little more pressure offensively,” UCSD head coach Eric Newman said of the first two games.

For the final — and most exciting — game of the series, the Tritons traveled north to Los Angeles to battle the Golden Eagles at Reeder Field. From the onset, it appeared as if it would be another low scoring pitchers’ duel, as both teams remained scoreless and hitless through three and a half frames.

The Golden Eagles opened up the scoring with seven runs on six hits.

Facing a massive deficit midway through the game, the Tritons attempted to rally back in the fifth inning but only managed to score one run. Looking to end the game early, Los Angeles scored twice more in the bottom of the fifth to go up 9–1.

But UCSD refused to give up as they slowly mounted a comeback, picking up a run in the sixth off a Golden Eagle error. Triton pitcher Cruz held the Golden Eagles scoreless through the final four innings, giving UCSD time to cut the deficit. In the sixth, the Tritons picked up an impressive six runs on two hits amid Golden Eagles pitching errors.

The now 3–2 Tritons head back home to face conference rival Chico State in a four-game series beginning on Friday, Feb. 14 at 6 p.m.