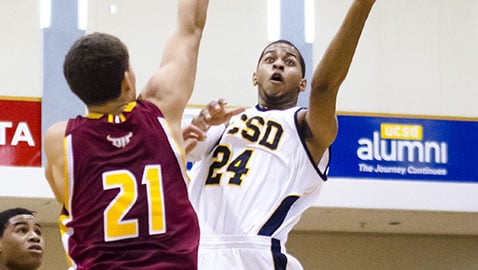 After splitting its two-game homestand last week, the UCSD men’s basketball team pulled off two upsets on its weekend road trip, defeating Chico State at the buzzer and defeating Cal State Stanislaus 67–65 in another close game. The Tritons improve to 8–8 in California Collegiate Athletic Association play, still one position behind San Francisco State (8–7) for the final postseason spot.

On Friday night, the Tritons came out slow, digging themselves into a 12-point hole and trailing Chico State for the entire first half. But, UCSD battled back to keep the game close and grabbed a 57–54 lead after senior James McCann’s three-pointer with 7:11 remaining. The game had several lead changes after that but sophomore guard Hunter Walker’s pair of clutch free throws tied the score at 64–64 with 1.6 seconds left in the game.

As the Wildcats inbounded the ball on their own half, sophomore forward Drew Dyer’s defensive pressure forced Chico to overthrow the ball, giving the Tritons possession. With McCann on the inbound pass, Dyer cut wide and drained a 16-foot fadeaway buzzer beater to steal the win.

“I thought our guys played with a lot of heart and toughness,” head coach Eric Olen said to the UCSD Athletics Department last Friday. “We continued to compete and fight back when we got behind. We really put ourselves in position to have a chance, and we were fortunate to make some plays at the end. I’m really proud of our effort.”
The following night, the Tritons would extend its winning streak to three games by upsetting Cal State Stanislaus, dealing the Warriors only their second loss at home. The Tritons came out strong, taking the 39–32 halftime lead. The game would become more competitive in the second half as the Warriors attempted to make a comeback. With less than 2:43 remaining, the UCSD lead was cut to only two points. The ensuing possessions would be an exchange of free throws, with UCSD shooting 73 percent in the second half and the Warriors only shooting 62 percent from the charity stripe.

“We played with great energy, effort and toughness,” Olen said. “We beat a very good team on the road tonight. We played solid basketball all weekend, and we held on to get a tough, hard-fought win tonight.”

The Tritons have won five of their last six games. They continue to play on the road next weekend when they visit Cal State Monterey Bay (6–10) and Cal State East Bay (4–12). The Tritons defeated Monterey Bay and East Bay earlier in the season at home, winning comfortably on both occasions. Now a little bit over halfway through the season and still one position behind San Francisco State (9–7), the remaining games will likely determine UCSD’s postseason fate.