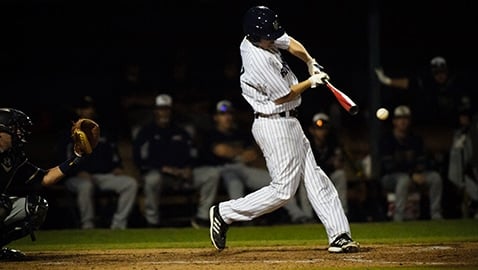 The UCSD baseball team kicked off its slate of exhibition games with a 4–0 victory over San Diego Christian College last Friday night at Triton Ballpark. Following the shutout over SDCC, the Tritons trounced Cal State San Marcos Tuesday, Jan. 21, 19–0 with a standout 4-for-4 performance with three runs, one run batted in and one walk by sophomore two-way player Troy Cruz.

Junior right-hander Dan Kolodin started on the mound for the Tritons and threw three no-hit innings including five strikeouts. Kolodin was followed by a two-inning performance from sophomore right-hander Adrian Orozco, junior southpaw Trevor Scott and senior right-hander Blake Fassler — who all recorded two strikeouts apiece. The Tritons’ pitching performance was highlighted by Fassler sending back all six batters he faced and making a quick grab off of San Diego Christian’s Luke Brando for the final out.

“Our pitching and defense performed really well,” Newman said. “Our pitchers attacked hitters with good pace. They controlled the game and kept our tempo.

An RBI groundout by freshman center-fielder Jack Larsen gave the Tritons its first run in the third inning, with freshman right-fielder Christian Leung managing the same in the fourth. Two errors by the Hawks gave UCSD the other two tallies to close out the game.

Against No. 16 ranked Cal State San Marcos, UCSD managed three runs in the first two innings but pulled far ahead of the Cougars in the third by scoring nine runs on six hits. The Tritons racked up 13 hits against the Cougars with seniors Justin Rahn and Spencer Frazier, junior Erik Lewis and Leung each contributing two hits to Cruz’s four.

Against San Diego Christian, UCSD stranded 10 batters despite a great defensive performance, and Newman noted the Tritons’ improvement against Cal State San Marcos.
“I definitely saw a team from our standpoint, where we took to heart the things that we saw in the first game, and we worked on it a lot,” Newman said after the game.

Pitching continues to be a focal point for the Tritons’ success, as sophomore Justin Donatella started on the mound against the Cougars and struck out six hitters across four full innings.