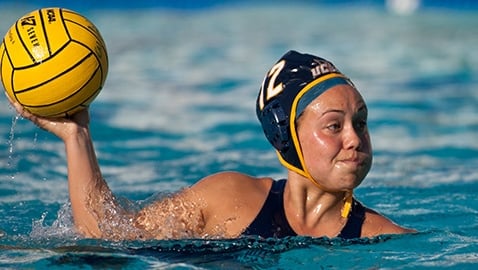 The No. 8 Tritons dominated at the UC Santa Barbara Winter Invitational with four straight wins

The No. 8 UCSD women’s water polo team finished the UC Santa Barbara Winter Invitational with wins over all four opponents: Concordia, No. 5 Arizona State University, No. 17 UC Santa Barbara and Cal State Bakersfield. The tournament sweep advances UCSD to 4–0 on the season and improves the Tritons’ standing in the Collegiate Water Polo Association from No. 14 to No. 8.

UCSD began the 2014 season with a blowout win against Concordia on the first day of the UCSB Winter Invitational. The Tritons rallied around the offensive performances of sophomore attacker Julia Kirkland and sophomore two-meter Alexis Wieseler, who found the back of the cage four times each, and senior utility Sarah Lizotte, who contributed three goals. Combined with the offense, sophomore goalie Courtney Miller racked up two saves in the opener and the Tritons were up at the last buzzer by 21–2.

Following the standout Triton victory in the first game of the day, UCSD met No. 5 Arizona State University and beat the Sun Devils in an upset win. Wieseler tallied three more goals on the day, and Lizotte led the Tritons with a five-goal contribution to the win. Miller shut down the Sun Devils’ offense by managing nine saves, bringing her total for the day to 11. UCSD kept pace with the Sun Devils, never losing the lead despite a strong performance from the ASU offense. The game remained close until the end with the Tritons stretching their lead to 9–7 in the third quarter only to be outscored by ASU in the fourth, bringing the final score to 12–11.

The Tritons defeated host team UCSB 11–7 in their first game of the day on Sunday. Lizotte led the offensive effort, scoring three goals on the day, and fellow senior utility Leah Gonzales and sophomore attacker Laurel Kistler both finding the cage twice.

UCSD started the game hot against the Gauchos with three goals scored in the first quarter and commanded a lead throughout. Miller had eight saves in the game, allowing the Tritons to outscore the Gauchos in three of four periods to pull off the win. The Tritons were only outscored in the third quarter, when UCSB scored two to the Tritons’ one and crept within two goals of the UCSD lead.

“We’re talented, deep, a little older and are playing confident,” UCSD head coach Brad Kreutzkamp told the UCSD Athletics Department. “Because we have everyone back from last year, we’ve had time to work on more advanced stuff than we have in previous seasons, and I think we’re probably just ahead of a lot of teams right now.”

The Tritons repeated their quick start in game one in their second game of the day against Cal State Bakersfield. UCSD scored four goals in the first quarter and improved its lead to 11–5 by the end of the second. Wieseler scored a team-high four goals against the Roadrunners while senior center Melissa Bartow, Kirkland and Gonzales contributed two goals each to the win.

Miller tacked on six saves against the Roadrunners to bring her weekend total to 14 blocks.

“We’re playing really well offensively, pretty polished, but we’ve still got a lot to work on, particularly on the defensive end,” Kreutzkamp said to UCSD Athletics Department. “Our players are feeling good, but not too good. We want to be playing our best at the end of the year, not the beginning. They know this was a positive start, but there’s a long way to go, and I think they have the right mindset.”

UCSD will continue its season Feb. 8 to Feb. 9 by hosting the Triton Invitational at Canyonview Aquatics Center. The schedule is expected to be released next week.