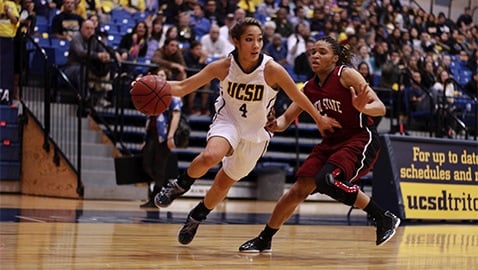 In preparation for winter season coverage, I found myself scrolling through UCSD rosters. In the case of the women’s water polo team, a squad which did not lose a single senior to graduation, I recognized the bulk of the names on the list. Others, like the men’s volleyball team, I was less familiar with.

I saw Johl Awerkamp, a name I’ve committed to memory simply because I was tired of being corrected by our copy editors for misspelling. But where was Sebastian Brady, a junior captain in 2013? Comparing last season’s roster to this season’s, I noticed a remarkable 11 players, none of whom had aged out, were absent from the 2014 group.

“Unexpected turnover rate,” which measures the number of players who choose not to continue despite eligibility, is found by dividing the players who opt out of competition by the number of possible returners. In my quick survey, I did not include players who had been drafted professionally or those who have eligibility but have spent four years at a community college or university.

With this metric in mind, I looked at some of UCSD’s other teams.

What I found was not surprising.

Most of our athletic teams have a very high retention rate, no shock for a school that consistently tops the list of the National Collegiate Scouting Association Power Rankings, a list that ranks schools according to athlete graduation rates and academic and athletic prowess.

All this was interesting enough. But I started to wonder if there was any correlation between turnover rates and winning percentage. The National College Players Association published a report in 2009 that ranked the NCAA Division-I basketball teams that qualified for the Big Tournament.

Michigan State — a school with a UTR of 0 — placed second that year, while 2009 national champions UNC had a relatively low UTR of 13 percent. Florida State, the school with the highest UTR, did not advance past the first round.

But is the trend consistent for UCSD? The answer is unclear — or rather, the R-squared is low (0.49).

It’s unclear what causes high unexpected turnover rates — an aberrant excess of injuries, inconsistency in the coaching staff, a lack of team chemistry — but if you’re a coach looking to pick up a couple extra W’s over the course of a season, it’s sound advice to keep investing in the players you have.