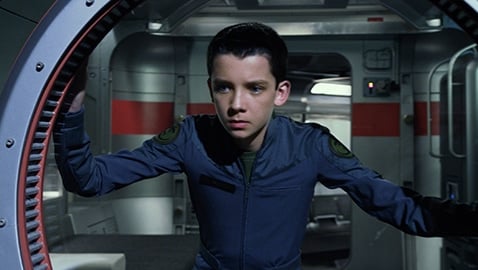 Space battle in “Ender’s Game” not out of this world

A contingent of Earth’s brightest children battle an intelligent alien species from the far reaches of the universe that threaten to destroy them all. This is “Ender’s Game,” the fantasy brought to the silver screen by director Gavin Hood (“X-Men Origins: Wolverine”), based on Orson Scott Card’s popular science fiction novel of the same name. As with many epic novels, translating text to screen proved to be a challenge, and Hood’s difficulties show through. While the film does a decent job with special effects and background music, its underdeveloped characters and plot — cut short at 114 minutes — fail to give it the pure “thrill” of the alien-versus-human, outer space mega-battle that is imagined in the book.

The movie follows the premise of the novel’s storyline thoroughly. A young boy named Ender Wiggen (Asa Butterfield) is attending a special school for the development of children recognized to have vast potential. Although he is teased for being a “third” — a third child under the government’s two-child policy — he hopes to be recruited as a part of the International Fleet to fight against an alien race known as the “Buggers.” Ender displays his superior intellect and potential when he successfully beats up a bully, Stilson, and in doing so, ends bullying for all “thirds” in the future. IF Colonel Hyrun Graff (Harrison Ford) notices this particular tactic as precisely what is required by a future commander of Earth’s offensive, and he offers Ender a spot in the prestigious Battle School.

Though the film captures a majority of the book in 114 minutes, the storyline seems too rushed. Consequently, the relationships between the characters are underdeveloped and unconvincing. This includes the relationship between Ender and his sister, Valentine (Abigail Breslin). From the book, their brother-sister bond is supposed to be what Ender values above all; however, the movie does not reflect their closeness. Ender threatens Col. Graff by saying he will drop out of Battle School if he is not allowed to contact his sister, but the movie fails to acknowledge the significance of their relationship prior to this. One intimate moment shows the two of them talking on his bed after he fights Stilson, but their brother appears and quickly interrupts the scene. Because the intimacy between Ender and Valentine does not feel genuine, his longing for his sister in Battle School — which becomes so overwhelming that he must return to Earth — seems overdramatic and forced.

The film version of Ender also seems to have plenty of friends. In the book, Ender feels alone: when Col. Graff calls attention to him as one of the brightest recruits by Col. Graff, the other recruits turn against him. In the movie, however, he connects with other characters with ease. He becomes fast friends with Bean (Aramis Knight) as soon as he boards the spaceship, as well as Petra (Hailee Steinfeld), who he meets at Battle School. His ability to make friends undermines his alleged loneliness in Valentine’s absence.

The film also underplays many of the important dramatic elements of the book. The last 20 minutes of the movie contain far too much plot in far too little time, and this detracts from the importance of the scene. The final battle scene in command school, which could have been spectacular, feels brushed over — even its outcome is overlooked. After the victory, Ender and Graff have an abrupt, and seemingly emotionless, final exchange of words, a dismissive end to what was supposed to have been the most important intergalactic battle ever waged by mankind.

Given the rich material that the director had to work with, the movie could have been a sci-fi masterpiece, but with much of the plot skipped or poorly portrayed, fans of the book are likely to be disappointed.