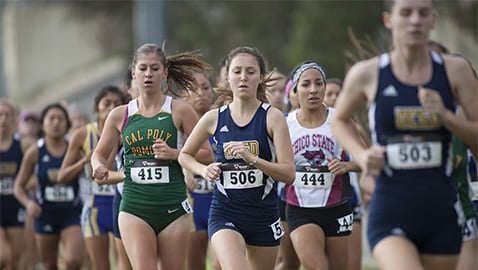 ith the postseason around the corner, the UCSD cross-country team is looking to step up its game in order to edge out the competition.

With a season of strong finishes for both the men and women, the Tritons head to Chico for the California Collegiate Athletics Association championships this weekend to kick off the postseason.

Most recently, both squads finished second in the Triton Classic to reigning CCAA conference champion, Chico State, who came out victorious.

“The men lost by a pretty big margin [in the Triton Classic],” UCSD head coach Nate Garcia said. “But we will try to close the gap on them this time. On the women’s side, it was closer but with a couple of adjustments we’ve been working on, we hope to come in and beat them at their place.”

Sophomore Scott Acton crossed at seventh overall and was top finisher for the Triton men. Top spot for the women went to sophomore Marie Diaz who took third overall. Both Acton and Diaz were named CCAA Freshman of the Year at last year’s CCAA meet.

“We’re excited where both of them are in their second year,” Garcia said of Acton and Diaz. “We anticipate them to be real successful in the championship meet and for them to match with the other teams in the conference.”

To beat the Wildcats in this weekend’s CCAA meet, however, the Tritons will need strong performances from all of their runners.

“In order to beat Chico, we’ll have to be both physically and mentally prepared,” Acton said. “Chico has established themselves as one of the best Division II schools in the nation.”

Both Acton and senior standout Kellen Levy have been leading the charge for the Triton men, both having placed top 10 at the Triton Classic.

The women have posted some solid team performances the last couple of meets, most recently at the Triton Classic with Diaz, sophomore Chandler Colquitt, junior Michelle Le Roux and sophomore Paige Hughes all having finished in the top 10.

Competition will be tight for both squads this weekend. The men will be competing against two nationally ranked programs, No. 5 Chico and No. 17 Cal Poly Pomona. The women won’t have it any easier, competing against No. 7 Chico as well as No. 25 Cal State Stanislaus.

“Chico is a real strong program, but I’d be lying if I didn’t say we weren’t going to try to win the meet,” said Garcia. “We are optimistic that we have the squad to qualify out of regionals and can finish top five to advance on to nationals.”

Garcia has posted several regional appearances over the last few years and is looking forward to another one this season.

“We are confident that we have the people necessary to come out strong and place high this year.”

Confidence is key this weekend according to Acton. “Over the past few weeks, I’ve been working on racing more confidently and adjusting how I’ll approach the next few championship races,” he said.

“If each of our guys runs to their potential, then we should be able to compete against anyone in the conference.”