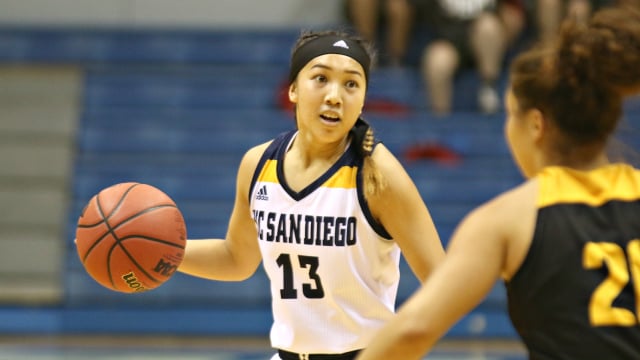 Last Thursday, the UC San Diego women’s basketball team traveled to Seaside, CA to face off against Cal State Monterey Bay. The Tritons handled the Otters, winning 65–56, advancing their record to 14–2 overall and 10–0 in conference.

Through the first half, neither team was able to establish a dominant lead. In the first period, UCSD got off to a slow start, allowing Cal State Monterey Bay to pull ahead 8–4 three minutes into the game. A rebound and score by redshirt sophomore forward Mikayla Williams galvanized the stumbling Triton team. With the help of two key steals, UCSD was able to end the period with a two-point lead (16–14). However, by the second period, the Otters had managed to even the score 28–28.

Coming out of halftime, the third period looked to be much like the first half. The Tritons earned the first points of the period but were unable to generate any offense after that, quickly dropping to 37–30 in less than three minutes. The Tritons, however, were able to eventually find their groove, keeping the Otters from running away with the game.

Trailing 44–47, the Tritons opened the final period with a nice offensive performance spearheaded by senior forward Dalayna Sampton. With the help of junior guard Kayla Sato and senior guard Taylor Tanita, the UCSD pulled out of the game with a win. The end score was 65–56.

The Tritons had a decent offensive showing. Williams lead the team in scoring, recording 13 points on the night. Sampton and junior forward Shandiin Armao also had a great night shooting — both contributing 10 points. On defense, Sato provided the team with two key steals and a block.