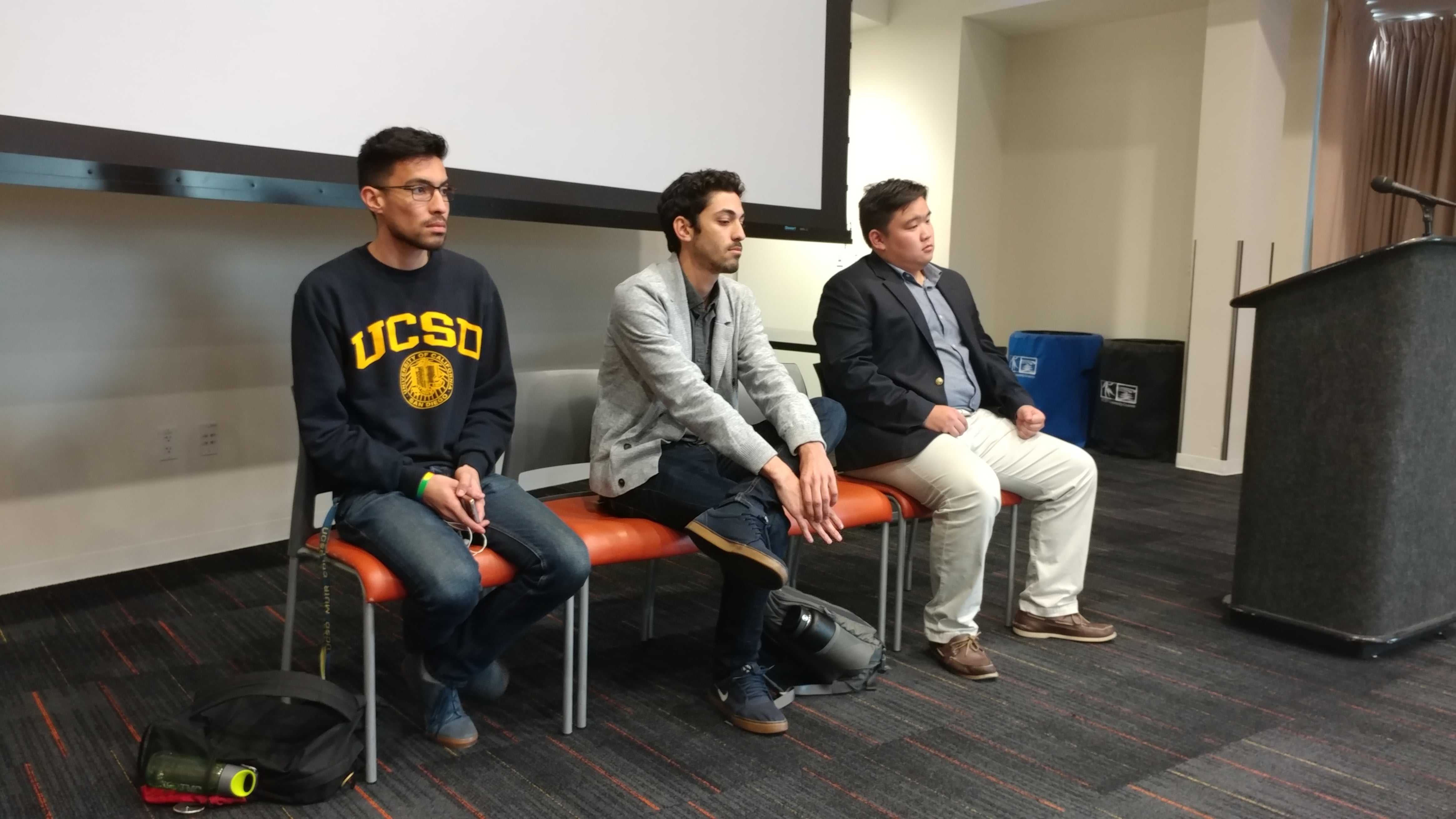 Three candidates running for the office of vice president of external affairs made their cases at a public forum on Wednesday night, explaining why they believe they should be appointed the position. The winning candidate will become one of four executive officers within A.S. Council along with President Daniel Juarez, Vice President of Campus Affairs Sabrina Ekdahl and Vice President of Finance and Resources Justin Pennish. The responsibilities of the office include, but are not limited to, representing UC San Diego at UC Student Association board meetings and organizing student lobbyists on the local, state and federal levels.

Dennis Yeh, the first candidate to speak at the forum and an international studies and political science major, underlined his experience communicating and negotiating with legislators. Having interned abroad in both Hong Kong and Thailand with a focus on banking, Yeh said he can bring a “global perspective” to the office. He also hopes to “leverage student potential” when it comes to lobbying and plans to introduce a system that gives each legislator a letter grade based on their performance to make it easier for students to keep representatives accountable. Without any previous experience in UC San Diego student government, Yeh said he views himself as an outsider who can bring new solutions to A.S. Council.

“I’m able to represent the student body in various ways,” Yeh said in closing, “whether it be through my major or through my race.”

Nicolas Monteiro, the second candidate to speak at the forum and an ethnic studies major, is the current organizing director in the office of external affairs and cited his experience as an important reason to appoint him as the next vice president. Monteiro presented a three-step plan of which the first was to fully staff the mostly vacant office. Second, Monteiro said he would be intentional about recruiting Muslims and undocumented students for the Student Lobby Conference, a lobbying workshop during weekend of March 25 to March 27 where students will lobby at the state capital in Sacramento. Third, Monteiro hopes to strengthen the Triton Lobby Core, a student advocacy group that currently consists of only four members.

“I want to bring the expertise and knowledge I’ve acquired working in the office,” Monteiro said.

Miguel Martinez, the third candidate to speak at the forum and a sociology and political science major, is a transfer student from south central Los Angeles who served as the commissioner of student services and treasurer at his community college LA Trade Technical College. Martinez highlighted his experience by listing accomplishments such as hosting grants with the city of Los Angeles to perform community events, participating in marketing campaigns and grant writing. He advocates for more state funding and hopes to build community relationships and programs. Martinez also said his love for interacting and connecting with people would allow him to excel in the position.

“I have a lot of experience,” Martinez said.

President Daniel Juarez said she is looking for a candidate who has “been around” and who “understands all the entities involved” and how they interact, including the UC Regents, UC Office of the President, UC Student Association and the state legislature.

“We don’t have time for a learning curve,” Juarez told the UCSD Guardian.

The Guardian gave each candidate the opportunity to state why they believe they are the best choice for the office of vice president of external affairs.

Dennis Yeh
I believe that I am the best candidate for this position because I am an outsider to [A.S. Council] with an insider perspective on state and local government. I bring actual experience fighting for students’ rights beyond campus grassroots efforts involving the same instigators and resulting in the status quo. I am the best suited to harness the political uncertainty across the United States and will create realistic positive change for all people on campus. I hope to accomplish this by publicizing the roles and stances of lawmakers in California and forming coalitions with organizations other than student groups to create outside credibility. Lastly, my main goal is unique to the other candidates. I want to harness the potential of the apathetic who have become inured to the plight of the activists leading the charge.

Nicolas Monteiro
I believe that I am the best candidate for VP of External Affairs because of my expertise in organizing and building coalition to address issues at the local and statewide level — regarding topics such as sanctuary policy, access and retention of marginalized communities, and affordability of the UC [system]. Understanding how the office is run and where it needs restructuring, coupled with my knowledge of UCSA, will allow for the smooth transition into the position for effective organizing and advocacy that UCSD students deserve.

Miguel Martinez
During my tenure working with the Associated Students of LA Trade Technical College, I was able to advocate for the students at the board of trustees by bringing discounted bus passes and veteran’s resources to the campus. I have actively participated in the state-level student association of community colleges by lobbying for student-friendly policies regarding registration, finances, and resources. Lastly, I have rigorously been involved with the surrounding community of south Los Angeles by conducting workshops, community events and helping our clubs conduct community workshops as well. I have the skills, information and resources to get this job done effectively and efficiently — this is what makes me the best candidate.

A.S. Council members will cast their votes for the next vice president of external affairs on Wednesday, Feb. 15.