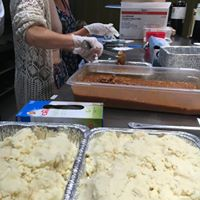 Having too much food sounds like a luxury, maybe even a dream. To the Food Recovery Network, however, the situation poses both an environmental problem and a hunger-abating solution.

Born out of a frustration with food waste and homelessness, the FRN strives to alleviate both issues at a local, grassroots level. First, members of the national service organization gather leftover food from their respective college’s dining halls before repackaging, transporting and donating it to homeless shelters to feed hungry occupants. UCSD has its own newly-founded chapter, which has grown from a small volunteer project among friends to a full-fledged organized effort to diminish food waste and feed homeless San Diego youth in just one year.

Like many of the chapter’s co-founders, Sara Rupp, one of the co-presidents of FRN@UCSD, was working at Housing, Dining and Hospitality at the time of the organization’s inception. As a UCSD Catering Services employee, she witnessed firsthand how much food was consistently being wasted and resented her involvement in the process.

“Every day, you just see dozens of pounds of really good food get thrown out,” Rupp told the UCSD Guardian. “It just killed me to see it all getting wasted, and I was really frustrated that I had to participate in it.”

But when she and others shared their common frustrations, they decided to take action and proposed to HDH a solution that would be beneficial to all parties involved.

Though HDH now fully supports FRN@UCSD and its mission, it was hesitant to approve the project at first, partly due to justified concerns about the organization’s lack of preparation.

“We weren’t organized at all, and we didn’t seem legitimate to them,” Rupp admitted. It ultimately took a whole year of negotiating to establish a partnership with HDH to recover its food.

FRN@UCSD’S current advisor, UCSD Executive Chef Vaughn Vargus, was actually one of its opponents in the beginning, mainly due to doubts about the members’ qualifications to safely handle and transport food.

“Because he invests so much creativity, passion and care into the food that he serves students, he doesn’t want any of his good food that he put so much work into going to an intermediary that is unqualified to safely transport it,” Rupp explained. “He doesn’t want anyone getting food poisoning from his food because he feels responsible, even though legally, he’s not.”

However, now that the organization is certified and has proven its ability to handle the sensitive tasks involved in food recovery, HDH has gotten behind FRN@UCSD, occasionally supplying its members with food recovery items — pans, foil, gloves and coolers — and even helping it expand to other parts of campus, like the Faculty Club.

“Because the chef knew our reputation with HDH, [the Faculty Club] trusted us, so it only took an hour-long meeting to get a partnership with them,” Rupp said.

The Food Recovery Network and HDH, however, don’t just have a one-way relationship. As HDH helps the organization become more efficient at recovering food, it’s helping HDH become more sustainable, waste less food and effectively lessen the amount of food the organization has to recover.

“We help [HDH] hold themselves accountable because we are showing them to their face how much they waste,” Rupp explained. “We keep logs of the amount wasted and they take pictures of every pan that we recover so that they know what they’re wasting consistently and what they should produce less of.”

Once the food recovery aspect of the process was taken care of, the other half of the equation — finding a homeless shelter to donate the food to — was still unsettled. Though one might expect there to be many homeless shelters eager to take on hundreds of pounds of food for their starving patrons, especially in a city with one of the nation’s largest homeless populations, it was actually quite difficult for FRN@UCSD to find a suitor.

“Over the summer, I looked through about 20 local homeless shelters and soup kitchens in the area, but only Urban Street Angels could take our food,” Rupp explained. “All the other ones could not take cooked foods, they didn’t have a food handler’s license, they were up to capacity, or they just didn’t have refrigerators.”

Fortunately, Urban Street Angels, which serves San Diego’s homeless youth (18 to 26 year olds), is able to take all of the food that FRN@UCSD recovers and uses it to feed over 80 people every week, an extremely rewarding result of the organization’s efforts.

“There’s the common saying, ‘I’m starving,’ but not many of us really know what starving is,” Chaz Woxland, FRN@UCSD’s other co-president, stated. “We’re giving food to people that actually are starving and that otherwise couldn’t get out of bed because they’re so tired and distraught from not having enough energy or calories.”

FRN@UCSD aims to give them the necessary calories by recovering nearly 250 pounds of food every week over the span of three days. Though this number is now typical for the organization, such tremendous progress in this short amount of time has been a pleasant surprise.

“This entire quarter has been completely different from what we’re used to. It’s been so far-fetched,” Woxland told the Guardian. “The recoveries we did last spring when we were first starting out added up to about six pounds, and now we’re getting 60, 70 or 80 pounds [for every] recovery.”

Fortunately, the student-run organization now has a sizable pool of volunteers to rely on, whereas in the summer, only eight of the members remained in San Diego, all of whom were in summer school. Now that FRN@UCSD has a staff of over 30 members — 12 board members and around 20 regular volunteers — it’s able to accomplish its weekly recoveries at a much more efficient pace, with each volunteer only having to commit to an hour or two per week. However, the organization is always looking to bring in new people to help expand its operations and become a part of their community.

To make volunteering as simple as possible, the organization posts all of its sign-up sheets on the FRN@UCSD Facebook page. All you have do is open up the latest sign-up sheet, choose the times that work for you and FRN@UCSD will handle the rest from there. The members hope that by making the process so convenient and prioritizing newcomers, they’ll maximize the UCSD community’s involvement.

But for those still hesitant to join, Rupp succinctly summarizes the simplicity of the group’s mission. “There’s a common solution to two local problems, food waste and homelessness, and we provide it. It’s kind of a band-aid — I wish we didn’t need to exist — but it’s at least addressing symptoms that have real, severe consequences.”­­ [icon name=”stop” class=”” unprefixed_class=””]