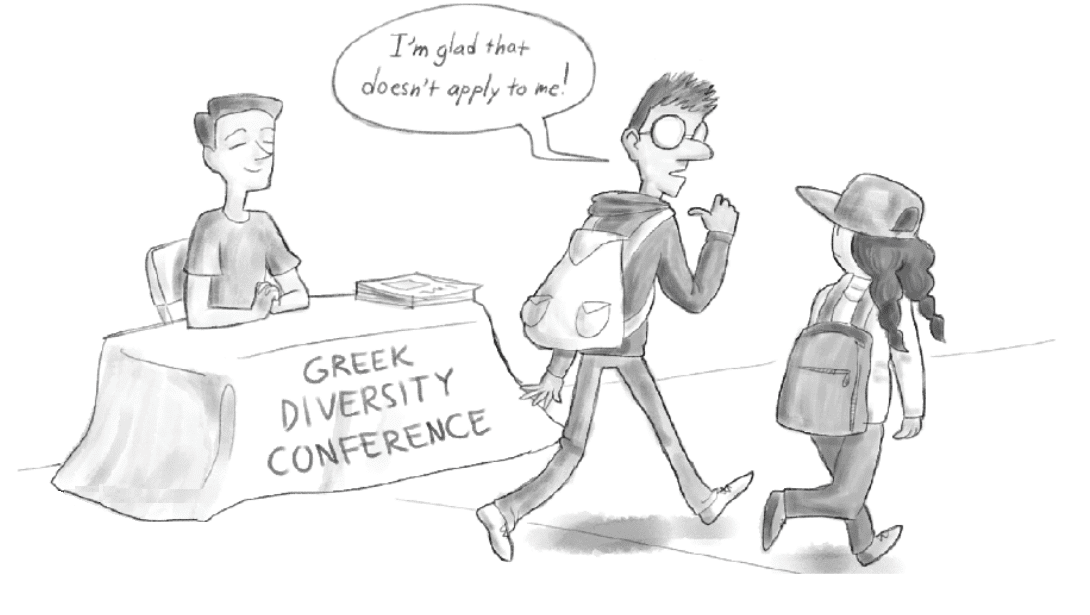 On a bright and early morning on Feb. 7, all students involved in Greek life at UCSD were required to attend a three-hour Greek Life Excel Leadership Conference, covering topics such as diversity, inclusion, accountability and leadership. However, by requiring all Greek life-associated students to attend — whereas in other student organizations, only principal members must attend — the conference implied that the only students responsible for a lack of diversity and inclusion on campus are those affiliated with a fraternity or sorority. Other individuals in the rest of the student body, however, should be educated about these issues as well. Moreover, these conferences have little impact on the school’s actual problems of inclusivity. While it is important to hold the Greek community accountable, the rest of the student body should also participate in these lessons. The requirement for students in Greek life to attend various diversity conferences throughout the year, then, should also be expected of the rest of the student body, and the method by which diversity is taught must be addressed as well. The only other individuals required to go to a separate Excel meeting are principal members of other organizations, but not the general student members. If these requirements are beneficial for promoting a better campus climate within the Greek community, then it makes sense to have non-affiliated students also attend diversity workshops.

While it is important to increase diversity and racial sensitivity in the Greek community, there are a substantial amount of requirements already in place that should also apply to the rest of the student population. Greek 101 meetings are required annually in order for students to remain a part of their fraternity or sorority. The meetings, according to UCSD’s Greek Life Annual Report, typically cover issues such as alcohol awareness, hazing prevention and sexual assault. Excel Leadership covers related topics. For Excel, if 75 percent of a chapter does not attend annually, the chapter can be shut down and unable to participate in any Greek activities.

Nevertheless, the school’s current education conferences and programs, even if they were required for all students, fail to be the most effective way in educating students about topics such as diversity and accountability. Whether at Greek 101, Excel or any other generic “educational” conference, one glance around the room reveals a scene of students on their phones, doing homework, talking with each other or sleeping. Since these conferences are mandatory, students typically only attend for this reason rather than to be open-minded and learn. Once the speaker leaves the stage, the room empties faster than beer cans at a frat party — which, to say, is very fast. Most of the content is very repetitive and is taught both via online required programs (GreekLifeEdu) and at conferences. The repetition causes the concepts to lose their value. The word “diversity” itself becomes, in the process, “nothing more than an empty slogan,” as stated by the San Diego Free Press. The school needs to produce a more effective way than this general education requirement to combat a lack of diversity.

The first question that then comes up in addressing the school’s diversity problem is identifying the culprits. One of the school’s prime examples of a fraternity diversity controversy is the Compton Cookout, a “ghetto-themed” party held by Pi Kappa Alpha fraternity (commonly known as Pike) in 2010. According to the Los Angeles Times, the party invitation included many racist stereotypes and recommended that girls use gold teeth, wear cheap clothes and start fights. The menu promised chicken and watermelon. Problems with Greek life party themes in the past have related to cultural sensitivity — a topic now heavily discussed at events such as Greek 101 and Excel. While the Greek community should take responsibility for this event, it’s also reflective of the student body at large.

The Compton Cookout demonstrates that there is an issue with racial awareness in the Greek community, but it is not limited to their exclusive organizations. This university has a lack of racial diversity in general which needs to be addressed. For example, in 2015, the amount of minority groups admitted was only two percent for African-Americans and three percent for Latinos. On the other hand, the amount of Asians admitted were 46 percent and the amount of white students admitted were 21 percent. Instead of promoting diversity with workshops, the admissions team should make feasible changes to the student body.

Students in fraternities and sororities are already required to attend various informational meetings on these topics, yet issues in diversity and inclusion are still strongly present on campus. Not only should other students be required to learn about diversity, but the programs used to teach these concepts must be radically changed in order for any drastic improvements to appear on campus. Whether that means developing hands-on programs or further diversifying the student body, it is ultimately the school’s decision.

2 thoughts on “Diversity for All”