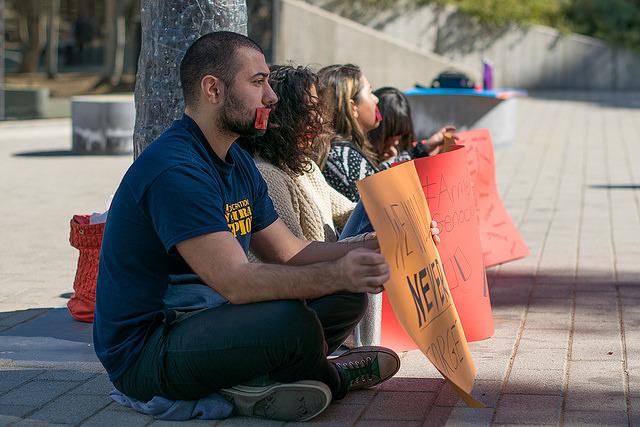 Students from the Armenian Student Association gathered in silent protest last Thursday for recognition of the 1915 Armenian Genocide. With the word “DENIAL” written on red tape over their mouths, they sat around the Silent Tree, holding posters with colors of the Armenian flag.

Thurgood Marshall College senior Andranik Kulikyan explained to the UCSD Guardian that the purpose of the protest is to increase awareness of genocide in order to prevent similar acts in the future. Within roughly seven years, over 1.5 million individuals were killed in the genocide, according to the New York Times.

Seda Byurat, Earl Warren College senior and head of ASA’s Armenian Genocide Committee, told the Guardian that the United States refuses to federally recognize the historical event given its strong military relations with the Republic of Turkey. Byurat explained that the University of California currently has over $74 million invested in the region.

“It’s still in the works, but we’re going to present a divestment from the Republic of Turkey,” Byurat said. “This resolution passed across many UC campuses—UCLA, UC Berkeley, UC Irvine, UC Riverside, just to name a few. Finally, it’s coming here to UCSD. This is our segue into bringing up divestment. Even Hitler quoted, ‘Who, after all, remembers the Armenians?’ when he was trying to get away with his Holocaust. If we keep these huge historical things under wraps, and we keep supporting governments as students, that’s not the progress we want to see in society and the world.”

According to Byurat, ASA has plans to present a divestment resolution to Associated Students, similar to resolutions that have successfully passed at other UC campuses including UCLA; the Daily Bruin reported that the Undergraduate Students Association Council at UCLA passed a resolution to divest over $65 million from the Republic of Turkey in January of last year.

Muir college junior Mariam Kutukjianand, an Armenian student, came upon the protest and appreciated ASA’s efforts to increase recognition of the genocide. She also described to the Guardian how the form of silent protest allows students to approach the topic at hand independently.

“You can talk and make a lot of lectures regarding this subject and a lot of people refuse to listen to you and hear what is going on,” Kutukjian stated. “By this visual act, they’re going to open the eyes of people. People are going to walk by, look at the posters and wonder what is going on. It’s going to drive people to actually research the subject instead of listening to people who know a lot about the subject.”

A.S. Vice President of Equality, Inclusion and Diversity Daniel Juarez told the Guardian that campus is not always conducive to organized activism.

“Even if students may not engage directly, it’s a space in which students can see other students trying to raise awareness around the issues that they care deeply [about],” Juarez said. “It’s oftentimes hard to organize on a campus that has been strategically built to suppress student protests, but the Silent Tree in front of Geisel provides somewhat of a visible place because it’s a location that many students go to.”