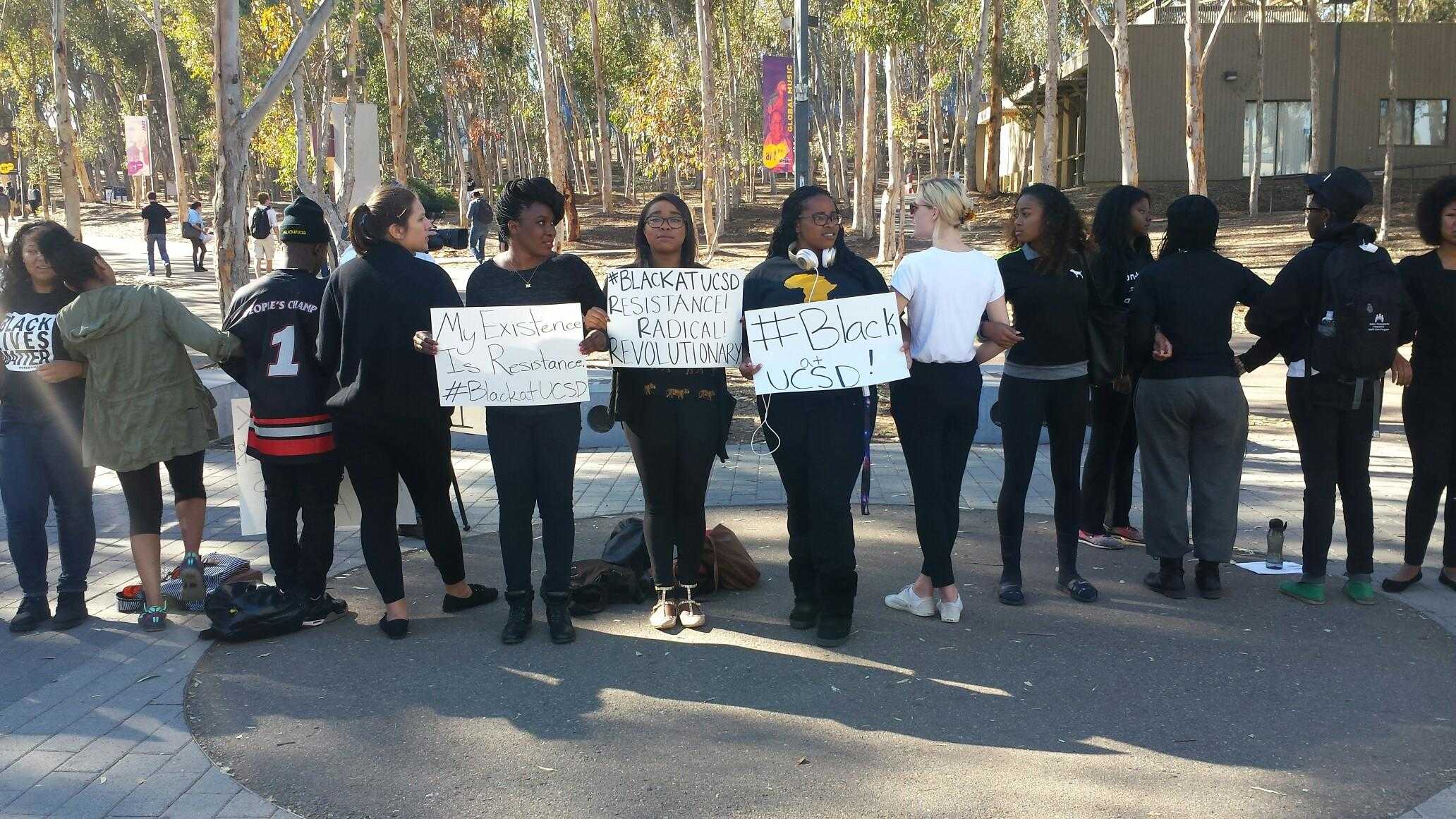 Members of the Black Lives Matter movement formed a single line on Library Walk at noon this Wednesday to stand in solidarity with black students across the country who face racism on their campuses.

The participants then proceeded to march down Library Walk at 1:30 p.m., chanting “Black Lives Matter” before stopping at the Silent Tree in front of Geisel Library. Here, they formed a circle in which students shared their experiences with racism.

The Black Student Union’s co-traditions coordinator Refilwe Gqajela explained to the UCSD Guardian that racism is a systematic problem that does affect UCSD students.

“Things that are happening to the climate at other campuses are not isolated incidents,” Gqajela said. “It’s happening institutionally. It’s happening here at UCSD.”

Student leader and Sixth College junior Ashley Emuka argued that the discomfort of spectators and passersby is indicative of their perspective.

“If you feel uncomfortable with people standing out here not doing anything, then truly your racism and privilege is showing,” Emuka told the Guardian. “It really shows who is part of this community and who is not.”

Gqajela also explained how participants used the action of closing their eyes to symbolically communicate their message.

“You may notice that some of us have our eyes closed,” Gqajela said. “The idea is that the only way to have the campus climate that we want is to imagine it.”

Assistant Vice Chancellor of Student Affairs Gary Radcliffe told the Guardian that he, as well as several members from his office, attended the demonstration to ensure that the students could demonstrate peacefully without intervention. He added that it was better to have his office there than the campus police, who may have made the students feel uncomfortable.

Gqajela disclosed that the Black Student Union hosted a town hall meeting on Monday with other leaders of San Diego’s black community to organize today’s action.

Another issue that participants mentioned was how a satirical newspaper on campus, The Koala, published articles that some consider racist.

Earlier today, UCSD administrators issued a joint statement condemning The Koala, an on-campus satirical newspaper that many have accused of publishing racist articles, and making clear that it is not funded by the university administration.

“We, the UC San Diego administration, strongly denounce The Koala publication and the offensive and hurtful language it chooses to publish,” the statement said. “The Koala is profoundly repugnant, repulsive, attacking and cruel. The UC San Diego administration does not provide any financial support for The Koala, and we call on all students, faculty, staff and community members to join us in condemning this publication and other hurtful acts.”

The statement was signed by Chancellor Pradeep Khosla, Executive Vice Chancellor Suresh Subramani and all of UCSD’s vice chancellors.