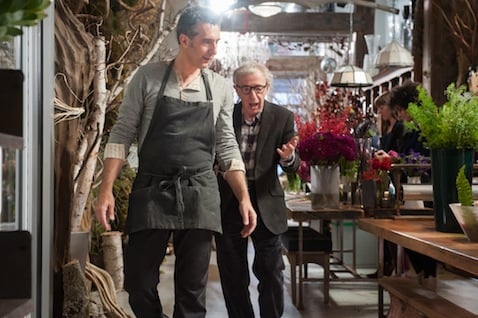 John Turturro’s comedy hits some of the right spots but is ultimately dissatisfying.

Watching “Fading Gigolo” is like eating Campbell’s Chicken Noodle Soup. There’s not enough bits of chicken, but, for some reason there are enormous chunks of celery everywhere. Like the store brand soup, this film just does not have enough of the good stuff. Fioravante (Turturro) is a soft-spoken florist. His close companion is Murray (Woody Allen), a comedic former bookstore owner and Fioravante’s soon-to-be pimp. As the two pack up Murray’s now- closed shop, the older man tells Fioravante the story of how his wealthy dermatologist, Dr. Parker (Sharon Stone), wants to have a threesome with her equally wealthy (and hot) friend Selima (Sofia Vergara) and a man. He claims that she asked him if he knew anybody who would take part (you know, just a normal conversation between a doctor and a patient) and, looking Fioravante straight in the eye, tells him that he answered yes. From this opening, the two begin a lucrative venture in prostitution while troubling the Hasidic Jewish community at large. As to why this particular community, the reason probably lies more in Allen’s influence than anything.

The chicken bits of the soup that is “Fading Gigolo” are those moments of charm. Murray’s interactions with the large black family that he lives with, headed by Othella (Tonya Pinkins), are touching. He cares for them, and when one has lice, he takes them to the Hasidic Jewish widow, Avigal (Vanessa Paradis) who treats it. Incidentally, he ends up talking her into receiving some “therapy” from a friend of his who specializes in her kind of loneliness. But, as amusing as Allen’s character is, one cannot help but be disturbed by his manipulative tendencies.

What’s worse, though, is Paradis’s acting. In her meetings with Fioravante, there’s no sex, few words, little facial expression and zero chemistry. Every line she utters is short and refuses to explain what she is thinking. It’s possible that she is supposed to be this way because of her community, which the film portrays as repressive and judgmental. The film attempts to make some commentary on isolation, or Orthodox Judaism or both. It’s hard to tell. Mostly, it just feels like something offensive is happening.

It seems Avigal serves as a foil to Parker and Selima, two sexually adventurous eccentrics. Parker seems dissatisfied with her current partner, while Selima has no particular reason to be hiring a prostitute other than perhaps his discretion. All three women seem to be looking for someone to satisfy their need for intimacy but on different levels. Fioravante’s value to the wealthy women is his accessibility and his discretion, but he is also medicine for Avigal’s loneliness. Companionship that accepts all of a person’s quirks is important. It’s on this sentiment that the film just barely gets by.

At one point, Fioravante tells Murray that his clients are “vulnerable people,” but that’s the deepest the film ever goes with this thought. It could have analyzed the strange power dynamic that is companionship for sale and the exploitation on both sides, but it chose instead to dwell on its Jewish satire. If there’s a lesson to be learned here, it’s this: If one story involves parodying an entire community and the other analyzes materialism and sex, go with the latter. That would have more bits of chicken.