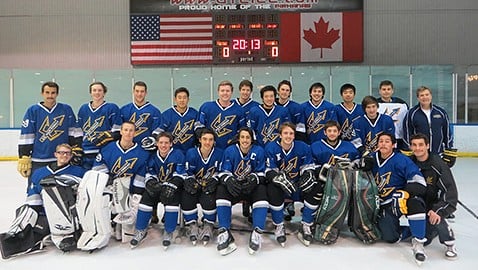 Club hockey defeated the Aggies 9-6 in its last home game of the season, as the Tritons prepare for playoffs

From the first drop of the puck, the Tritons came out swinging, eager to win its final home game of the regular season.

Despite struggling initially in clearing their defensive zone, the Tritons scored two goals in the first 13 seconds on Davis goalie Niklas Braun.

The Aggies rebounded right back, settling in their attacking zone and putting up three quick goals on UCSD senior goaltender Ryan Corriveau, including a power play goal off of a UCSD tripping minor.

UCSD put up a strong forecheck and won brutal loose-puck battles along the boards allowing UCSD to score two more goals in the first period. But Davis would once again answer back, scoring off a three-on-two breakaway to tie the score at 4–4 to end the first period.

As the second period started Davis was stagnant on the power play and was unable to capitalize before receiving its own penalty.

Neutral zone play continued as the focal point of the game in the second period with both teams going on odd-man rushes, failing to keep possession on the forecheck and letting the puck meander to center ice.

“The trick this game was to backcheck hard and make sure you’re picking up a guy. That helped us shut them down,” sophomore forward Zane Curdes said.

Eventually, the Aggies would capitalize on such a rush, scoring at about eight minutes on a two-on-one breakaway. Shortly after, the Tritons would respond twice with goals coming from Curdes off a wrist shot — his first in three games — and senior forward Benjamin Song.

Frustration set in as the Tritons piled up attempts on goal without any results. UC Davis goalkeeper Niklas Braun remained strong, keeping the game within one despite his team’s unimpressive defense. But with 2.9 seconds left, the Aggies scored off a rebound to tie the game at 6–6.

The Tritons forced contact right from the start, generating chances from the relatively undefended slot.

The Aggies defense was unable to cope with the fast-moving Triton offense and would allow another goal during four-on-four play following an altercation behind UCSD’s goal.

As tensions rose, the hits became harder and the play faster, but Davis eventually succumbed to UCSD’s dominant neutral zone play and swift passing offense. Curdes netted the final goal of the game, marking his second hat trick of the year.

UCSD will now play its final two games against Cal Lutheran and Chapman, both away games, before taking several weeks off to prepare for the Collegiate Ice Hockey Association conference championships which, Curde says, will require disciplined play to win.