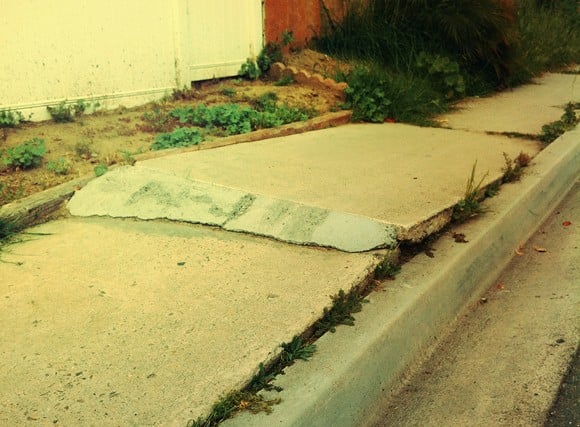 Two dozen engineering students from UCSD and San Diego State University will be hired to walk through the San Diego streets beginning mid-December to take note of places that need restoration or replacement in accordance with the San Diego City Council’s sidewalk assessment plan.

The city of San Diego has about 5,000 miles of sidewalk, much of which is cracked, worn out and in need of repair. A few roads lack any sidewalk whatsoever. According to the plan, these cases present a danger to pedestrians.

California state law holds home and business owners responsible for fixing the sidewalks outside of their own properties, but there is little incentive for them to do so. Furthermore, San Diego is legally accountable for falls caused by deteriorated sidewalks, although lawsuits against the city are often difficult to win and offer relatively low payouts, according to attorney Darren Pirozzi.

“The end result is that we have crumbling sidewalks that are trip hazards and liabilities for the city, and yet we apparently have no actual responsibility for replacing them,” City Council President Todd Gloria said in the Voice of San Diego.

Many interest groups pressured the city council to take action.

In response, city council voted on June 10 to allocate $1 million into next year’s budget for a comprehensive sidewalk study. In its report, the council planned to hire local engineering students, along with two junior engineers, to travel along the sidewalks with GPS equipment. They would track areas that are broken or missing and also determine causes of the damages and estimated costs of repairs.

Unfortunately, the city was unable to hire students fast enough, which caused a six-month delay in the plan.

“It’s the hiring process. It takes some time,” transportation official Hasan Yousef said to the Voice of San Diego.

Once the background checks are complete and recruitment is finalized in mid-December, the students will cover about a mile per day. They will start in San Diego’s older neighborhoods where sidewalk damage is the most severe, according to city spokesman Bill Harris.

“Those are the areas where we think we’re going to have the greatest areas of repair and maintenance needs,” Harris said to the Voice of San Diego.

The study is expected to take a year to complete, finishing in early 2015. During this time, the city council promised to bring up current sidewalk policies for investigation and debate.

“Ultimately, we want to revamp the policy in such a fashion that it works,” Chair of the Committee on Infrastructure Councilman Mark Kersey said.