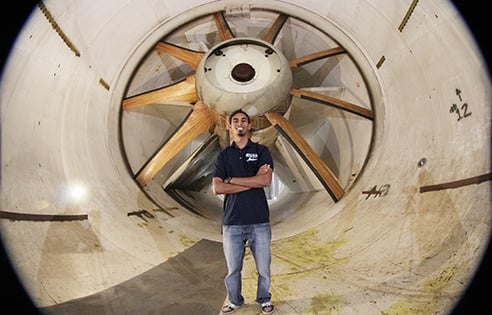 UCSD Student Deepak Atyam discusses his summer with NASA, networking and the connections he’s made

As a middle schooler, Deepak Atyam enjoyed launching model rockets and flying remote control airplanes. The Muir College junior has since taken a more serious interest in his childhood hobbies, which has propelled him (quite literally) to begin training for his pilot’s license. This was an opportunity that he was granted through his summer internship at the Virginia-based NASA Langley Research Center.

Over the course of 10 weeks beginning in June — when he wasn’t out flying — the aerospace engineering major was busy working on various projects. These involved developing models for testing unmanned aerial vehicles (UAVs) in wind tunnels, creating rapid prototypes of military UAVs and continuing work on a 3-D-printed rocket engine — an undertaking that he began a year ago with NASA’s Marshall Space Flight Center through UCSD’s chapter of Students for the Exploration and Development of Space.

But from Atyam’s perspective, the skills-based work experience was only a fraction of what NASA had to offer him as a Langley Aerospace Research Student Scholar.

“The best thing about what NASA does is that they know that you’re trying to get the most out of your experience,” Atyam said.  “So they set up tours and different types of trainings, and we [had] informational talks once a week. They understand that you’re not here just for work experience; you’re here to socialize, to network and to really learn about what the entire industry has to offer.”

Atyam wasn’t a newcomer to NASA: This was his second summer interning at Langley, and he spent the two summers prior interning at the Jet Propulsion Laboratory in Pasadena. From all of his experience at NASA, Atyam said that networking, without a doubt, has been his most significant gain.

“I’ve met many, many managers,” Atyam said “I’ve met astronauts. I’ve met so many different people that I can talk to in the future now if I ever need anything.”

Atyam conveyed how he values the connections he’s made as more than merely a source for letters of recommendation.

“[They’re] people that you can talk to for advice or that you can send an email to,” Atyam said. “They know who you are, because you talked to them personally. They understand who you are, and they remember you — and that’s the biggest thing.”

For Atyam, NASA tops the list of his favorite workplaces. The laid-back atmosphere (shorts and t-shirts permitted) coupled with the personal, authentic contact that he witnessed frequently between researchers and interns created an ideal work environment by his standards.

“It’s an environment where you’re able to express yourself very freely,” Atyam said. “It’s very open, very liberal, and most of the people there are very genuine. You’ll have people that are 60 or 70 years old — and these are people that are amazingly prominent in what they do — but if you go up to them and talk to them and ask them what they’re doing or why they’re doing it, they’ll take two or three hours out of their day just to sit down and talk with you personally.”

While opportunities to learn from mentors came easily on the job, a more daunting endeavor was working towards obtaining his pilot’s license.

“It’s not a normal thing for an intern to do, but for me, my mentor knew that I wanted to go into the aerospace field,” Atyam said. “So he told me, ‘If you want to really figure out what’s going on with everything you’re learning, you should try and put it in practice.’”

Atyam will continue his efforts in acquiring a license within the next couple of months while studying at UCSD, which he says is populated with promising individuals who generally lack a bold, go-getter mentality.

“A lot of people are very impressed when I say that I work at NASA — and the people that are over there are extremely intelligent — but the one problem I have is that students at UCSD don’t put themselves out there to get noticed by companies like NASA,” Atyam said.

Because he feels that he was very fortunate to have landed his internships at NASA, Atyam hopes to be able to pay it forward. He pointedly stressed that students should never hesitate to make any phone calls.

“Any manager that’s out there would love to talk to a student that’s interested in their field,” Atyam said. “I just find it so disheartening that there are so many strong individuals at our school that can’t take advantage of opportunities. I was able to take advantage of every opportunity that I had and would be more than happy to try to help others do this as well.”