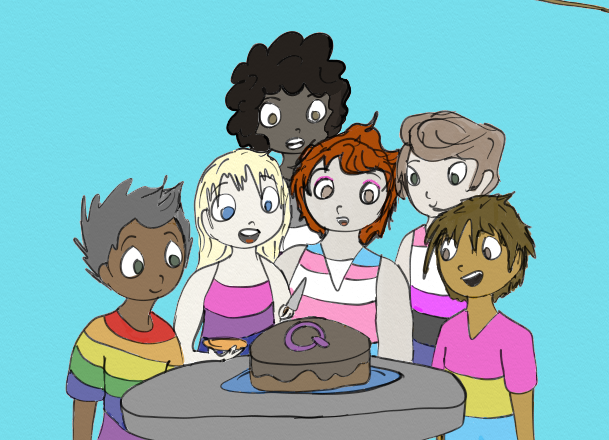 In the past decade, sexual and gender minorities have been grouped under many different names. LGBT, LBTQIA, LGBTQ+, and LGBTTIQQ2SA are all phrases currently used by major queer networks. In a world where people are identifying themselves in increasingly diverse ways, the world is struggling to find an inclusive label for the community. No matter what variation of the phrase, “LGBTQ+” is an exclusionary and unfit term for the community it is describing.

The phrase LGBTQ+ is clunky. In an effort to point out how awkward it can sound, Jonathan Rauch of The Atlantic pointed out, “Imagine if the religious-liberty movement instead styled itself the CJMHBSBA+ (Catholic-Jewish-Muslim-Hindu-Buddhist-Sikh-Baha’i-Animist-plus) movement.” Although each letter in LGBTQ+ represents an important subgroup, listing them off is a strangely complicated way to brand a community.

Because there are an infinite amount of ways someone can identify, a truly inclusionary title in the style of LGBTQ+ would include an infinite amount of letters. More young queer people don’t identify with traditional labeling. They are empowered to use more diverse and emerging terms, like pansexual or non-binary. So while many identities are part of the LGBTQ+ community, they are not all directly considered in the title.

Because some identities are left out in the phrase “LGBTQ+,” the title fosters exclusion in a community that should be centered around acceptance. Many intersex people express feeling left out of the community, especially when people use the term “LBTQ” — a phrase that became quickly outdated, but is still frequently used. Even with the more inclusive phrase “LGBTQIA+” there are thousands of different people and identities lumped into that plus sign.

This exclusion can be deeply harmful. Because people in this community are used to being discriminated against and misunderstood, this is a situation where anyone who is not deliberately included may feel specifically excluded. One asexual UC San Diego student, who wished to remain anonymous, expresses feeling less valid than other community members, saying, “Some people think asexuals don’t need the support of the community. That mentality puts us in an uncomfortable position.” Not having your letter in the title can imply your identity and your struggle is not as valid as an “L,” “G,” “B,” or “T” person.

Another issue with the “LGBTQ+” moniker is the emphasis on sexual and gender labels. Labels can be incredibly empowering for some people — being able to name your identity and find a community of similar people can help you feel less alone. However, young queer people often push themselves to label their sexual or gender identity before they are ready.

Another anonymous UCSD student says, “I don’t 100 percent like the term bisexual, so I would much prefer an umbrella term. But I feel pressured just to call myself bisexual.” The term “LGBTQIA+” implies that you must label your sexuality or gender in order to be a part of the community, and that simply is not the case. You can be questioning or unsure, and still be a perfectly valid member.

There has recently been a movement to rebrand the “LGBTQ+ community” as “the Q Community.” This movement was originally brought forward by journalist Jonathan Rauch, who also believed the term LGBTQIA+ is exclusionary and awkward. Q stands for Queer, which is an umbrella term for all sexual and gender minorities. If someone is not heterosexual and/or cisgender, then they would be considered queer by definition.

Some people avoid the word because of its derogatory connotations and its history as a hateful slur. For those people who are uncomfortable by the word “queer,” the Q in “Q Community” wouldn’t have to stand for anything if you don’t want it to.
Q is simple. It is brief. It is holistic. while some feel left out of the LGBTQIA+ community, the Q community has room for everyone.