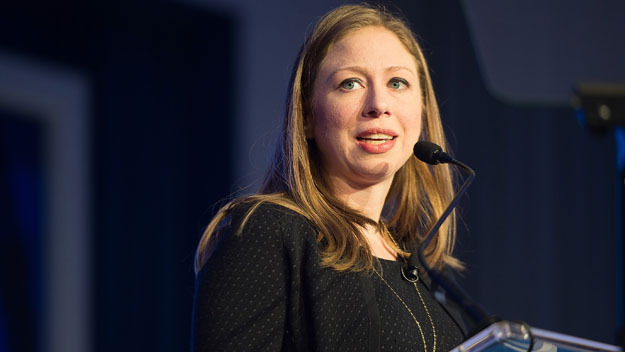 Chelsea Clinton will join the panel of Women In Leadership, held by Sally Ride Science at UC San Diego on May 22. The panelists will share their personal experiences and views on women’s roles to the nation and the world, aiming to empower women to become future leaders.

Sally Ride Science at UC San Diego is a non-profit organization founded by Dr. Sally Ride, the first American woman in space, and four other co-founders, to promote STEM literacy.

The Women in Leadership panelists invited are recognized as respected female leaders, pioneers in their own professional field, as well as important figures of women empowerment. The official website of this panel introduced their panelists as “trailblazers who have shattered barriers and  paved the way for women across the globe.”

Featured panelist Chelsea Clinton is an advocate for global health and women empowerment. As the only child of former U.S. President Bill Clinton and former U.S. Secretary of State Hillary Clinton, Chelsea Clinton is also the vice chair of the Clinton Foundation, an organization which aims to  help people create better futures for themselves, their families, and their communities. Moreover, she is a major advocate for global health issues as a board member of the Clinton Health Access Initiative, promoting access to AIDS medication.

In March, Clinton was confronted by student activists at a vigil for the New Zealand Mosque Massacre. She was criticized for her response to a comment made by Rep. Ilhan Omar that was taken by some to be anti-Semitic. Clinton’s response was considered by the students activists to stir hatred of Muslims. In the video of the confrontation,  the student accused Clinton that “This [the vigil], right here, is a result of a massacre stoked by people like you and the words that you put out into the world.”

AS Arts and Humanities Senator Johnny Echavarria echoed the sentiments brought forth by the student activists.

“When it comes to the disproportionate murder, poverty, and rape of Palestine, of poor brown people, and of Muslims, Chelsea Clinton has remained silent,” Echavarria said to the Guardian.

Clinton quoted Ride on BBC Radio 4-Woman’s Hours saying, “it’s hard to imagine what we can’t see.” To this point, Clinton said one of the reasons why she was passionate about sharing the stories of these inspiring female figures is “to encourage more girls to imagine themselves as astronauts or authors, activists, civil rights leaders, scientists, explorers, and more.”

The two other distinguished guests invited to the May 22 panel are Sylvia Acevedo and Jedidah Isler. Acevedo is a notable rocket scientist and business leader. Committed as a life-long girl scout, Acevedo was appointed as the CEO of Girl Scouts of the USA in 2017. Since she assumed the position, Avecedo has endorsed girl leadership programs and made efforts to prepare girls with the capabilities to make changes.

The other featured panelist, Jedidah Isler, is an assistant professor of Physics and Astronomy at Dartmouth College. As the first African American woman to receive a Ph.D. in Astrophysics from Yale University, Isler actively advocates for inclusion and empowerment in STEM education. She founded the STEM en Route to Change Foundation, an organization that helps marginalized minorities in STEM to pursue their passion.

The Women in Leadership panel will be held in West Ballroom of Price Center at UC San Diego from 6:30-8:30 p.m. on May 22. Admission is free but requires a registration through Sally Ride Science’s official website.