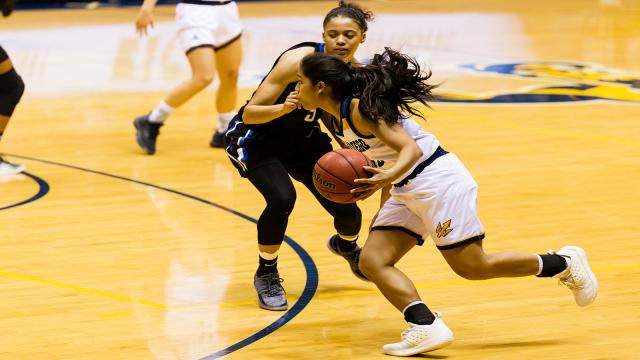 On Saturday night, the No. 6 UC San Diego women’s basketball team came up victorious once again on the road against its California Collegiate Athletic Association opponent, California State University, Stanislaus, 78–65. The team’s 14–0 start to the season makes for the program’s best start since the 2011-12 season.

The Tritons jumped out to a strong start, leading by double digits after the first quarter (23–11), and headed into halftime up 40–26. In the first 20 minutes, the blue and gold shot 38.7 percent from the field and 41.2 percent from the 3-point range as a team.

Senior guard Joleen Yang scored a 21-point lead for the team with 4 buckets from beyond the arc. Yang was also 7–9 from the free-throw line. Junior forward Mikayla Williams followed closely behind with 19 points on top of 12 rebounds for her 8th double-double of the season.

Junior forward Haleigh Hatfield was a monster on the boards as she collected a team-high 14 rebounds, 9 of which were on the offensive glass. Hatfield contributed 9 points and 3 assists in her 28 minutes of play. Junior guard Stephanie Moore and freshman guard Brianna Claros tallied 9 points apiece as well.

A slow, 12-point third quarter for the Tritons established hope for the Warriors as they trailed only by 6 points with 10 minutes remaining. However, UCSD fought back, performing a 26-point conclusion to wrap up another triumph.

Both Moore and Claros capitalized in key moments of the game, shifting the momentum in pressured situations as the clock began to wind down. A 3-pointer from each and a layup from Claros around the 8-minute marker eliminated the stress moving forward as the Tritons’ lead returned to double figures.

UCSD will look to remain perfect heading into next weekend in its matchup against California State University, San Marcos (10–4, 7–3). The Tritons return home to RIMAC Arena on Jan. 19, with the game starting at 5:30 p.m.