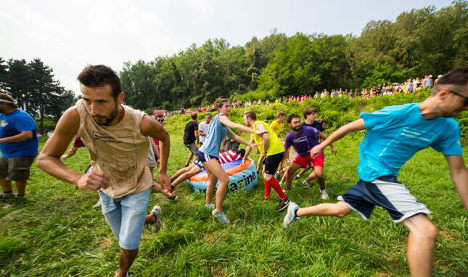 Picture this: a vast arena of varying terrain spreading out into the distance, dozens of people scattering around, finding the most obscure places to hide in, while another team begins a frantic search for them as the clock ticks ever so quickly toward zero. Sounds familiar, right? Hide-and-go-seek is a game seemingly universal to everyone who has ever been a kid; all the game requires is a handful of friends, an open space with some good hiding spots, and the imagination. So why does a game so loved by everyone have to go away as the populace transitions from youth to adulthood? There is a collective longing for the days of our youth, to find some way to get even a taste of the carefree lives we lived before entering the “lucrative” world of adulthood.

One of the few things some have held on to from their youth is sports — a fantastical realm of competition, high stakes, and wide ranges of emotions that — in the grand scheme of things — are meaningless. If we are to put such an emphasis on something that will never directly affect our lives, people ought to find a way to bring a more universal childhood game into the mainstream so that all may have an outlet to escape into when the going gets tough.

In an effort to provide greater access to the escapism of youth so many people long for, the United States needs to implement the National Hide and Go Seek League . The setup for such a national pastime would be simple: Much like with football, hockey, and soccer, competitions would be held regionally across the country, which would culminate in a National Hide and Go Seek Championship. This would be held in a different city every year. However, where the NHGSL would differ from current professional sports leagues is that it would be anything but that; teams would be open to anyone who would like to participate, and spots would be given to those who successfully out-hide their competitors on a regional basis. Fairness would be guaranteed through not allowing those who have previously been selected to do so again for a number of years.

Such an undertaking may seem broad and expansive, but the benefits far outweigh the costs. First and foremost, creating a whole new industry under the realm of athletics would offer an opportunity for cities to gain an economic boost without the associated costs. Unlike many other sports, the NHGSL would not require expensive venues which, according to research from Bryant University, leads to economic losses. The idea of hide-and-o-eek is that the best hiding spots are difficult to find, so reusing the same ones every year would defeat the purpose of the sport. Instead, hosting cities would run these events similar to marathons, where the venue is the city’s existing infrastructure. The only financial burdens the cities would have to account for would be the unavailability of the areas used during the couple hours of the event, which are minute compared to the costs of stadiums.

Additionally, the cities that host the more competitive competitions would likely see an economic boost. In 2015, the four-day weekend surrounding the Chicago Marathon had a $277-million impact on the city’s economy, which included increases of revenue for the local businesses both immediately near the race route and in the surrounding area. The larger NHGSL competitions would likely have similar impacts on the host cities, as an increase in visitors to the city would produce a short but substantial economic boost.

Furthermore, the NHGSL would provide greater accessibility for everyone to participate in athletics. Currently, the national sports industry has a certain sense of elitism; certain levels of skill and financial ability are needed in order to even begin thinking about participating in any given sport. For the most part, hide-and-g seek does not require a lot of skill to get into the game; there is a certain level of chance involved with being found, so the ability for anyone to win or lose is ultimately up to the decision-making ability of the seeker. NHGSL would open the door to mainstream athletic participation for everyone who wants to join, regardless of socioeconomic background.

Most importantly, making hide-and-go-seek a national sport would promote health and wellness for those currently without an athletic outlet. Nearly 1 in 3 people in the United States are obese, and rates of heart disease, diabetes, and other diseases with some relation to lifestyle decisions are on the rise. Because hide-and-go-seek’s increased accessibility compared to other types of athletics, the general population’s ability to obtain these benefits would increase substantially while also helping to decrease the effects of current health crises.

The joys of our youth are full of memories rooted in the carefree nature of our childhoods. By creating a new national pastime that connects everyone through a universally beloved game, the United States would create the opportunity for short-term economic boosts to cities, allow a greater access to athletic pastimes, and promote greater levels of general health and wellness. At the end of the day, life is hard, so why not run and hide from our problems every now and then.