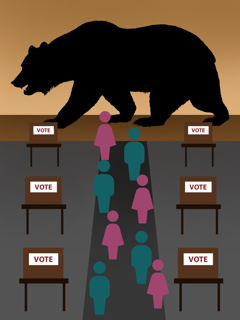 Everything students need to know about fulfilling their civic duty this November.

The United States holds elections more often than almost any other nation in the world, giving U.S. voters ample opportunities to keep their government in check. It is surprising, then, that many still find voting a complex and confusing process, and many opt not to vote at all. This sentiment is especially common among younger voters — a troubling statistic given that the youth are quite literally our future. To help streamline this process, the UCSD Guardian has worked with the Student Organized Voter Access Committee, a committee within the Associated Students of UCSD External Affairs Office, to put together this simple guide to voting in the 2018 General Election, with links to useful tools at the bottom.

In addition, A.S. Council is hosting an ongoing voter drive to help UC San Diego students get registered for the election. “Our voter registration drive this year has included several different phases,” A.S. Vice President of External Affairs Caroline Siegel-Singh said. “The first consisted of student registration at move-in, during which we netted approximately 1,200 newly registered voters from the on-campus student population. We have been tabling in [Geisel Library], as well as at various campus events for the past two weeks, in an effort to register students as they settle into Fall Quarter.” Over the next two weeks, A.S. Council plans to go door-to-door across several college residences to register any remaining students who did not register during move-in.

WHAT is the General Election?

The 2018 General Election will decide who controls the House of Representatives and the Senate. We will not be voting on a president this year, but it is easy to forget how important the House and Senate are to our government. A clear example would be none other than the recent controversy surrounding the ascension of Judge Brett Kavanaugh to the Supreme Court, which came down to a very close Senate split. If just two senators had voted differently, he might not have been confirmed to this lifetime appointment. Congress makes just as many important decisions as the president, if not more. In addition to members of Congress, many state government positions will be up for election (see the “Who?” section of this guide). This election is important for students, too — voting elevates officials who seek to address and advocate for student issues such as federal funding for public schools or financial aid. When students do not elect someone to represent their best interests, they allow these issues to be ignored.

WHEN will the elections happen?

If you miss the registration deadline, you can still vote provisionally at the County Elections Office.

WHERE can you vote?

In additional to polling places around La Jolla and San Diego, each residential college will have a designated voting place, and there will be a provisional voting room as well. Students will be able to vote on campus at these designated locations on Nov. 6:

It is important to note that you can only vote at the assigned precinct written on your voter registration card. Voters are assigned to specific precincts based on their addresses and representative districts and will be unable to cast a standard ballot at any other polling place. In cases of emergencies only, voters can cast a provisional ballot in a different polling place, but this is highly discouraged.

On provisional voting, SOVAC says: A provisional ballot is essentially an emergency method of voting if you cannot find your polling place, cannot make it to your polling place in time, or are not on the voter roll at your assigned polling place. It allows voters registered within the county to cast a ballot in a polling place that is not their own. That ballot is then held for several days after the election to ensure that the voter did not already cast a standard ballot and then is counted as soon as that determination is made. Unfortunately, at this point many of the candidates in close elections may have already conceded, so provisional ballots can have a muted effect in electing officials, though they will always count in ballot initiatives.

WHY should you vote ?

From the federal to county level, one vote affects every single person under that jurisdiction. Regardless of where your political ideology falls, the consequences of voting or not voting could be drastic. The decisions made by Congress affect the lives of everyone living in the United States.

Locally elected officials also make decisions that affect voters in more immediate ways. For example, many people might not pay attention to who the district attorney is — until they have an encounter with the law. One district attorney candidate could choose to prosecute drug charges with more leniency than another, and it is up to voters to decide which values they expect their local government to uphold and how they want to be treated by the government.

Further corroborating this point, Siegel-Singh told the Guardian, “[Voting] has a direct impact not only in choosing those who write our laws, but [it] can also directly influence legislation through the ballot proposition and initiative process. This November, there will be several key issues for voters to decide on, many of which directly affect UCSD students, including several affordable housing measures and one of the closest congressional elections in the country, the CA-49th (which includes the UCSD campus).”

WHO can you vote for?

On a federal level, all 435 seats in the House of Representatives will be up for election. UCSD is located within District 49, which has been represented by Republican Darrell Issa since 2003. House seats are up for election every two years, but Rep. Issa will not be running for re-election this time.

Within the Senate, the state of California is represented by Dianne Feinstein and Kamala Harris — both Democrats. Each state has two senators, elected in staggered six-year terms. As Sen. Harris was elected in the 2016 election, only Sen. Feinstein will be running for re-election this November.

On a state level, Californians will head to the polls to cast votes for governor, secretary of state, attorney general, treasurer, controller, lieutenant governor, superintendent of public instruction, and commissioner of insurance.

HOW can you vote?

In order to vote, you must be registered. To register online, you need a form of California-issued ID or driver license; otherwise, you must register using a paper form.

SOVAC recommends that all students registering to vote request a ballot by mail, as this gives more flexibility in the way you cast your ballot. Furthermore, the committee highly recommends that all students register with their San Diego address — in California, anyone residing here for college is considered a California resident for election purposes. You may choose to vote in your home state if you wish — just make sure you will not have to return home to physically cast your ballot. Again, if casting your ballot in person you must use your assigned polling place, and only voters registered in San Diego County may cast provisional ballots at other polling places within the county.

A tip from A.S. Council to students living on campus: the correct on-campus address is 9450 Gilman Drive, La Jolla, CA 92092, San Diego County, and you will need to list your mailbox number in the question boxes reserved for unit number.

Make sure you know which address you are registered to. You can only vote in your registered precinct, so it is of the utmost importance to check, especially if you have moved or changed addresses recently. Check your voter status here: https://voterstatus.sos.ca.gov/

This website makes it easy to apply for your mail in or absentee ballot by mail: https://www.vote.org/absentee-ballot/california/

This website tells you your California state assembly member,senator, and what districts you are in based on your registered address. It also provides information on what your California legislature has been up to, what bills have been passed or introduced lately, and when the legislature is in session — it’s helpful for staying informed: https://openstates.org/find_your_legislator/