Scripps Institution of Oceanography employee Joe Caudillo regularly posts memes and other photos to his Facebook and Instagram accounts expressing racist, sexist, and homophobic views, the UCSD Guardian learned from investigating an anonymous tip. Caudillo, who is listed as a maintenance employee in SIO’s Nimitz Marine Engineering Facility, additionally shares original and borrowed content threatening to hurt and kill women, Mexicans, and communists.

Emails from the source indicate that Caudillo’s online behavior was reported to his supervisors at SIO almost a year ago and to the Office for the Prevention of Harassment & Discrimination several times since then.

Operating under the Facebook name “Mean J Greene,” in reference to former NFL player “Mean” Joe Greene, and the Instagram handle “iyhuckleberry,” in reference to the movie Tombstone, Caudillo excludes any information that would clearly identify himself in either profile. His name on Instagram appears as “Joey,” but neither account states his full name, employment, education, or any other personal details.

Despite Caudillo’s apparent attempts to conceal his identity, a photo posted in August 2014 to his “Mean J Greene” Facebook account shows Caudillo holding a gun with his last name visibly taped to his vest. His Instagram account, which features several of the same photos of him as appear on his Facebook, also includes numerous photos with the SIO’s research vessel Sally Ride in the background. 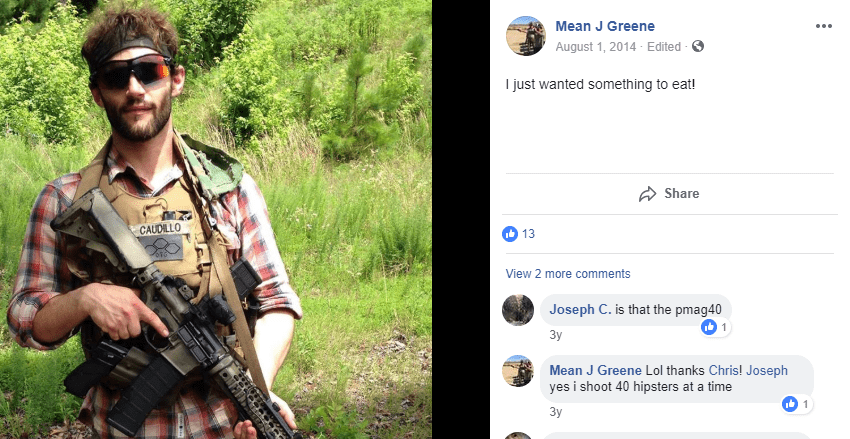 Caudillo’s Instagram posts, which date back to 2014, most prominently feature photos of fish that he caught, as well as his arsenal of guns. However, over the past four years, these photos have been interspersed with memes and other images containing anti-black and white nationalist references.

Throughout his media, Caudillo repeatedly expresses support for Rhodesia and the Selous Scouts.

Established symbols of white supremacy, Rhodesia was the white minority-ruled region in Africa that is now Zimbabwe, and the Selous Scouts were a unit in the Rhodesian Army who fought against African insurgents to maintain white dominance in Rhodesia during the 1964-1979 Bush War. Dylann Roof, the white supremacist who shot and killed nine African Americans at the Emanuel African Methodist Episcopal Church in Charleston, South Carolina in 2014, was a documented supporter of Rhodesia and published a manifesto following the mass shooting on the website The Last Rhodesian.

An Instagram post dated July 2015 clearly states “Keep Calm I’m A Rhodesian,” but other references to Rhodesia, such as a photo of the FAL rifle used by the Selous Scouts with the caption “What can an FAL and a zippo get you? Africa,” are more convoluted. In November 2017, Caudillo again implied using gun violence to conquer Africa and restoring Rhodesia in a Facebook post he shared from another account. The post contained a photo of SpongeBob holding a rifle in a glowing treasure chest with “When they say Zimbabwe is on the verge of collapse” written at the top. According to the anonymous source, Caudillo’s own caption on the shared post “BRING ME MATILDA” is about one of Caudillo’s guns that he has named “Matilda.”

Caudillo also appears with the Confederate flag on both social media platforms.

Responding to demonstrations in Los Angeles in December 2014 after the shooting of Michael Brown, an unarmed black man, by a white police officer in Ferguson, Mississippi, Caudillo posted a photo of his middle finger and what appears to be a helmet with a Confederate flag patch on the back and wrote, “Hey LA protestors, come try and burn this flag #f-ckyou #millionmarchla #nojusticenopeace #ferguson #killhippies.” 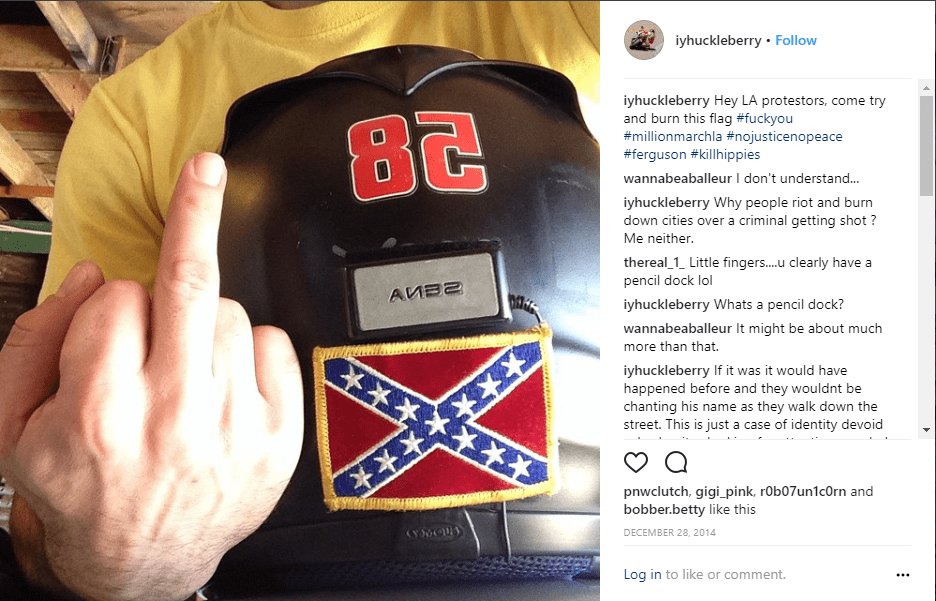 In July 2015, Caudillo wrote “#SHOOTHER” as the caption for a meme depicting a man hiding under a table from dinosaurs, meant to represent women on their periods. Later, in September 2017, Caudillo captioned a photo of a bottle labeled “Pumpkin Spice Chloroform” with “when you like white chicks but they don’t like you,” using the stereotype that white women like anything containing pumpkin spice to joke about rendering women unconscious for not returning his romantic interest. 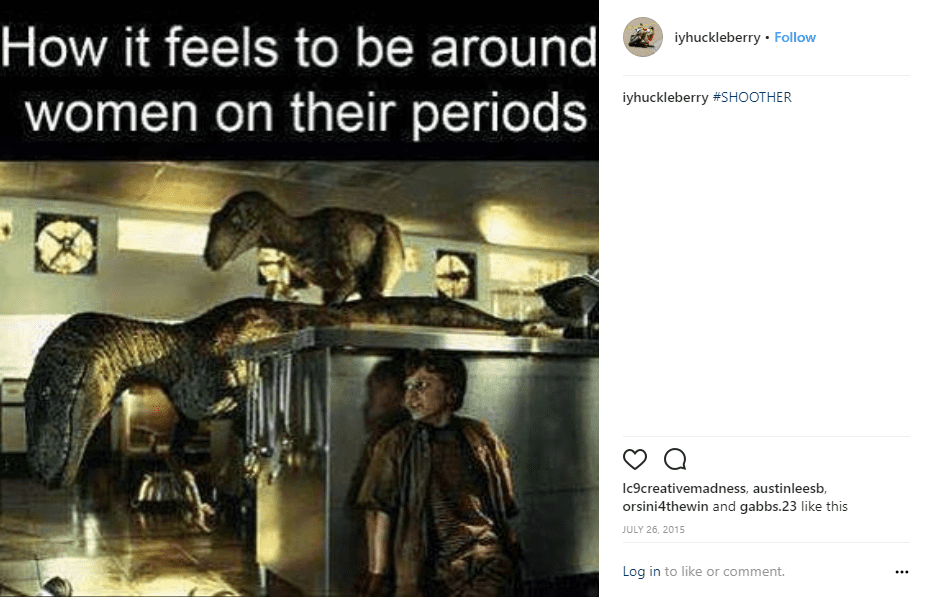 In addition to posting about shooting women, Caudillo shared a photo  of himself holding a rifle in February 2017 stating that he was “patrolling for jack rabbits (mexicans).” 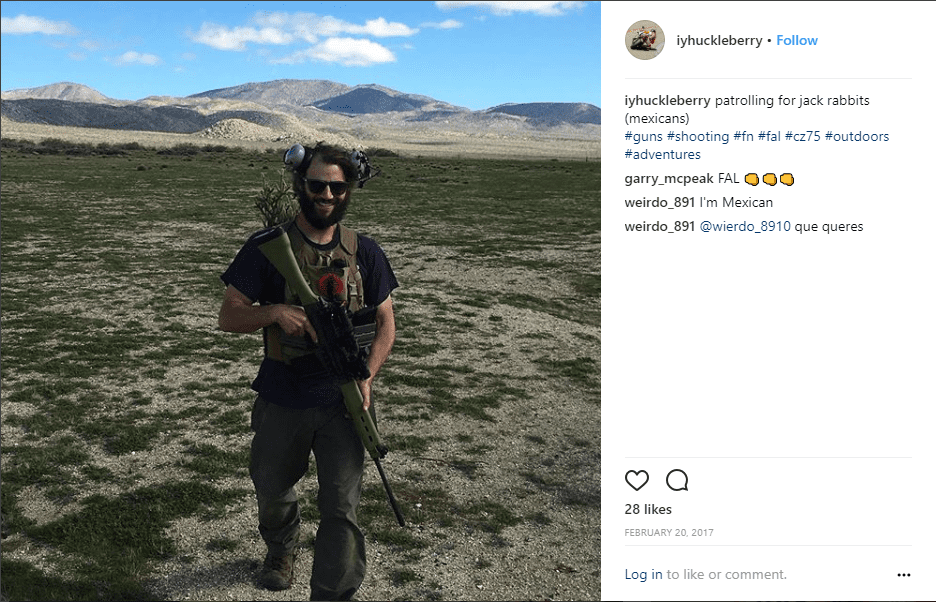 The most frequent target of Caudillo’s Instagram posts propagating violence, however, are communists. In one photo, the sentence “I want to break things and hurt communists” appears on a white background with “#lifegoals #dreamjob #berniesanders” as the caption, suggesting that Caudillo considers U.S. Senator Bernie Sanders as a communist and would like to harm him. In another post, a meme shows Pepe the Frog, which the Anti-Defamation League says is a popular figure in bigoted memes,  reading a book titled “Reasons to Live” that lists only one reason — “Killing Commies.”

A third post to Caudillo’s account from April 2017 is a meme in which a soldier responds to the statement “you can’t just napalm villages” with “that’s where you’re wrong kiddo.” A chemical substance that melts human flesh, napalm was a popular weapon of the United States during the Vietnam War,  which was started to contain the spread of communism. The meme refers to the many instances in which the United States would use flamethrowers with napalm on entire villages.

On Jan. 9, Caudillo called a coworker a homophobic slur, posting “a lady at work just told me I look good. What a fag.” on a rainbow background. In the comments section of a March 2017 photo of Caudillo’s stockpile of weapons, Caudillo again referred to someone as a “faggot” and used the terms “jewed” and “jewing” as slang for being screwed over in a weapons deal.

Lastly, Caudillo insinuated that Asians are rapists in a photo of a paragraph describing multiple Asian men committing sexual assault against a woman and comments, “fucking Korean rape gangs” and “raping my nostrils with their kimchee.”

In addition to alerting the Guardian to Caudillo’s social media behavior, the anonymous source provided evidence that multiple SIO employees and members of the UC San Diego administration were made aware of Caudillo’s posts.

On Aug. 16, 2017, the anonymous source reached out via email to SIO Associate Director Bruce Appelgate, Captain Zoltan Keletey, and two other employees at the Nimitz Marine Facility where Caudillo still works alleging that Caudillo made racist, homophobic, and violent statements and provided screenshots of some examples. In response, Port Engineer Paul Mauricio informed the source that “we take this seriously and are addressing this through the University system.”

SIO Director of Strategic Communications Lauren Wood stated that “[SIO] and [UCSD] strongly condemn and oppose and condemn all forms of hate speech. The views in this employee’s social media profile are offensive and do not reflect the views of [UCSD].” However, Wood declined to elaborate on the actions taken regarding the source’s complaint but noted that since being contacted by the Guardian for a response to Caudillo’s social media, the administration referred the information to the Office for the Prevention of Harassment and Discrimination.

“As a matter of policy, UC San Diego cannot comment on individual personnel matters,” Wood said. “However, we forward all complaints of potential harassment or discrimination to the Office for the Prevention of Harassment and Discrimination. We can confirm that we forwarded this matter to OPHD for review and assessment of potential University policy violations, and appropriate follow up action was taken by OPHD and [SIO].”

Emails from the anonymous source reveal, though, that OPHD was already contacted in January and May of 2018 regarding Caudillo’s online activity, and on both occasions, the office refused to offer any information on the outcome of the source’s report.

The responses to both OPHD complaints read, “Thank you for reporting this incident to the Office for the Prevention of Harassment & Discrimination. Our office will conduct a review of your report for potential UC policy violations.”

Although Caudillo’s behavior was reported to OPHD, Wood noted that university employees’ right to free speech protects the opinions expressed in their private lives.

“As a public university, [UCSD] is obligated to uphold the First Amendment, and although the views expressed in this employee’s social media posts do not reflect the views of the university, all campus community members have the right to express their personal views in their private lives , and at appropriate times, in appropriate places and manners.”

The main image is a photo uploaded by Caudillo to his Facebook.