The Muslim Student Association, in collaboration with Students for Justice in Palestine, staged its annual “Justice in Palestine Week” last week by lining Library Walk with large wooden boards dedicated to different issues facing Palestinians and discussing them with passing students. Tritons for Israel also put up a wooden board covered with handprints from various students throughout the week as they sought to present their narrative of the Israeli-Palestinian conflict as well.

The wooden boards stood along the edge of the walkway in front of Price Center, each dedicated to a specific aspect of the Israeli-Palestinian conflict such as Zionism, the Palestinians’ loss of land, the wall separating the populations, and the Israeli government’s checkpoints.

The conflict between the Palestinians and the Israelis is the result of a territorial dispute over who controls the land upon which Israel is currently situated. Beginning in the latter part of the 19th century, European Jews became increasingly convinced that they needed a state of their own. So from 1896 to 1948, and particularly during the Holocaust, hundreds of thousands of Jews relocated to the predominantly Muslim Palestine, which at the time was a British mandate.

Considering that both populations believe that the region is their religious homeland, violence ensued, which has continued to this day. In the time since the conflict began, Israel has been internationally recognized by the United Nations as a legitimate Jewish state, and many other countries have become involved in the dispute with Israel currently controlling most of the land.

The Thurgood Marshall College senior who served as the co-head organizer of Justice in Palestine Week requested to go unnamed so as not to be listed on a website called “Canary Mission,” which tracks Palestine supporters and could adversely affect her family and her future career opportunities. She explained that last week marked the 70th anniversary of Nakba Day, which was the displacement of Palestinians and the beginning of their occupation and oppression.

“The goal [was] to spread awareness about the occupation that has been going on,” the organizer explained. “It [was] to have intersectionality.”

The Muslim Student Association and Students for Justice in Palestine put up a 100-foot “wall” on Library Walk with information about the current situation, which was cited with sources at the bottom of the panels.

“It [was] a mock apartheid wall,” the organizer said, referring to the actual separation barrier that was constructed in the West Bank by the Israeli government beginning in 2000. “Israel has built a wall that has separated Palestinians, but we [took] what they use to oppress us and spread information. It is a tool to educate people.”

The organizer also emphasized the importance of formulating your own opinion.

“Do not be blind when looking at facts,” the organizer advised. “When the media says an Israeli soldier killed, look into facts. Be cognizant of the world around you.”

Situated near the Career Services Center on Library Walk, Tritons for Israel responded to Justice in Palestine Week with their own activities. Their primary display was a large white wooden board that students could place their painted hands onto to leave a print.

Vice President of Advocacy and Marshall College student Alex Reguev explained the mission of their organization and the reason for their presence.

“Tritons for Israel is a cultural organization that tries to promote love, peace, and coexistence,” Reguev told the UCSD Guardian. 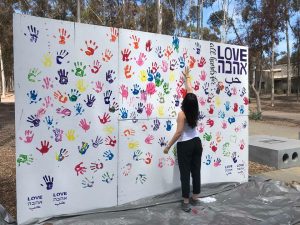 The board said “All hands for Love” and was meant to show the Israeli side of the conflict, Reguev noted.

Reguev stated that Israel is there to protect its citizens and anyone that comes into the country.

“There exists terror and incitement that led to the unfortunate situation in Gaza and West Bank that have harmed civilians,” Reguev said. “The conflict has been perpetuated by so many third parties, and there is a tendency to solely blame Israel for the lack of peace.”

Just like the Justice in Palestine Week organizer, Reguev also emphasized that it is important for students to make their own opinions with the facts.

The first day of Justice in Palestine Week, May 14, also marked a controversial development in the conflict when the United States officially moved its Israeli embassy from Tel Aviv to Jerusalem, which both parties claim as an important religious site. The United States’ decision to relocate the embassy demonstrates that the government agrees with the Israeli belief that Jerusalem is its holy city.

“It happened,” Reguev said, “[and] it didn’t change day-to-day life in Israel. It was more of a political move.”

The Justice in Palestine Week organizer, however, believes the move has negative ramifications.

“It is an insult and hinders the peace process,” the organizer told the Guardian. “No other country in the world has an embassy in Jerusalem, which shows how America is biased toward Israel.”