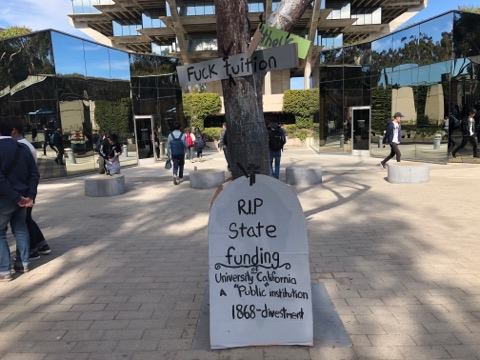 Students protested the tuition hike when it was first introduced in January. Photo by Robert Ramji.

The UC Board of Regents will not place a vote to increase in-state tuition by 2.7 percent on the agenda for their meeting next month and will instead pursue more funding from the state government, the UC Office of the President announced today in an email. The 2.7-percent increase was originally proposed in January along with a 3.5-percent nonresident tuition hike, which has since been approved, but the Regents agreed to postpone the votes to May and March, respectively, after backlash from UC students and politicians.

The Regents may place the resident tuition increase back on the table, however, depending on how much funding the UC system receives from the 2018-2019 state budget. While the budget has yet to be finalized, the initial draft released by Gov. Jerry Brown on Jan. 10 allocates approximately $3.7 billion in state funds to the university, which constitutes a 3-percent increase from last year’s funding.

“While the [university] appreciates the 3-percent increase, that amount remains far below what is needed to address critical issues such as unprecedented student growth, increases in instruction and student services, and pressing deferred maintenance needs,” the statement released by UC President Janet Napolitano and Regents Chair George Kieffer said.

Aiming for a 4-percent increase in order to respond to increased enrollment and the need for improved on-campus resources, the Regents indicated that they viewed this 3-percent increase as insufficient when it was first announced and that it was what led the Regents to consider tuition hikes to begin with.

According to the statement, “the student-led advocacy efforts, done in concert with UC faculty, all ten campuses, and stakeholders throughout California” are attempting to gain an additional $140 million from the state. The email made no mention of specific actions the UC administration plans to take to secure more funding.

The budget will likely be negotiated until the June deadline for approval, so it is expected that the UC Regents will revisit the issue of a tuition increase then.