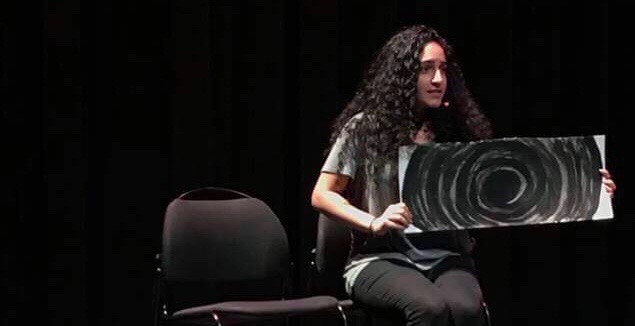 The 22nd annual student-run show “The Vagina Monologues and TheirStories” wrapped up on Monday night after a weekend of performances.

“I thought it was a great show,” cast member Jordan Krikorian said, referring to last week’s performances. “I think everyone knew their pieces, and it ran smoothly. … Half of the pieces were student pieces, so that’s really cool to see. I thought it flowed well, in general.”

Although the show did not sell out, “Vagina Monologues and TheirStories” sold over 1,000 tickets; the sale of about 600 tickets was required to break even. The production also sold out its new merchandise.

All proceeds of the show are sent to two foundations. Break the Silence Against Domestic Violence is a national organization that provides workshops and conferences for survivors of domestic abuse. License to Freedom, a foundation based in San Diego, provides services for immigrant and refugee survivors.

The show features a broad range of stories from serious to comedic pieces that touch on topics such as race, sexuality, and femininity.

Some pieces involved audience participation. “Black Girl” was a monologue that also required the audience to repeat the names of black female victims of police brutality. During “Reclaiming Cunt,” viewers were encouraged to yell out the word “cunt.”

“Last year they added custom scripts made by students on campus, and they added [them] to the play, but then this year they wanted to be a little bit more inclusive because they got a lot of critique on that, so they changed it to ‘TheirStories,’” Merchandise Chair Sriya Podila commented.

The 2018 cast focused on being more inclusive for transgender people, asexual people, and people of color.

“I also think there was a larger focus on intersectionality, rather than just the white feminism of the original script,” Show Photographer Alyssa Zamora added.

“I decided to direct because the directors last year did a really good job with ‘HerStories,’ but there were a lot of issues, which we didn’t completely fix this year,” Lorenzo said. “We worked really hard to try to address some of them, in terms of the space being transphobic and the monologues being really vagina-centric, even though it is ‘The Vagina Monologues.’”

She explains that the crew is hoping for “more student pieces to phase out more monologues” of the original script and add in personal, diverse stories from the UCSD community.

“It’s also important that we’re flexible with the way that things are written,” cast member Cassidy Paradis said. “There’s a line in ‘The Woman Who Loved to Make Vaginas Happy’: ‘I love vaginas. I love women. I don’t see the difference between them.’ The line was changed to just ‘I love women.’ It keeps that person’s story relevant without the exclusivity.”

The monologues themselves were empowering to the cast and crew.

“I always considered myself a feminist, but I don’t think I really fully understood the concept; but right now I feel like I’m more educated, and in a way, it kind of heals me as a person of my past experiences because of the fact that I understand why our society is the way it is,” cast member Songnim Na said.

Eleanor Roosevelt College sophomore Manda Meach shared her thoughts on the show. “Each monologue had its own unique story to tell that relates to some of the issues many women go through in society. It was interesting how personal these stories were and how I was able to relate to some of them unexpectedly,” Meach said.

The crew encourages “any student who identifies as anything other than a cis-male” to submit their own stories through the link on the Facebook page for next year’s production.