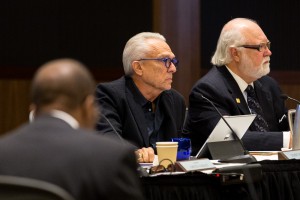 After stating in an interview with The Daily Californian this past November saying he would not resign, University of California Regent Norman Pattiz has stepped down from his post following multiple demands calling for his resignation and leaked audio of him asking comedian Heather McDonald to hold her breast.

The PodcastOne Founder is known to have made multiple sexual remarks towards his female employees and also to have waved a gun at one male employee as means for intimidation. However, Pattiz has only taken responsibility for the comments made towards podcaster and comedian Heather McDonald, who reportedly quit after Pattiz made the remarks.

Pattiz recently sent a letter to Regents Chair George Kieffer stating the he would step down as UC Regent effective February 16, 2018. Pattiz expressed his gratitude for his 16 years working for the University of California and Kieffer, in return, thanked Pattiz for his service.

“I want to express my deep appreciation for the years of service you’ve given to the University of California, particularly in connection with the management of the national laboratories,” said Keiffer in his response letter to Pattiz. “We will miss that experience as well as your deep understanding of the issues facing higher education in general.”

In either letter, there was no apparent mention of the multiple allegations of sexual harassment posed against Pattiz during his time as a UC Regent. Kieffer ended his letter hoping that their “friendship will continue”. Furthermore, Kieffer acknowledge that Pattiz would be there when needed and called upon by the University.

UC President Janet Napolitano and the UC Board of Regents have yet to issue any sort of press release or public statement on Pattiz’s resignation.