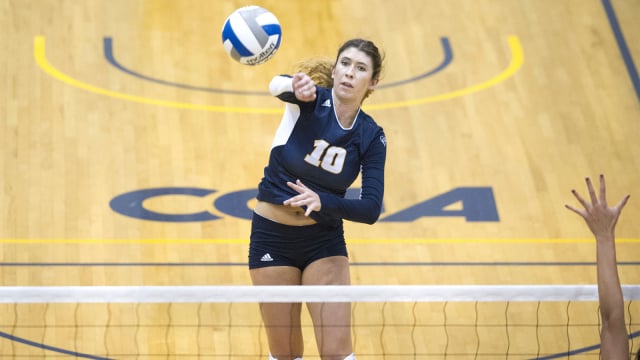 The two teams traded points in the first set. With the game close at 20–21, Cal State East Bay made a three-point push to reach game point, 20–24. UCSD answered back with a kill, but the Pioneers took the next point with an easy kill of their own.

The Tritons looked to rebound in the second set, but lost a 17–11 lead that all but took the wind out of their sails. Despite losing their six-point lead, the Tritons fought back to tie the game at 24–24 late in the second set. With their backs to the wall, the Tritons made an attack error and saw themselves on the receiving end of a Pioneer kill to end the set.

UCSD never regained its momentum. Cal State East Bay took a quick seven-point lead in the final set. The Tritons tried to put up a fight, but it was to no avail. Unable to regain the lead, UCSD dropped the third and final set, 19–25.

The Tritons were playing without their starting setter, sophomore Marie Paris, who was out due to injury.

UCSD finished the season on a sour note. Hopefully, the Tritons will enter the offseason and come back stronger than ever.