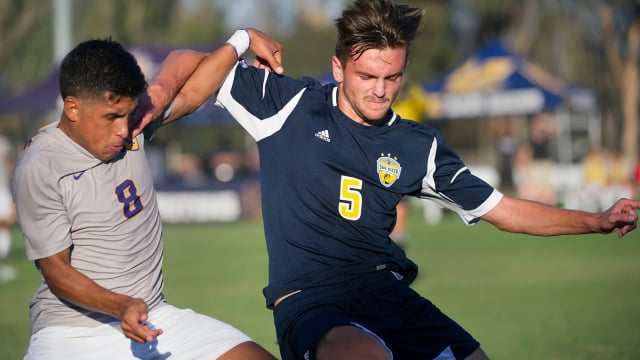 After dropping down to the third seed in the California Collegiate Athletic Association standings, the UC San Diego men’s soccer team was forced to play in the first round of the CCAA conference tournament. Unfortunately, the Tritons’ hopes of ending the weekend with a second straight conference tournament title ended on Tuesday night with a 1–0 upset loss against sixth seed San Francisco State. With the loss the Tritons had their 11-game unbeaten streak snapped, at a time where a loss has real consequences, unlike the regular season.

The game remained scoreless throughout the first half as both teams failed to create many chances. San Francisco State dominated the game as they took it to the Tritons throughout Tuesday night. It took until minute 49 for the first goal to fall in and it came off a long throw in from the Gators. The throw in came from the left side near the corner and the Gators were able to get a flick on and freshman Feliciano Cardenas instinctively reached for a header and was able to get it passed the Triton goalkeeper. Cardenas’ header came to be the match winner and the Tritons could not muster up a response as they could not get anything in the final third.

After going down 1–0, the Tritons attempted to take more initiative on the offensive end, however it became difficult after the goal as the Gators sat back and defended in numbers.  The defensive-minded approach by the Gators in the second half worked out perfectly and sent the Tritons crashing out of the tournament.

Now, the Tritons will rest their hopes on a spot in the NCAA Division II tournament; the field of 38 teams will be announced on Monday, Nov. 6.