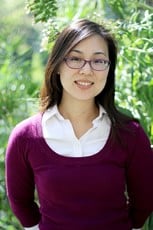 “I think that’s ultimately the value of literature in general, that it gives us another avenue onto another way of thinking. I think Pacific poetry adds to that. It gives us other ways to think, other tools in which we can think about it and perceive the world around us.”

In the world of Professor Erin Suzuki, literature has taken a steady hold. More than just the subject she teaches or the career she has chosen, literature has become her perspective on life.

Having always been surrounded by books — with even her mother being a librarian — Professor Suzuki has followed her interest in reading and literature to her current seat behind the professor’s podium. Here, she has not only grown in her love for the written word, but has also found her own unique niche in the world of books and stories.

The first day of the new quarter is a day that can be heralded as just one example of Suzuki’s distinct style of teaching. It was with a small smile that Suzuki managed to integrate into her lesson one of the last things one would expect to hear in Warren Lecture Hall: a Kanye West song.

In a way, this represents much of what Suzuki as a professor has been through and the unique perspectives she has found through the study of literature. Suzuki was born and raised in Hawaii. After graduating from high school at Punahou School in Honolulu, the same school Obama had attended, Suzuki left the warm, tropical island and headed to the opposite side of America: to Brown University. Here she completed her college degree and started a job soon after at Random House, a publishing company. But, after working in publishing for three years, Suzuki left to go pursue her PhD at UCLA.

“I missed a lot of the work that I was doing when I was in college,” Suzuki remarked. “I graduated with a degree in literature and then I went into book publishing. And I really thought that was where I was going to work on my career. But, you know, book publishing is a little bit different from studying and analyzing literature … I missed the classroom and being able to have these kinds of dialogues about novels and ideas and the kind of dynamic that emerges out of that situation.”

It was at UCLA that Suzuki found her place in the world of literature. While studying for her dissertation one day in a Honolulu library during the summer, she found herself talking to one of the librarians about Herman Melville (her dissertation subject), a famous American author. But, as the librarian began talking more and more about the vast amounts of Pacific-Islander literature the library had, Suzuki found a new inspiration. Instead of being the thousandth person to do an essay on Melville, why not study Pacific-Island and Asian-American literature?

It was with this sense of realization that Suzuki began her career as a professor, first at Emory University and then, eventually, making her way to the sandy shores of UC San Diego.

“What I think drew me particularly to this campus is because … there is a growing interest in [Asian-American literature]. I think here there are many more students who are interested in the field, who are interested in developing projects and just doing research in the field of Asian-American literature … And that makes it great for me, to have a lot of people to work with, people who are curious and passionate about the field and the literature and doing some research in it,” Suzuki commented.

So what makes Pacific Island literature different than the traditional Western literature that is usually studied in class? Fittingly enough, it is in the very thing that makes all literature unique: the way the writers think.

“Pacific Island literature is [unique because] it really engages a lot of our relationships and responsibilities to nature, each other, and our changing global realities … To really read all of these poems is not just about trying to uncover their ‘true’ meaning or find new information about life. And I think that’s ultimately the value of literature in general, that it gives us another avenue onto another way of thinking. I think Pacific poetry adds to that. Reading it gives us new [ways to] relate to the world around us.”

For people like Suzuki, literature is a way of thinking. While history and science tell her stories about the world in their own ways, literature provides the tools to analyze and often question what she perceives to be the norm. In a way, literature to Suzuki is a continuous reminder that hers is not the only perspective on life. Whether that takes the form of a Kanye West song or poetry by Asian American and Pacific Island poets like Lois-Ann Yamanaka, Theresa Cha, Haunani-Kay Trask, or Jetnil-Kiiner, Suzuki is constantly learning and sharing new things.