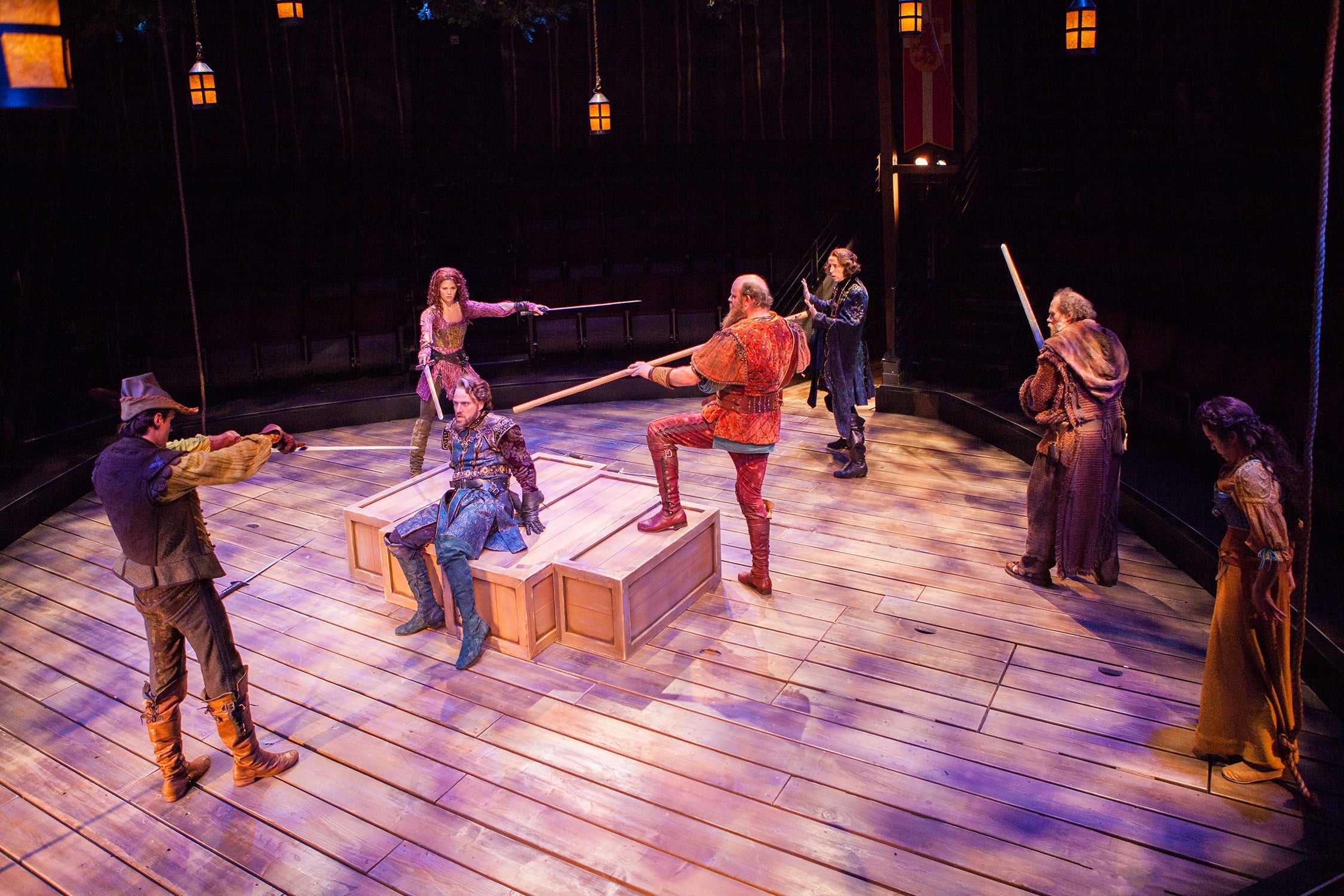 We sit in a dark room, waiting, then… Friar Tuck (Andy Grotelueschen) bursts onto the scene, loudly declaring that he will tell us about the life and times of one Robin of Loxley (Daniel Reece), more popularly known as “Robin Hood.” Like any good storyteller, he starts at the beginning — with Mrs. Hood delivering our hero, screaming and shouting as her husband tut-tuts his foot and asks her to be done with it. Then pop, and Robin’s out! A midwife proudly holds forth a plastic doll for all the audience to see.

Suffice to say, this is your dad’s Robin Hood: Ludwig wisely cops to the innate comedic undertones of the legend and follows in the footsteps of such esteemed works as “Robin Hood: Men in Tights,” and Disney’s “Robin Hood” (1973).

Once again, Robin is a rakish ne’er-do-well and slacker who wastes his days drinking, gambling and loving women. Only when he sees a peasant, Doerwynn (Suzelle Palacios), accosted by the thuggish Sir Guy of Gisbourne (Manoel Felciano, sneeringly villainous) and ineffectual Sheriff of Nottingham (Kevin Cahoon), does Robin spring into action. From Doerwynn, Robin learns of the strife of his people — the Anglo-Saxons — under Norman (and, by extension, French) rule. Mortified, he swears to wage a campaign against the injustices inflicted upon his homeland.

What follows is a well-worn tale of heroism and self-discovery, where the hero learns to respect women, to (somewhat patronizingly) empathize with the poor commoners and to stick up for the little guy. It’s all fairly classic Robin Hood, rob-from-the-rich, give-to-the-poor guff, but Ludwig makes the entire exercise so thoroughly fun it’s impossible to fault him for its rote narrative backdrop. A particular standout is Michael Boatman, who does double-duty as Prince John and a host of other characters, making the classic villain a Falstaffian schemer with delusions of playwright-hood and a curious tendency to riff on famous characters from Shakespeare. Boatman imbues his avaricious prince with such comic gravitas that he all-but steals the show and is only matched by Grotelueschen’s Tuck, a mad drunkard who occasionally moonlights as a “monk.”

Maid Marian (Meredith Garretson) stars as the long-suffering but ever-so-skilled female counterpart to Robin Hood, his rival and childhood friend. Where Reece plays the blundering fool, she is his sighing straight-woman. Every scene, no matter its dramatic weight, involves some winking, puckish repartees between the cast.

“Robin Hood!” lives and dies by its characters; as such, Ludwig has focused on costuming, furnishing the cast with distinct, detailed attire. As if to emphasize this, there are neither curtains nor distant stages here; Ken Ludwig has designed his “Robin Hood!” for the intimate Sheryl and Harvey White Theatre, a snug room where actors weave through the audience to stand on a central platform, close enough to occasionally brush up against seats. It’s a thrilling experience and a unique setup that Ludwig exploits to maximum effect. Clever usage of the scenery enhances the occasionally silly sequence, like a full-blown castle siege recreated using only a few spare blocks of wood and lighting.

Despite this, the stage never feels cramped or claustrophobic — just big enough to accommodate the grandiose personages which strut the field. Even as Ludwig wags his thumb at traditional theatre, he graciously acquiesces to certain elements; modern plays strive to confine characters to rooms, houses, and afternoons, but Ludwig allows his characters to roam as far as northern castles and age from children to adults. Why, it’s positively Shakespearean!