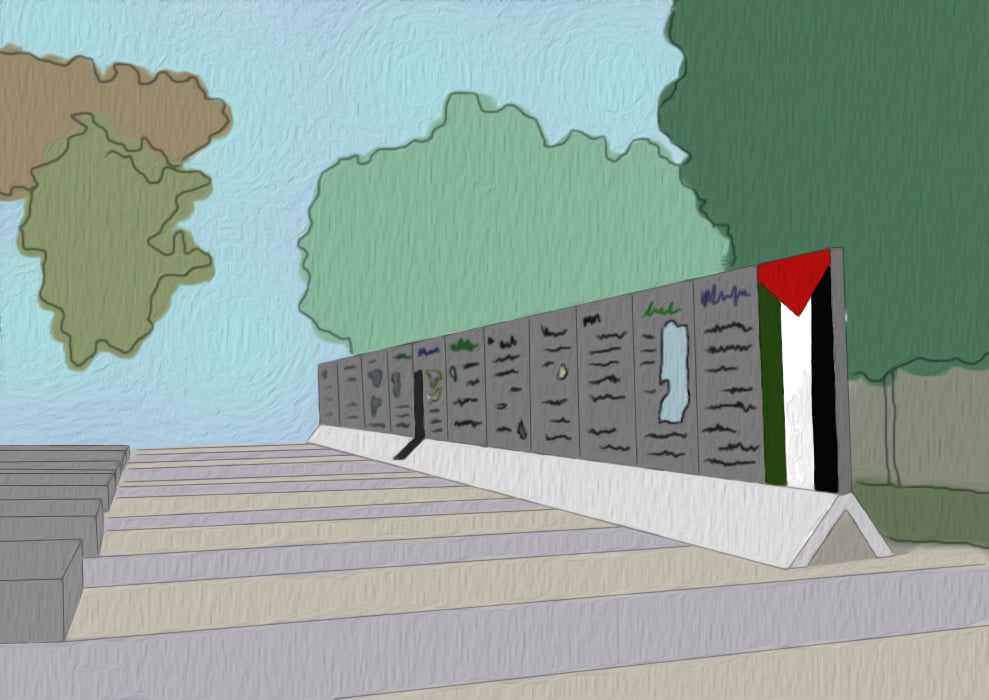 Every Spring Quarter at UC San Diego, pro-Palestine groups on campus dedicate a week toward advocating their stance on Middle Eastern politics on Library Walk and around campus, naming their advocacy as “Justice for Palestine.” In response, pro-Israel activists set up their own booth, and call it “Israel Solidarity.”

The Muslim Student Association and Students for Justice in Palestine UCSD organizations both work together in order to advocate on Library Walk from May 15–18, erecting a wall filled with statements about what it means to be a Zionist (“the three basic characteristics of Zionism are: racism, expansionism, settler colonialism”), comparisons likening Israel to an “apartheid state,” and connecting the treatment of Palestinians to movements such as “Black Lives Matter” and the U.S. Mexico border.

The statement “Free Palestine” was written in chalk symbolically in front of Silent Tree, and walking down Library Walk, one can witness students reading the wall thoughtfully, and engaging in conversation. The strong beliefs and passions that inspire student activists to dedicate their time toward a cause that is personal to them is evident both through the art and efforts clearly displayed on the wall, as well as the engaged dialogue of students surrounding the booth.

Meanwhile, set up less than 30 yards away, a booth set up largely by Tritons for Israel and Hillel intends to inform students on an alternative narrative, with displays offering a different definition of “Zionism” (“the social justice for the Jewish people,” namely as an end to the Jewish Diaspora), and a bolded statement, reading “Israel is NOT an Apartheid state.”

Speaking with student leaders on either booth, one thing immediately became clear: while the subject matter is controversial, the goal of activists at both booths is to educate students on an issue that many feel does not affect them, and to promote peaceful discussion.

Eleanor Roosevelt College junior Khaled Ahmad, talked to me about how the issues surrounding Justice for Palestine week personally affect him and his family. Ahmad is the son of Palestinian refugees from Jordan. His father moved to the U.S., where Ahmad was born, when he was 18 years old. He describes pro-Palestinian causes as being “rooted in [him] since birth.”

Ultimately, his goal in volunteering his time on Library Walk and at campus events is not only to inform and educate UCSD students on the politics of the Middle East, but to allow “people to form some attachment” with a political issue they may have never encountered or have been educated on.
In order to further educate students, Students for Justice in Palestine organize a series of events throughout the week — ranging from panels on student activism, a “Palestine 101” lecture with Professor Erakat from George Mason University and a movie night, featuring the war documentary “Five Broken Cameras.”

But educating students in this way inevitably exposes a bias; a bias that neither booth can avoid. Ahmad says that his goal is to inform students about the “other side” of the Middle Eastern story — the side that, in his opinion, often goes unheard. “There’s a huge humanitarian crisis going on in Palestine,” Ahmad says, but it is a “nuanced” subject, and therefore, conversations and debates “can get emotional.”
The emotional nature tied to the political complexities in the Middle East are frequently viewed in this way — because Israelis and Palestinians alike are affected by the constant, sometimes fatal, ramifications of a country in war, conversations can become heated and argumentative.

Ahmad has not personally experienced this to a great extent while advocating on campus. Instead, he explained, the type of dialogue he has experienced so far has been mostly “positive.” “We’re not here to argue with people,” he explained.
But how does such a blatant display of passion and politics affect students of differing beliefs?

After my conversation with Ahmad, I walked to the “Israeli booth” several yards away, and had a conversation with ERC sophomore Sapir Levi, who leads the campus organization Tritons for Israel. She had a very different experience advocating for “Israel Solidarity” on campus.
She started our interview by proclaiming: “Israel is my home.” Very quickly, it became clear that Levi felt deeply uncomfortable during (what she referred to as) “Israel Solidarity Week.” “I see an injustice in how Israel is represented on campus and a strong obligation to advocate and communicate the Israeli narrative … [in order to] provide another side.”

I asked her if she felt that the Israeli narrative was the underrepresented one in media, to which she asserted with a strong “yes.” Notably, advocates from both booths felt this lack of representation — something that became clear not only through conversation, but also through the way both booths defined certain terms, such as “Zionism.”

“The conflict [in the Middle East] is more complicated [than a] victim-perpetrator [relationship],” Levi expressed, and thus, reflecting it as such made her feel misrepresented and misjudged. She shared one student’s story, explaining how one girl claimed that her “TA forced [the class] to go and look at [the pro-Palestinian] wall, and didn’t bring them over to the [Israeli booth].”’ The Israeli student who was a part of that class, in a moment of vulnerability, was heartbroken. “That is a clear bias,” one that was, to Levi, inappropriate in a classroom setting.

But what about campus climate? Levi said that she experienced and witnessed deeply personal reactions to this week. “I have talked to people who feel uncomfortable walking to class.” Like Ahmad, Levi agrees that the politics of the Middle East are complex, and she acknowledges that because of how personally students of both political views are affected, her “strategy for this week is: be empathetic.”
Every year, Tritons for Israel, in combination with any students who choose to join, walk through campus with Israeli flags in order to show solidarity. But this year, one major change has been set in place: They will not walk past the Palestinian booth or wall.

“Our intention isn’t to parade in front of [the pro-Palestinian activists],” it is to show “solidarity.” She explained that the goal was not to further the “divisive” narrative that to be “pro-Israel” was to be “anti-Palestinian.”
These peace-keeping efforts have also been undertaken by the organization Students Justice for Palestine, in renaming their activism from “Anti-Zionism Apartheid Week” to “Justice for Palestine,” a change that, to Professor Provence of Middle Eastern affairs at UCSD, “is probably less provocative than ‘Anti-Zionist Apartheid Week.’” Thurgood Marshall College sophomore Kol Chaiken was noticeably reading the displays on Library Walk when she noticed one stand-out feature on the informative booths on either side: “the use of the word “apartheid” and how both groups that were tabling this week wanted to define it… [it was] defined completely differently.”

When asked about the displays and methods for activism, Chaiken responded: “I don’t think [there should be] limitations [on activism] … I might have a different response if the tables were set up differently, [but] right now it’s set up the way it works for both [organizations] and for other students.”
According to Chaiken, the displays and events can make students uncomfortable: “I think a lot of my Jewish friends that wear kippahs’ and dress in a certain way that indicates [their religion] feel more [uncomfortable] … but on our campus, I don’t think there has been [any specific thing] that has made [students] fearful … just nervous.” When asked to clarify, Chaiken commented on the recent anti-Semitic and anti-Muslim actions on other UC campuses.

To gain more insight into the intricacies of this subject, and to hear another opinion on methods of student activism, I spoke to Professor Provence. Provence has experience living in both Syria and Lebanon, and while pursuing his Ph.D. in 1999, was part of a UN-organized group trip to the Golan Heights, accompanied by a commanding officer of the UN unit of disengagement peacekeeping force. Provence also lived in Syria and Lebanon during numerous historically significant landmarks for the Middle East — namely, the 2000 Camp David negotiations, between former U.S. President Bill Clinton, Israeli prime minister Ehud Barak, and Palestinian leader Yasser Arafat, and the 2000 Israeli withdrawal from South Lebanon. Additionally, Provence has visited “various parts of the countries [Syria and Lebanon] affected” by the ongoing conflict, including Palestinian refugee camps in those areas.

Provence spoke to me about student activism as it pertains to the Middle East. He asserted that “student activism is a long tradition … it’s part of the education students receive… to be politicized and involved in activist work.” Nonetheless, he noted, activism as it pertains to Middle Eastern affairs is rare in the U.S.; college campuses seem to be the most prevalent exception.

I asked Provence whether he believed that presenting strong biases as fact could be confusing or harmful to students who lack a knowledge about Middle Eastern politics or affairs, in engaging in dialogue. Could putting two core beliefs on display as fact suppress a growth mindset regarding political discourse?
Provence answered by stating that ultimately, “facts” such as the definition of the word “Zionist” or the concept of “an apartheid state” are not really facts: They are interpretations rooted in “ideological beliefs.” Sometimes, these interpretations are supported by historic bases, but ultimately, they pertain to subjects of such nuance, that propagating an opinion should not be confused with disseminating unbiased or objective information. “We have to challenge [students] to defend [their arguments] with facts and and accurate historical evidence,” instead of simply encouraging a defense of one “side,” Provence agreed.

When asked about the nature of “Justice for Palestine/Israel Solidarity” week as it pertains to campus climate, Provence was adamant that he did not believe that the university should set limitations on student activism or speech. “The university is not in the business of making people comfortable … in fact I would say that the role of the university is to make people uncomfortable … from time to time.”
Ideally, Provence believes that a free political climate should “challenge students to discuss” and debate as part of their method for activism. “There have been, over the years, student groups that have managed to successfully have these [contentious] kinds of discussions … I think [everybody] should take Middle Eastern history courses … but many won’t because [they] don’t want to be disturbed by the facts … or [hear] information [questioning the] national narratives beloved by either side.”

“That’s the kind of discomfort that we should encourage,” he concluded.