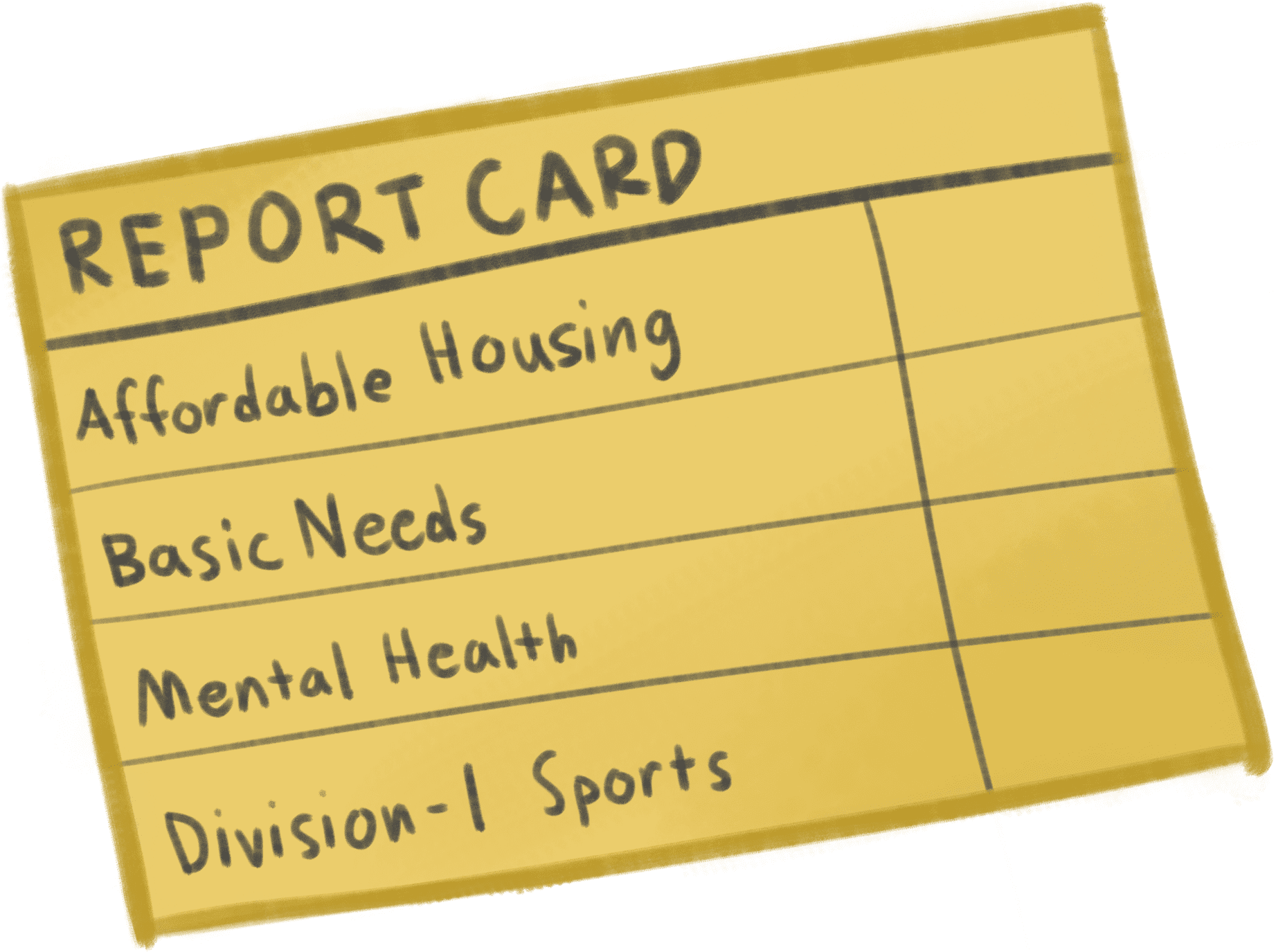 A.S. elections just finished a few weeks ago and the current A.S. Council is working hard on a smooth transition. Throughout the election season, candidates made plenty of campaign promises — promises they will have to keep next year. One of the candidates, Dennis Yeh, claimed “student needs promised by all slates for years are not getting accomplished.” Voter apathy slowly creeps up as many feel that while their vote counts, no results seem to materialize. I interviewed UC San Diego’s A.S. president and vice president of campus affairs to discuss the campaign promises they made last year and how well they had fulfilled them.

I met with UCSD A.S. President Daniel Juarez, a fifth year in Muir College, in her office on the fourth floor of Price Center. Entering a stuffy room with no windows, I sat on a cluttered couch, feeling claustrophobic. I noticed Juarez was on her computer reading the recently released report on the UC Office of the President audit and she was still a little sick, but she took a break to talk to me.

When Juarez ran for president last year on the Students Determined slate, one huge component of her campaign was improving basic needs and services on campus. Food was the most obvious of these basic needs. Passionately, she told me about the Triton Food Pantry, which had just finished reconstruction in February, and how she was taking the next logical expansion by acquiring funding for the creation of a basic needs resource center.

“The construction of the space where the basic needs center was something I had worked on since fall quarter,” Juarez told the UCSD Guardian. “By fall quarter we had been able to secure close to a hundred grand in funds. I was able to get money from the chancellor, [vice chancellor of student affairs], and University Centers is helping with some of the construction costs.”

The plan is for the new basic needs resource center to take over some of the programs Triton Food Pantry provided that were unrelated to directly providing food — for example, cooking demonstrations. Triton Food Pantry also implemented care packages as a service; Juarez explained that while it was not on a large scale, they were able to provide items such as deodorant, toilet paper, toothbrushes, hygiene and menstrual products.

She has also hired a basic needs coordinator. “[They are] on campus and already sign up students for CalFresh,” Juarez told me, referencing the food benefits program.

Another campaign talking point and continuation of the Juarez’s basic needs theme was reducing housing insecurity. She concedes fulfilling this promise had proved significantly harder than she had expected; her original plan had been to implement a version of UC San Francisco’s “cost of living supplement program.”

“UCSF doesn’t have enough housing to cover their students and SF is ridiculously expensive,” Juarez explained. “Right now, they’re building more housing and while they’re doing that, they built this program to subsidize off campus housing.”

Despite working with the financial aid office and other entities on campus, Juarez dropped this specific implementation of creating affordable off-campus housing for one simple reason.

“It ended up being really costly,” she said dejectedly. “UCSF has a graduate population only; they don’t have the size of us. How could we support that for students?”

However, it’s not all failure when it comes to fixing housing insecurity. Since her affordable housing plan didn’t pan out, Juarez pivoted to focus on temporary and emergency housing. When I asked what that was, she explained what it meant to be house insecure.

“That can be among many things; it doesn’t just mean money. You could be in a house that’s compromised, or it’s not a safe space because there’s a problem with your roommates. We also see issues of domestic violence.”

Working with the deans of student affairs (“especially Patty,” Juarez noted, referencing Muir College’s dean of student affairs Patricia Mahaffey), Juarez pushed for the creation of programs to provide temporary housing for those who are house insecure by utilizing extra rooms on campus. Though the system is not formalized, Juarez is far more satisfied with the work she had done on temporary housing than affordable housing.

“[Affordable housing was] my mistake,” she said regretfully. “Had I realized [mimicking UCSF’s program] wasn’t going to work, there would have been more time to work on other areas.”

The next week, I had a chat with Sabrina Ekdahl at Price Center Starbucks. It’s a sunny day, and we sit outside in the fresh air as students bustle around on their way to class. UCSD’s A.S. vice president of campus affairs is a senior in Eleanor Roosevelt College. What exactly does she do?

“Vice president of campus affairs is an interesting position where as of now, our standing rules are not very clear on what the position entails,” she told me. “[I had been] trying to decide if it’s more of a supervisor position who just wants to oversee all of council or a position that’s going to be more active. The role that I took was more of a supervisor.”

I asked her if she remembered the campaign promises she and her slate, Tritons United, ran on the previous year. She laughed hesitantly and I raised my eyebrow for her to continue.

“Well, I don’t like to be associated with the …” She paused. “Elections are interesting in that when they’re going on, you’re really involved in them and it’s ‘my slate till I die.’ Once you get into A.S. [Council], you realize there’s so much more and there’s the bigger picture.”

For her campaign, Ekdahl ran on themes that occasionally overlapped with Juarez’s. One of these intersecting pledges was improving mental health services for students by working with Counseling and Psychological Services.

“Each answer is going to be kind of repetitive,” she warned me. “It wasn’t something we did just this year. I can’t sit here and take credit for it. I’m just continuing on the work my predecessors have done.”

Referencing the Tritons Flourish program within CAPS, Ekdahl described the current state of improving mental health services as “very initial, still collecting data.” Both Juarez and Ekdahl said while hiring for CAPS had accelerated (Juarez explains that after hiring a few new counselors this year, CAPS is only five counselors short of the optimal ratio of “one counselor per thousand students”), large steps for campus mental health could only be part of their long-term visions.

I pried for specific policies or projects on the mental health efforts from Ekdahl, but didn’t get any.

“Personally, I would say I haven’t [implemented specific policies], unfortunately,” she said. “But like I said, the way I took this position this year was more of a supervisor.”

A huge proponent of Division-I sports, Ekdahl was very excited when the Division-I referendum passed last year. Part of her campaign promises was a call for more school spirit and a strong push towards Division-I sports. Here, she was more successful; Ekdahl worked with the Athletics Department to create a spirit summit that brought together leadership from various spirit groups at UCSD.

“Greeks on campus, A.S. college council, athletics, the cheer team, the dance team, the pep band,” she said, “We met regularly to discuss what we were going to do and promote a better campus climate and push for Division-I.”

However, UCSD was denied membership to the Big West Conference on April 6. She explained that students from the leadership committee are working with the vice chancellor of external affairs, who will work with those at other universities to rally support for UCSD to get a bid by 2018, the deadline for the university to enter Division-I before the student vote becomes void.

Finally, I asked Ekdahl about an incredibly specific promise she had made during her campaign in 2016: improving lighting in Gliderport. She had cited inadequate lighting in the area as a campus safety issue. I jokingly asked if Gliderport ever “got lit.”

“No, not in a year, no. There’s beach permits involved, contracts … We don’t technically own that space.”

However, she clarified that lighting in other areas on campus have been improving. Ekdahl has gone on lighting walks with a group at the Sexual Assault Resource Center to mark dark areas.

“They recently updated the lights in Warren Field over here, so if you walk around at night, these are white lights,” she said, pointing in that direction.

Other areas on campus still currently utilize dimmer, yellow lights. The goal is to update the lights all around campus so that darker areas are more brightly lit. Furthermore, new Sixth College will incorporate these new lights.

Both Juarez and Ekdahl spent time telling me the A.S. Council standing rules were finally being modified, and both seemed legitimately excited about this fact. The A.S. standing rules detail how A.S. Council operates but is a long and over-complicated document; Juarez explained that every year, people want them to be changed but the result is always half-baked. This year, they’re working on changing the rules legitimately.

“We want to find ways to keep our members accountable, because AVPs don’t have a direct set of responsibilities,” Juarez said. “[Changing the standing rules] will help with accountability and making people say, ‘okay I need to produce this amount of work or whatnot.’”

Ekdahl has the same issues with the standing rules. “[The standing rules] needed be to cleared out and changed before any work can productively be done.” In fact, Ekdahl felt like there were no records or documentation about her VP of campus affairs position, making her job difficult to do.

“I focused my time and energy this year on creating a foundation for my position so that my successors can then do that advocacy work and talk to administrators and not have to worry about the groundwork.”

As we wrapped up, Ekdahl gave me a bit of insight into the difficulty of keeping campaign promises and a quick flashback to her campaign the previous year.

It’s true that issues on campus don’t fix themselves automatically. Neither of these jobs are particularly easy, and even when promises are followed through, many students at UCSD either don’t realize or don’t care. But students have also come to expect stagnation, and this expectation is reflected in low voter turnout for A.S. elections. Perhaps in the years to come, progress will face fewer roadblocks as the standing rules are revised.