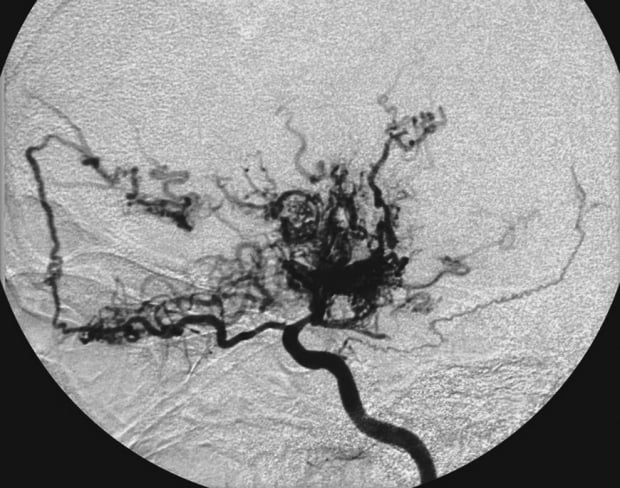 Moyamoya disease is a rare and progressive cerebrovascular disorder caused by artery blockage in the basal ganglia at the base of the brain. The Japanese research team that first identified the disease named it “moyamoya,” meaning “puff of smoke,” due to the appearance of the small tangled vessels that form to circumvent the blockage in an angiogram. Moyamoya is seen at a higher rate in Asian countries than in America or Europe and is seen more in children than adults, as well as more commonly in females than males. About one in 10 affected by Moyamoya disease has a close relative who is also affected. The exact causes are still not fully known because there are very few cases and information on the progression is limited. Experts believe the disorder can be triggered in many ways, including by trauma and genetic abnormalities.

The disease begins its progression when the carotid arteries leading to the brain thicken and narrow. When the carotid arteries cannot function properly, blood flow slows down to a dangerous speed where clots are likely to form. This increases the risk of a transient ischemic attack, also known as a “mini stroke” or a full stroke. The brain will begin to form new pathways around the blockage to increase blood flow with small blood vessels through the affected area. As the disease becomes more severe over time, surgery is needed to restore proper blood flow and reduce the chances of the patient having a stroke.

Symptoms in children are similar to those of a stroke, such as weakness on one side of the body, blurry vision, slurred speech, seizures and headaches. These symptoms can develop in one of two ways — slowly with gradual subsidence or suddenly with no decline. In rare occurrences, a child with Moyamoya can have a brain hemorrhage, but this symptom is more common in adults. Warning signs of a brain bleed include vomiting, nausea, changes in vision, lethargy, body numbness, loss of coordination and headaches. Moyamoya disease is diagnosed through medical tests such as MRIs, MRAs and CT scans. The standard test for diagnostics and surgery planning is a cerebral angiogram, which is a minimally invasive procedure with contrast dye injected into the body to show the position of the vessel tangles as well as the extent of the affected carotid arteries.

There are medications physicians will prescribe to affected patients for symptom management. Anti-clotting medications, such as aspirin, are important in reducing the risk of stroke. Calcium-channel blockers prevent calcium from moving into the heart and elevating blood pressure, which can alleviate headaches and TIAs. However, the only long-term treatment for Moyamoya disease is undergoing a surgical procedure to correct blood flow to the brain. There are some indirect surgical procedures that introduce new blood vessel growth over time, such as encephaloduroarteriosynangiosis, encephalomyosynangiosis, omental transfer, dural inversion and direct arterial bypass. Direct revascularization surgeries are also an option, but take more time to perform and usually have more complications than the indirect. There are clinical trials being performed around the world to develop more understanding the disease and to find other possible treatments.

One thought on “Disease of the Week: Moyamoya”