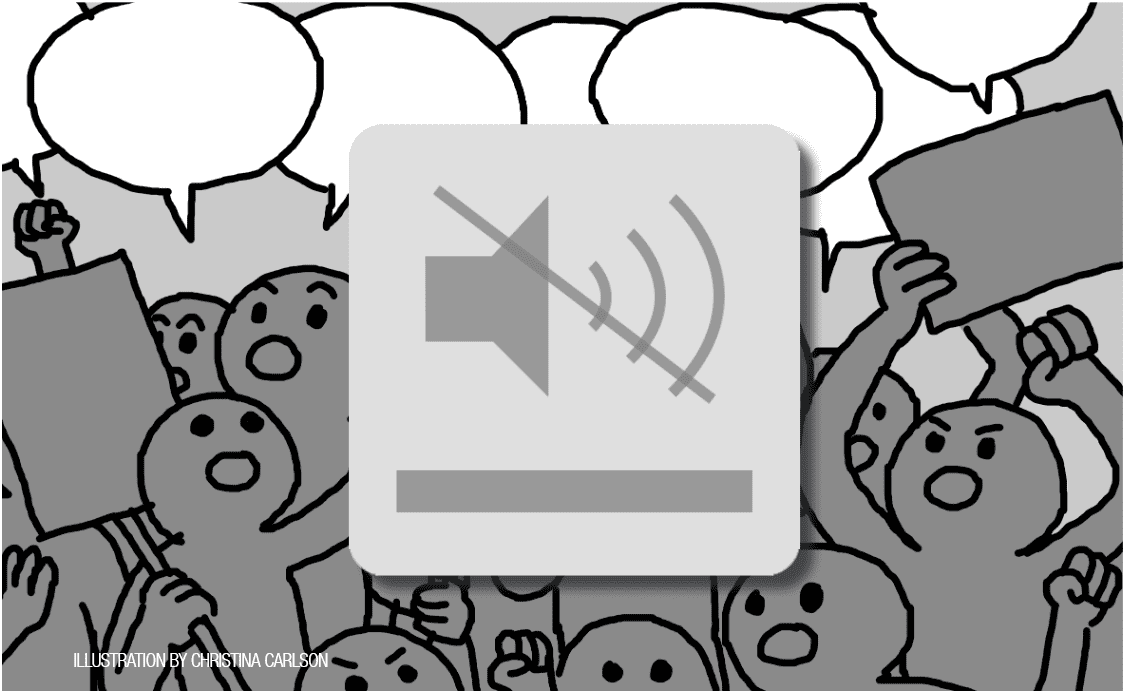 As the new Trump administration has moved toward implementing policy, many lobbying groups have started to push their influence onto the White House. One of them is the Goldwater Institute, a libertarian think-tank, with strong ties to extremely right-wing donors and organizations. In response to the Milo Yiannopoulos’s disinvitation to speak at UC Berkeley, the Goldwater Institute published model legislation encouraging the Trump Administration to require that institutions remove their “free speech zones” and speech codes alongside prohibiting college and universities from disinviting controversial speakers. The model bill also requires institutions to discipline students who interfere with the free speech of others on campus, citing protesters who interrupt speakers.

In 2016, 43 speakers have been met with large protests and opposition when attempting to speak on a college campus, as compiled by the Foundation for Individual Rights in Education. Of those 43 speakers, 35 were opposed by left-leaning activists while only five were opposed by right-leaning activists. The remaining three speakers were opposed for non-partisan or split issues. As a conservative lobbying group, the Goldwater Institute, therefore, has a concern that its viewpoints are not being adequately heard on college campuses. However, their concerns that free speech is hindered at the administrative level are misleading, as it was not the administration that cancelled the speakers, but rather the security teams or the student organizations that originally invited the speaker. The administration had no say in the decision to disinvite Milo Yiannopoulos.

The problem with the Goldwater Institute’s methods of promoting new “free speech” legislation is their premise that the protests happening across college campuses are attacks on hosting controversial right-wing speakers and, more broadly, on free speech. In reality, the protests are exercises of the First Amendment. When UCSD students gathered at the Silent Tree and marched to Galbraith Hall in a demonstration against the Muslim Ban the Monday after President Trump issued an executive order temporarily preventing citizens from seven majority-Muslim countries and refugees from entering the country, they were peacefully assembling. When campuses erupted in protests the night of the election after President Trump was declared the winner, they were peacefully assembling. And until a local group of non-students hijacked the demonstration at UC Berkeley and caused mayhem, the students at Yiannopoulos’s event were peacefully assembling. The Goldwater Institute suggests that the actions of students — some even non-university-affiliated, as at Berkeley — practicing their First Amendment Rights were the fault of college administrators. At Davis, for example, it was the chancellor who defended Yiannopolous’s right to speak at the university amid student protests prior to the event. At UCLA, it was the College Republicans who disinvited him from the event, not a member of administration.

The new codes and regulation that the Goldwater Institute is advocating for should not be taken lightly. Lobbying groups have a trail of laws and legislative victories proving their success. At the end of the 19th century, the American Medical Association convinced legislators to constrict access to abortion, and in some cases criminalize the practice, in order to curtain the popularity of midwives and monopolize health care in general. In the early 1900s, the Immigration Restriction League, a group founded in response to the influx of immigrants, played an influential role in the passing of the Immigration Acts of 1921 and 1924, which established national origin quotas intending to limit the flow of migration from Southern and Eastern Europe, by portraying such immigrants as low-skilled, uneducated and criminals. More recently, in 2012, Big Tobacco managed to defeat Proposition 29 on the California ballot that would have increased the tax on cigarette by $1 and donated all the additional revenue to cancer research. With a Republican Congress, president and many state legislatures, the Goldwater Institute has a real chance of influencing changes to the way the rights guaranteed by the First Amendment are enacted on college campuses. Already, there have been several bills introduced across several states designed to limit the ability of protesters and curb the power of the First Amendment.

Unfortunately, the current administration is listening: Trump himself tweeted that he would like to see Berkeley lose federal funds for the cancellation of Yiannopolous at the campus. This sentiment — one legitimized by the office of the president, on a public platform — is misleading in its scapegoating of the University of California and dangerous in this respect.