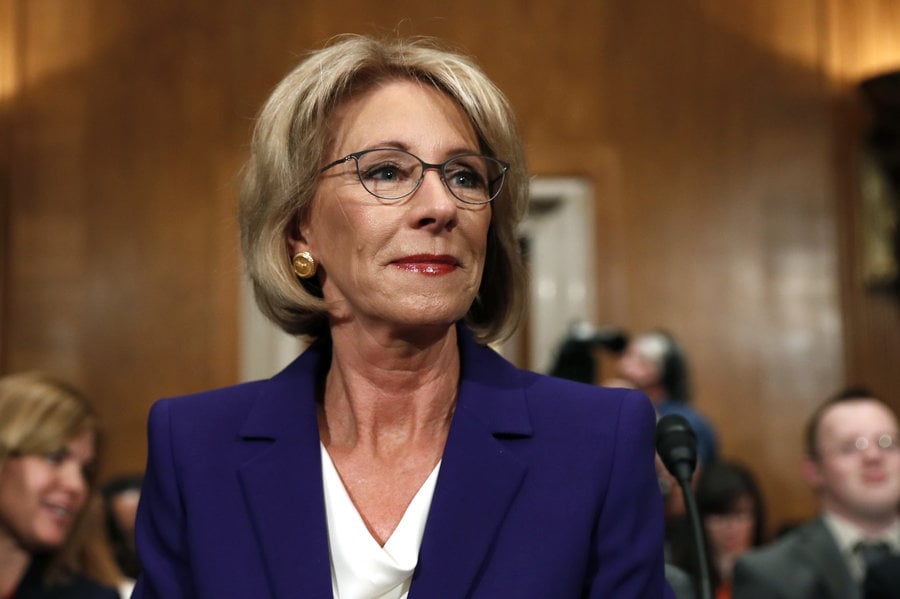 On February 7, Mike Pence cast his tie-breaking vote confirming Betsy DeVos, an appointee by President Trump, as secretary of education. Prior to the appointment, DeVos served as a prominent proponent of a notorious, loosely-regulated Detroit charter school system, as well as of voucher programs. After the appointment, she showed her incompetence by failing to answer basic questions about educational policies in the Senate confirmation hearings. Her appointment incited protests in public schools and provoked many of her opponents to predict the disastrous results during the her time of service. Although her appointment is unlikely to bring any improvements into the nation’s school system, the ultimate destruction of public schools is unlikely to happen. Ironically, since the office of the secretary of education has little power and DeVos is too unqualified to bring any meaningful changes, her appointment, in lieu of a more capable candidate, might allow schools to survive during the tough period of the Trump administration and might even help Democrats to get re-elected in the future.

DeVos will not be able to do much since she had low political capital from the start and spent much of that capital on being confirmed. Detroit Free Press and other newspapers favoring public schools were driving public attention to the fact that her money and efforts are being spent on Detroit’s charter school system, one of the worst educational systems of the nation, which consistently shows low results and ineffective spending decisions. They also highlighted her ties to reformatory Christian organizations. Beyond this, the fact that she has never had any experience in the public school system, has never been an educator and has never worked closely with school curricula further diminish her political capital.

The most disastrous event for her authority was the Senate hearing, where she failed to answer such basic questions such as the one asked by Sen. Al Franken, which sought her opinion on proficiency versus growth tests. Proficiency tests are tests that measure the results of the students in comparison to other students’ results, while growth tests measure the progress the students make in comparison to their own previous results. The debate over which one is better is among the hottest education topics of the past three years and led to the replacement of the No Child Left Behind Act with the Every Student Succeeds Act in 2015. DeVos was so unfamiliar with the topic that she failed to understand the question. This and other unanswered or ridiculously-answered questions effectively undermined her authority among not only educators, future co-workers and anti-voucher democrats, but even among republicans who initially supported her.

Two Republican senators — Lisa Murkowski of Alaska and Susan Collins of Maine — refused to support the Republican Party appointee and proclaimed her as unqualified, further challenging the influence she will be able to exercise as the secretary of education.

If Trump were to choose a more popular and qualified candidate for the position, he would be much more effective in implementing his agenda. However, he was unable to choose such an appointee, and his present pick will not be an aid in putting his ideas into fruition.

More fundamentally, even though DeVos seems to be in an important position on federal level, her office itself does not give her much power in shaping public education.

Because of the 10th Amendment to the Constitution, the major role in creating educational policies is given to states and districts. This supreme role of local governments was further emphasized in the Every Student Succeeds Act and was later reaffirmed by DeVos herself. Furthermore, in the highly decentralized U.S. Department of Education, the system of checks and balances works very well. The actual functions of the secretary of education entail advising to the president or, in practice, transmitting the president’s position, along with many technical duties, such as coordinations of department activities. In other words, the secretary of education does not actually decide on or implement the policies — these are the prerogatives of the deputy secretary for elementary and middle school and the under secretary for high school and postsecondary education. DeVos lacks the ability to implement a federal voucher program since it is already the realm of Congress to implement federal programs. Instead, the secretary of education is a public and technical position. Unless the secretary has the personal charisma and authority within a department — which DeVos does not — the secretary does not have any real power.

DeVos is nothing more than an irksome parasite and her appointment might ironically help to protect schools from Trump’s destructive idea. However, even though her ultimate ineffectiveness and lack of power should give us hope, it is not yet time to relax. As a public figure, DeVos might have influence on Congress and local educational leaders. Therefore we should unite together to prevent her from destroying our public school system, and help children of color, those with disabilities, and all other underrepresented minorities of students to endure through this tough period in order to succeed academically.