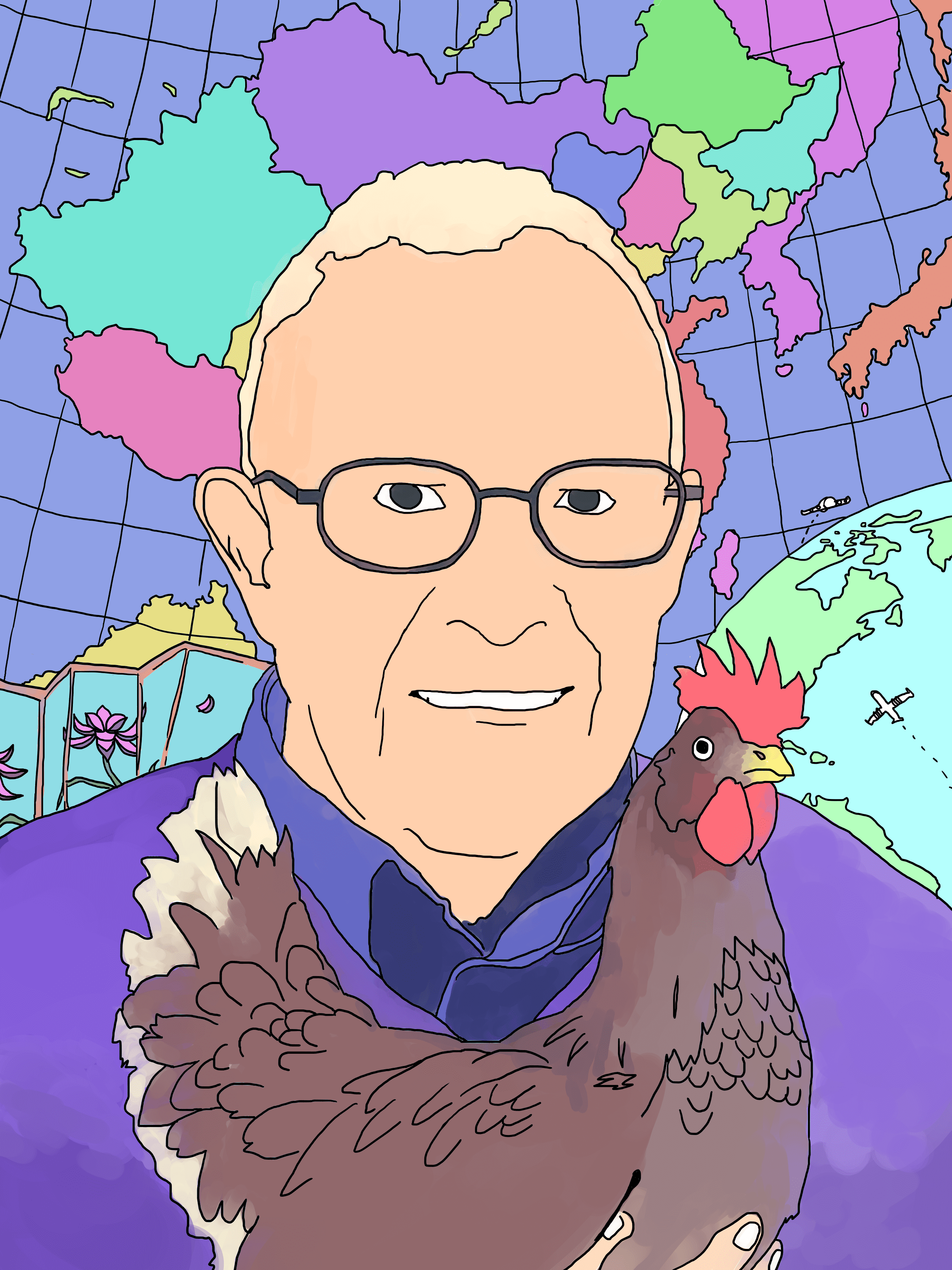 Out of the hundreds of students in his lecture at a small Western Massachusetts college, Paul Pickowicz sat toward the back. He was a quiet student, barely noticeable among the bustling crowds that would swell in and out of the room — he barely wanted to be there to begin with. Time spent in classrooms and with the endless piles of reading was time that was taken away from tossing a ball around under clear blue skies.

Yet, there was something about the way the professors talked — so full of authority and rich with knowledge — that inspired Pickowicz from the back of the class. Eventually, Pickowicz gave up his dreams of becoming a star athlete; there were always those who did better than him, who were more athletic than he was. But the inspiration that his professors gave him from the front of the classroom became a part of his very being–so much so that one day he would point to them and say, “I want to be like you.”

Pickowicz began his life and career as the underdog. He came from an immigrant family; his mother’s family escaped from the Irish Potato Famine, and his father’s family came from Ukraine on the eve of World War I. Of his parents and four siblings, Pickowicz was the first and only one to graduate with a college degree.

“I didn’t get any advice from my parents, they just didn’t know what to tell me … I never visited any of the schools … but I ended up going to a small college in Western Massachusetts. I did my B.A. degree there, and I thought I was going to be a star athlete there, but it didn’t work out,” he said with a small chuckle.

Thus it was in the classrooms of that small college — rather than out on the fields — that Pickowicz began his life’s work. Toward the end of his sophomore year in college, Pickowicz had the opportunity to go on a trip to Europe with his American history professor for a year, an event that he refers to as the “luckiest thing that happened to him at the time.”

“I had never been out of New England my whole life … He wanted to take everybody to Scotland and, to me, it might as well have been the moon. It was just, wow, I got really excited. And, you know, my parents couldn’t really understand … but it changed my whole life. To this day. To this day, the impact of that, I cannot stop traveling … I wanted to see every country in the world.”

Going on the trip, Pickowicz felt as if his eyes were opened to the world. Travel exposed him not only to other cultures and peoples, but also to books and learning. Paul found himself in an age of discovery, one that eventually led to his interest in China. It was 1966 and the topic of every newspaper and radio broadcast was the Cultural Revolution (the movement that purged all capitalist elements and promoted Communism) in China. China was the center of the world’s attention yet, like North Korea today — completely shadowed in secrecy. This only spurred his interest further.

“I started picking books in the bookstore and reading about China. I just couldn’t get enough! The more I read, the more I wanted to read. And when I got back to my own campus in senior year, that was it. I just had to take every class I could take on Asia … I couldn’t get enough. And I decided that this is what I wanted to do with my life. I wanted to be a professor like the people who inspired me.”

Pickowicz went on to get his masters degree at Tufts University and his Ph.D. from the University of Wisconsin, where he worked on his dissertation, which focused on Chinese Communist leader Qu Qiubai. Research for his dissertation led him to travel all over Asia, beginning in Japan, then to Taiwan and then for a full year to Hong Kong. However, information on the subject of his dissertation, China, could still only be found in books. Pickowicz wouldn’t give up. He gathered a group of graduate students all yearning to see the untouched country and put together a letter to the Chinese government asking for access into their country. To their great surprise, the Chinese government consented. In 1971, Pickowicz became part of the first American student delegation to visit China.

“Even though it was a carefully guided trip and you were just taken into these model units … you got enough taste of being on location, of having your feet on the ground, talking to people… It generated this hope that maybe someday in the future it’ll be possible to do grassroots historical studies [in China].”

Still, it wasn’t until 1978 that Pickowicz was able to make a real breakthrough in his studies. With the close of the Cultural Revolution and Mao’s death came the idea of opening up China to the outside world. It was a time when letting the truth come out was not viewed negatively but instead positively. Seizing the opportunity, Pickowicz put forth a proposal to do some field research in an outlying village. For the second time, Pickowicz was the very first to receive a “go-ahead” from the Chinese government for his project.

“It wasn’t easy … but it was very exciting,” he said with a small laugh. “We went to a village. They didn’t have any running water, … electricity [and] there was no way to take a shower! But this is the way everybody lived, so what was the big deal? … But you felt great because you were there! … But because this hadn’t been done before, people were very careful about what they told you. But you keep on going back and they get to know your personality … and sometimes I would interview people over a period of 10 years. The more that people got to know you, the more they knew about what you were doing, and the more they liked what you were doing.”

Fast forward 20 years and Pickowicz wrote two books on this one village and its history. One of his books, “Chinese Village, Socialist State,” was awarded the Joseph R. Levenson Prize of the Association for Asian Studies in 1993 and became immensely popular among the rural society of China.

Alongside this project, Paul worked on a separate project — one completely different from the realistic scenes of village life. It involved the world of fiction — the world of film. In 1982, Pickowicz got a grant from the Chinese government and, in another first, gained access to film archive of China. Slowly, he was able to collect his own archive of videos, which he used to set up a class here at UC San Diego. Being a professor here, Pickowicz wanted to use this class to encourage students to probe cultural and social history.

“More than 20 years ago, I said to myself, ‘I want to teach a class on early-era Chinese film.’ Nobody knows anything about it. You know, early Chinese film was great but nobody knows about it! … [They] were great precisely because they dealt head on with all the gut wrenching social, political, economic and cultural traumas people were going through at that time. For better or worse, China at that time was confronted by the powerful currents of a very complicated global modernity … I kept telling the Chinese authorities, ‘You’re so restrictive on film access. It’s a great pity because people should know how interesting the early film industry was.’ So I started teaching this class. And it got a big response.”

This class was revolutionary. Because of the lack of knowledge on the subject, broke ground and gained a huge response from the student body. In fact, it garnered so much attention that Pickowicz got invitations from schools around the world — as far away as Germany, Scotland and China — to teach it. However, knowledge of Chinese film is not the only thing that Pickowicz wished to impart upon his students.

“The lasting influence that we [as professors] want to have on people is to have respect for all of the conditions that exist all around the world. You know, be a little bit modest. Be a little bit humble. Don’t assume you know everything and that everyone else doesn’t … We have differences, but don’t forget what we all share in common. You can connect to people, you can understand people better if your mind is open. That’s the bottom line — keep your mind open.”
Several years have passed since Pickowicz last sat in the back of a lecture hall — he can no longer maintain the “low-profile” status within the classroom that he once held. In his journey of 30-something steps from the back to the front of the lecture hall he has opened his eyes to the world around him and found a new appreciation for people’s differences. Paul Pickowicz: news junkie, travel bug and explorer is not the same as he once was. But maybe that’s okay.