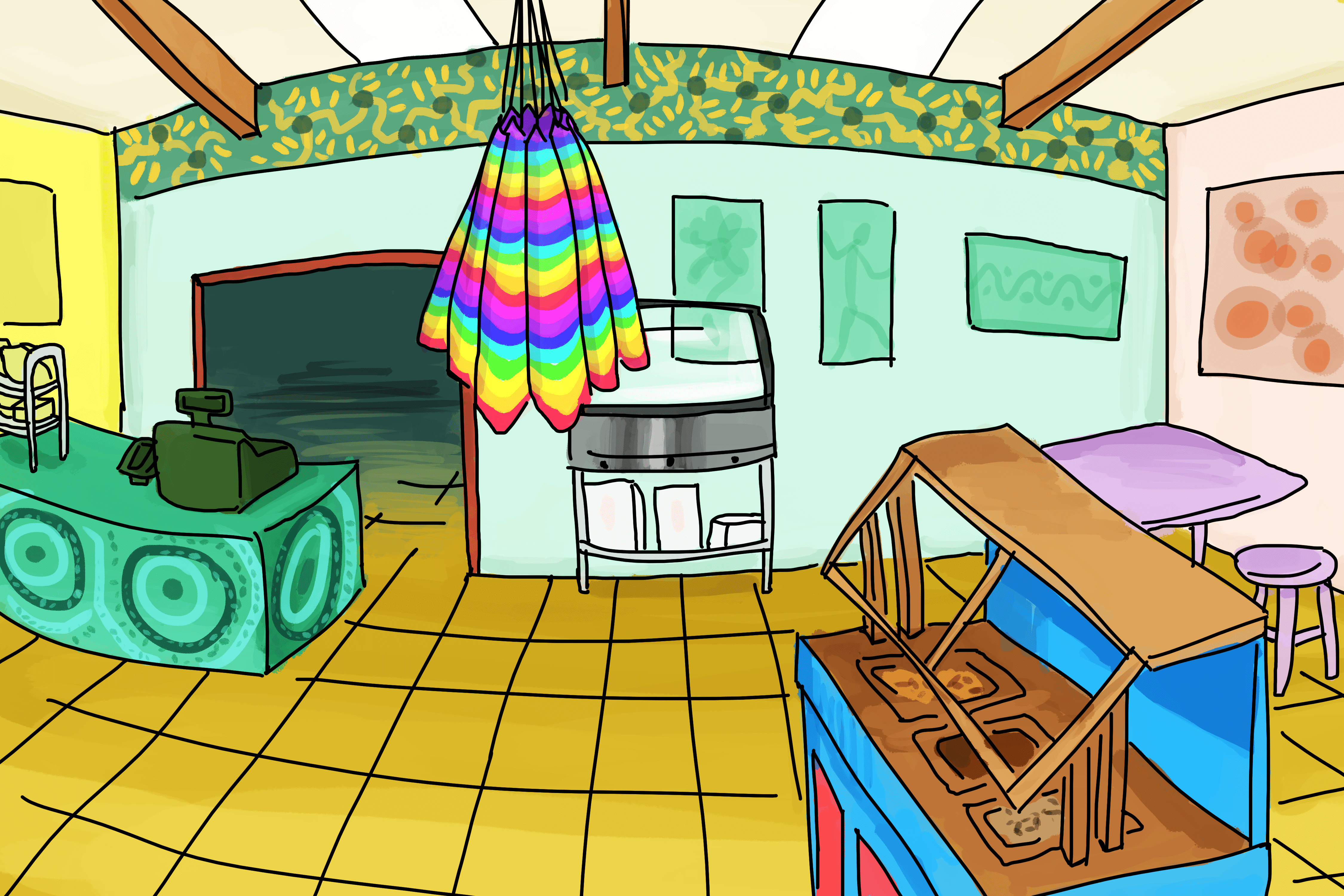 The newest members of UCSD’s student body are no doubt fascinated by the expansive gym and sports fields around RIMAC, the innovative architecture that makes up Earl Warren College’s engineering buildings and the colorful appearances of Rady School of Management and the Village. But one place often overlooked while admiring UCSD’s sprawling campus is the Old Student Center, which contains many hidden gems, such as the Food Co-op.

Located next to the G-store and opposite Groundworks Bookstore, it is often overlooked as just another point on the map on the way to class. However, not so long ago the Student Center held a thriving community of united co-ops that everyone knew about and was proud of. The rejuvenation of that community feel and the revival of this small but valuable institution is what David Morales, proud alumnus of UCSD and the co-ops, hopes to achieve starting in 2017.

As you enter the food co-op, it does not disappoint; each wall is painted a different color, with bike wheel replicas and other fanciful decorations hanging from the ceiling. Purple tables and colorful paintings line the walls, and the room is covered with fridges, leading to a small kitchen in the back. Overall, the co-op presents a friendly and welcoming ambience. The day I visited, it was bustling with volunteers for the mock tuna workshop, one of the events put on to promote the Food Co-op.

With prices lower than anywhere else on campus and even the option of free food with weekly coupons, it is a great but unfortunately unknown asset to students. The Food Co-op serves as one of the few vegetarian/vegan dining options on campus. Completely student-funded, it runs on the profits from the goods sold and supported with additional donations from alumni and occasional auctions and fundraising events like concerts. The UCSD Guardian spoke to Morales, who has faithfully volunteered with the co-ops since he started college in 1987, even meeting his wife of 23 years in doing so.

An avid supporter of veganism, Morales gushed about the importance of having healthier options on campus, as he explains the process of making gluten and dairy-free mock tuna rolls to the volunteers.

“You eat just a little, and it fills you up. There is so much energy that raw food gives you. The recipes are much easier than they look, it’s inexpensive, and you see the justice behind [being vegan],” said Morales. This partially inspired his initial interest in joining the co-ops back in 1987. “The space was very amenable to my evolving interests at the time: I was becoming a vegetarian, I was concerned with food and environmental justice, and [liked] the idea of working with peers in a place where we were all going to take responsibility for the work and business here,” Morales explained.

In fact, the vegetarian aspect has attracted a lot of the volunteers to the Food Co-op, and it continues to attract even more. “I hope to get the immediate interest of people who’ve been in the Food Co-op but have never been actual participants in the work here. Now they’ll get actual hands-on experience with making products none of them have made before. There are various members of the vegetarian club here, members of the other co-ops and existing Food Co-op members, and the synthesis of all that is going to be a renewed interest in developing the Food Co-op.” said Morales.

Things at UCSD have definitely changed however, like the increasing breadth of options available in terms of food on campus, and the places in the Old Student Center have understandably suffered because of that.

Read also: The Cause for Co-ops || Thomas Finn

“It’s a matter of diversifying it because these days compared to when I came here, you have so much more, so many other options on campus that didn’t exist back when the co-ops were strong — it’s about developing something people can’t get anywhere else and that will actually satisfy them,” explained Morales. “It may take a modification of say, product development. For example, Groundworks is a bookstore: Now people get everything on Amazon, so it’s a matter of how that situates in an academic environment and university campus.”

In fact, a recent development with all the co-ops is an evolving relationship with Rady School of Management, which aims to strengthen accounting practices and business organization at these non-profit, student-run enterprises, while providing students minoring in business with internship opportunities.

In spite of this, the Food Co-op’s popularity has continued to decline significantly, sadly resulting in it closing temporarily last week. A lack of volunteers has played a major part in this. Recently, the Food Co-op has been in transition, negotiating a new lease, as well as being handed over to new management. Many, including the volunteers at the mock tuna event, believe that the administration at UCSD isn’t helping as much as it should.

“I heard that recently they’ve been lacking in membership, that’s probably why I decided to get involved and yeah, I am definitely considering [being a regular volunteer here],” Tiffany Phan, a sophomore from Revelle College, told the Guardian. “It’s not really promoted by the university, so it’s very much turned out a student-driven space as opposed to a university-endorsed space. I feel like it should definitely be promoted by the university and maybe I guess de-stigmatized.”

The lack of support from the administration is not a completely new problem.

“These places in the ‘90s had a protracted struggle with the administration, and basically [made] a compromise between the co-ops and [them], with the co-ops, which were were very strong financially, being able to function with a relative degree of autonomy and at the same time, being subject to the basic university standards,” said Morales. “And yet, in order to be able to do that, the co-ops have to be able to function as non-profit student organizations, which are cooperatively run as businesses. They can’t be treated as standard commercial vendors, which is what the university seemingly wants to do right now.”

Morales additionally believes that the changing times and mindsets of students also serve as problem to the existence of the Food Co-op, with the pressure of academic rigor taking a toll on important extracurricular activities that students should take time to learn from. “At that period of time [1980s-90s], the university was much cheaper than it is now, so it was quite conceivable for people to be here for five years, whereas now, what I feel we’re battling is this tendency to want to get out sooner than later. So the turnover and keeping the knowledge consistent [with the people] at these co-ops is more challenging than it’s ever been,” Morales said.

However, the Food Co-op is more than just a health-conscious grocery store. It also aids in teaching volunteers the importance of team building and learning to make their own decisions, and it helped Morales with exactly that during his time at UCSD.

“The student co-op movement consists of very unique businesses, and they need to continue to exist as such to provide the kind of educational and experiential (work experience) that they traditionally have, and that they stand well to do in the future,” explained Morales. “Everything [else] is a highly corporatized culture which doesn’t give student employees the amount of decision making, agency or power that you have at the coops. With that comes responsibility, and that responsibility, in my view, is sometimes the hardest thing for the current students to grapple with. But I think the potential is totally there and of course some people totally have it.”

This sentiment is strongly echoed by the co-op volunteers. “This is an education space; it’s a place to learn, like cooking skills, managing a cooperative business, it’s really a community of shared labor,” Luka Vallino, a freshman from Revelle College and food co-op volunteer, told the Guardian. “Each co-op is part of a larger dynamic. We’re here to build kind of a collective individual space together, and we don’t have a hierarchal boss structure here, we’re self-organized.”

Vallino was actually a Groundworks member originally but has been instrumental in adding more active volunteers to the food co-op, which shows the mutual aid and community feel that all the UCSD co-ops enjoy together.

These values and benefits are a few of the many reasons why the Food Co-op’s volunteers and patrons hope it can reopen and continue to offer students what it has been offering for decades. Looking back at old photos from his college years from helping out at the co-ops, Morales spoke with tears in his eyes of his fond memories of his time at UCSD over the years, volunteering for the co-ops and making meaningful experiences as well as lasting relationships. His hopes for the future of the food co-op serve as inspiration to the current and future members of UCSD.

Edit 2/16/2017: Original version implied that that the Food Co-op was closing indefinitely. This has since been corrected to show that the Co-op was only temporarily inactive.