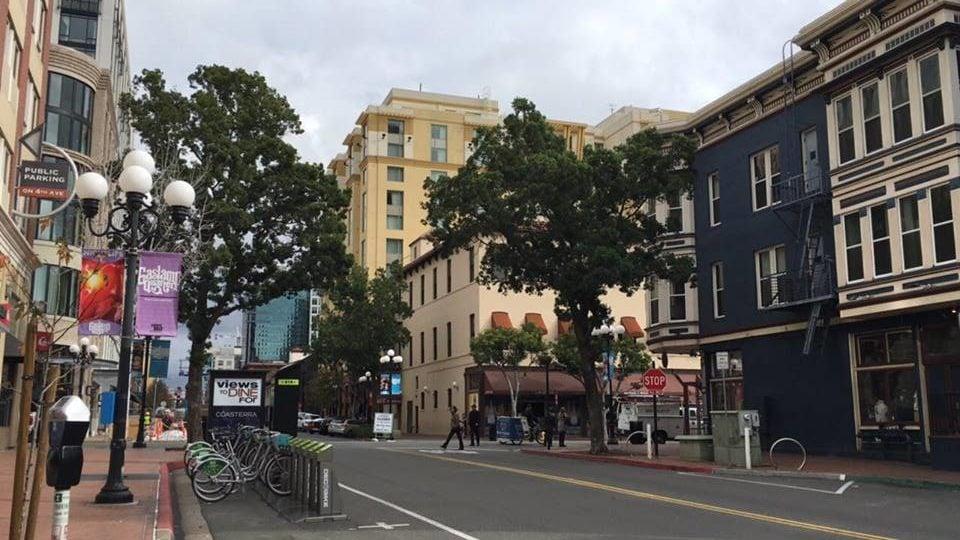 San Diego has more to offer than UCSD and the Trader Joe’s on La Jolla Village Drive. So before the quarter get’s wild, make a round about town to savor what this city has to offer. From the hipster scene in North Park to Socal vibes in PB, culturally diverse City Heights to iconically upscale Gaslamp, there’s much to see, do and eat in San Diego.

Known to be the college student’s haven for cheap beer and cheaper tacos, Pacific Beach (more colloquially known as “PB”) is the epicenter of coastal recreation and Southern California stereotypes. Parking may be a nightmare, but the sand and surf are a dream.

Historically, PB remained relatively rural, with only spots of suburbia dotting the ever-doubtful and relatively vulnerable coastline. Prior to becoming a hotspot for tourists and natives, PB was just another stretch of land bordered by the I-5 and, fittingly, the Pacific Ocean. But with post-war land value on the rise and a new wave trend rooted in rest and relaxation, development boomed and Crystal Pier was reimagined to accommodate the new bourgeois. The boardwalk would bring commerce, capitalizing on Mother Nature’s sandy beaches and blue waters. PB became to San Diego what Santa Monica is to Los Angeles.

Now, Taco Tuesday and Happy Hour dominate the cuisine scene, surfers and sunbathers occupy the shores and beach cottages, and quaint boutiques dot the boardwalk. Gaining acclaim as the ultimate tourist hub, PB has made its mark in San Diego. So grab a bike or board and make sure to visit this San Diegan spot that looks nothing short of a “Welcome to California” postcard.

Walking under the gaudy, green and orange archway of the Gaslamp Quarter, one feels like they’re going back in time. Past meets present with trendy restaurants, bars and clubs housed in Victorian-esque buildings. Tall, unique lampposts were added to evoke the feeling of old gas lamps, the namesake of the district, marking the 16 blocks. The streets are an eclectic combination of brick and glass, cobblestone streets and neon lights, arched windows and lively chatter, and have become a place where all kinds of people work and play.

“Historic Heart of San Diego,” the byline of the entrance sign proudly reads. The district began in 1850 when William Heath Davis attempted to create a city on San Diego’s beautiful waterfront. While Davis failed, Alonzo Horton, also attracted to the waterfront, had the same idea nearly 20 years later, and his plans to build a new downtown succeeded. Commerce blossomed, but the once-promising neighborhood eventually attracted prostitutes and gamblers, and the area came to be known fittingly as the Stingaree after the vicious stingrays in the San Diego Bay. The Gaslamp was notorious for its adult businesses and less-than-par reputation until the 1970s, when an effort to breathe a new type of life into the district began with rehabilitation and redevelopment efforts. In 1980, the Gaslamp Quarter landed a place on the National Register of Historic Places, and the city has attempted to preserve its historic significance ever since. While Victorian buildings are not hard to find on the East Coast, the West Coast has few; the Gaslamp is home to the largest number of these west of the Mississippi River.

The Gaslamp Quarter has since turned into a favored destination not only for San Diegans but the rest of the country. The food choices are as diverse as the people who visit and so are the drinks. It’s a popular choice for nightlife; walking down the sidewalks on the weekend, it’s almost as if there’s a boozy — yet still bright — atmosphere in the air. If you’re not hungry, shopping options range from high fashion to popular chain stores to shops with little oddities. The Gaslamp also has a booming arts scene, with plenty of galleries, museums and shows to satiate any art lover. Live music floods the streets and adds the perfect last touch to this diverse and colorful scene. There’s something for everyone in the Gaslamp, and it’s an important part of San Diego history that seems to transcend time.

Dissected by the CA-15 and El Cajon Boulevard, City Heights is often cast aside as a juxtaposing urban byproduct of either overly gentrified apartment complexes or local disinvestment. But this perpetuated facade of what is, in actuality, a beautiful community of strategic, tactical urbanism and intersecting culture, keeps City Heights at a low. Historically, 92105 might not be the most sought-after zip code in San Diego, but since the City Heights Urban Village Project was headed by architect Jack McGrory, community involvement and appropriate developments have helped this gem of a neighborhood shine a bit brighter.

A gateway to the global, there is much to appreciate in City Heights. As one of San Diego’s — if not California’s — biggest refugee and immigrant communities, City Heights is a hub of culture and innovation, a reflection of what the city with open arms should embody. This community doesn’t abide by a “come-and-go” philosophy, but rather invites visitors to stay, all the while attempting to challenge norms and prioritize people on the most individual and personal level. So the next time you’re crossing the 805, make sure to keep City Heights in heart and mind.

A Walk in the (North) Park// written by: Jocelyn Yang, Lifestyle Staff Writer

If you’ve heard of North Park through word-of-mouth, it might have been heralded as the epitome of an urban crawl or maybe written off as just another hipster’s oasis. However, North Park — whose nomenclature sounds akin to some lost older brother of a perversely comedic television series — has actually served as San Diego’s adult playground since the 1900s.

This buzzing hub sits just under Normal Heights and is anything but commonplace. Interestingly enough, North Park fits that exact geographic bill: slightly off-beat and embracing all things extraordinary. A walk around these pedestrian-friendly streets will grant you a mix of some history and some modernity.

Visit consignment stores like Thrift Trader, the Costco of quirky vintage treasures. Heed the post by the cash register which notes that they unfortunately do not accept blood oaths, firstborns, farm animals nor arranged marriages as forms of payments. Or visit Auntie Helen’s, which is chock full of the types of clothes you would expect. But if you don’t like digging around in your distant relative’s crazy and colorful closet, then you can go to Frock You Vintage Clothing shopping, which offers Huge Frocking Sales on garments from every decade, starting from the 1930s to whenever people stopped wearing frocks or making frocks altogether. Or check into another cheeky dress store, like The Girl Can’t Help It!, which unapologetically flaunts loud fashion pieces that promise a fun time.

This community prides itself on its intertwining arts — not only in its sights, but also in its sounds. North Park’s shining jewel, The Observatory, has hosted a plethora of artists, and its glistening marquee has boasted a spectrum of genres. The evidently all-encompassing music roster for upcoming future performers includes: Erykah Badu, Cold War Kids, Vince Staples, The Shins, TCHAMI and even the beloved viral duo William Singe with Alex Aiono.

But before you stumble into the velvet halls of this classic concert venue, grab a bite at any one of the hundreds of various kitchens. With the modern implementation of Yelp, visitors can find reviews that attest to North Park’s quality eats. Here are some classic grubs, as testified by thousands of fellow foodies:

The community in North Park has been welcoming and appreciative of the multifaceted culture that has developed in the heart of the city over the past hundred years, and we’re sure you will be too.