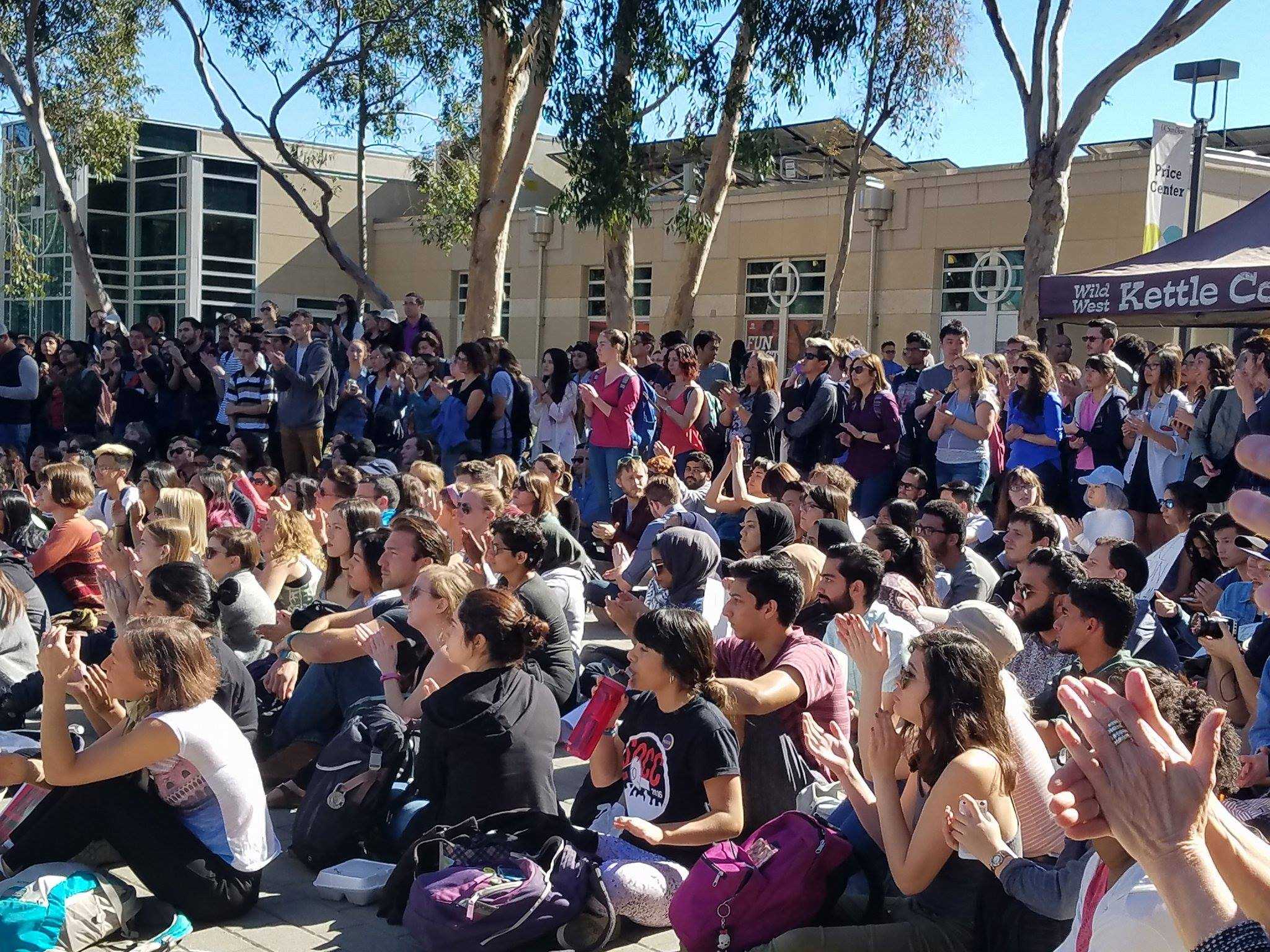 Hundreds of students and faculty members gathered at the Silent Tree in front of Geisel Library this afternoon to protest President Trump’s executive order that prevents travel and immigration from seven majority-Muslim countries located in the Middle East and Northern Africa. After about an hour, students and faculty gave speeches before marching to Galbraith Hall in Revelle College.

Protesters stood and sat in front of the entrance to Geisel Library, holding signs that read, “I stand 4 equality” and “such a nasty ban.” They also shouted chants, such as, “No hate, no fear, refugees are welcome here” and “no bans, no walls.”

Known as the “Muslim Ban,” the executive order prevents citizens from Iraq, Syria, Iran, Libya, Somalia, Sudan and Yemen from entering the United States for at least 90 days. The Muslim Ban additionally halts refugee admissions for the next four months in order to allow for application reviews, which will prioritize Christian refugees over Muslims, and blocks the entry of Syrian refugees altogether.

One of the protest leaders, Muir College senior Hamoun Dowlatshah, explained to the UCSD Guardian that he organized the protest to allow students and faculty to express their vexation and and to begin the process of fighting back against President Trump’s actions.

“We wanted to show our frustration,” Dowlatshah said. “We wanted to ask people to pay attention to issues that are going on around them even though it’s not directly affecting them today. This is the first week of Trump’s presidency, and there is already a lot of issues that are going on. He has made so many crazy executive orders that are coming from so many places that we don’t know which ones to attack. It is important that we care about our issues — we go out for our march and we go out for other people’s marches.”

Clarice Soban, a Sixth College junior who attended the protest, stated that the country needs to act upon the beliefs on which it was founded.

“I think, fundamentally, we like to think that we’re going to be the people who will help when we look back at history, and we say that we would be there for civil rights,” Sobon told the Guardian. “My thing is that, if we as a nation think we stand for something, we have to put our actions where are words are. I think that, as a nation, we’re fundamentally built on this idea of loving each other and being a place of welcome, and if we draw the line with any group, then [the foundation] of our nation just falls apart.”

Thurgood Marshall College senior Daisy, who declined to use her last name, mentioned that the she associates the protest with speaking out against her family’s immigration worries.

“I’m here because my mom is undocumented, and plenty of my family is,” Daisy said. “[Trump’s presidency] has become a very real fear, and I guess we’ve been in denial up until the inauguration, and now it’s very real. I feel the best thing is take direct action in any way we possibly can.”

For UC San Diego students who are studying here on student visas from the seven countries listed in the executive order, the Muslim Ban affects them directly.

Iranian electrical engineering Ph.D. candidate Shiva, who preferred to only use her first name, told the Guardian how the Muslim Ban may prevent her mother and father from attending her graduation. She has not seen either of them in three and five years, respectively, because of the nature of her single-entry visa.

“I finally managed to get my parents an appointment [at a U.S. embassy] for their visas to come for my graduation this year, and I just got an email [on Saturday] that the appointment was cancelled,” Shiva said. “Even further, beyond the 90-day period this ban is holding, all the other appointments from Iran are cancelled. It’s not just a temporary ban — it’s an unknown situation.”

Shiva explained that she has already accepted a job offer from Google, which may now be compromised by the Muslim Ban, and gave a speech to that effect at the start of the protest.

“The statement is so vague, and more and more is coming,” she added. “I’m not sure I can change my status even though I signed a job offer from student visa to work visa. Your whole future, everything you’ve planned for since you were in middle school, is suspended.”

Ali Sarebanha, a structural engineering PhD candidate attending UCSD on a single-entry visa from Iran, stated that although protecting the U.S. is important, the Muslim Ban is discriminatory.

“Discriminating against people from a specific country because they are Muslim-majority is not the United States we thought it was going to be,” Sarebanha told the Guardian. “They should be making sure people are OK when they’re coming, that they’re good people, but that’s not the reason to erratically change some policy and then stop everything without thinking about the consequences and how it’s going to impact peoples’ lives.”

Today’s demonstration follows a petition signed by more than 7,000 academics and researchers from across the country in response to the ban, stating that the executive order discriminates against people on the grounds of Muslim-majority national origion, harms the state of American higher education and posits “undue burden on members of our community.”

At the time of this publication, nearly 500 of the petition’s signatures are from faculty representing the University of California, and more than 40 are from UCSD.

Other protests have taken place across the country, particularly in airports, since the executive order was first signed.