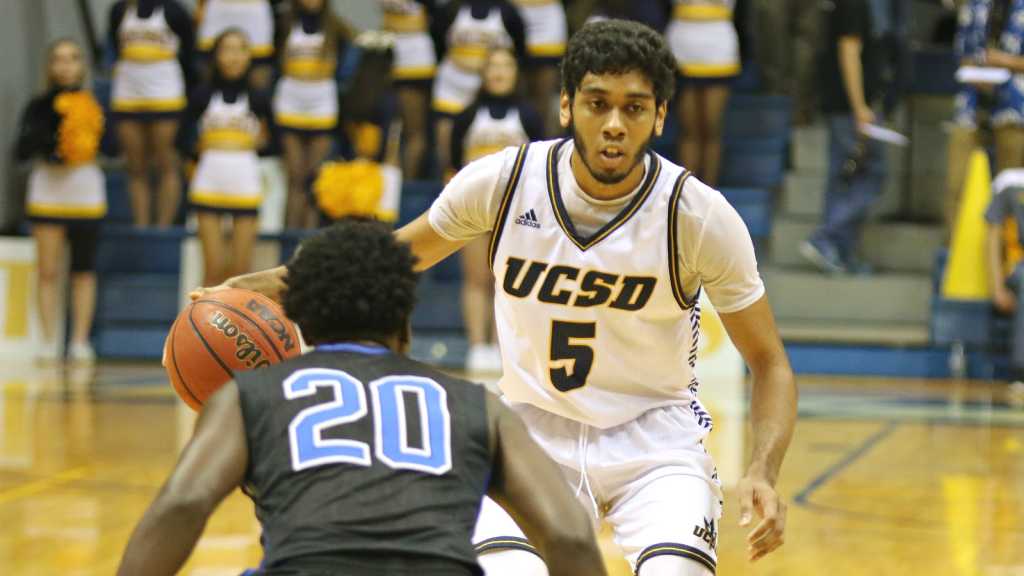 Despite going undefeated in conference play for about half of the season, the UC San Diego men’s basketball team have hit a wall in its last two games. On Thursday night, the Tritons took their second consecutive loss at the hands of Cal State San Marcos, 67–72.  Their second loss in as many games brings their overall record to 14–4, meanwhile holding a 9–2 conference record. The Tritons now stand tied for first place with Chico State University (9–2) in the California Collegiate Athletic Association standings.

UCSD got off to a terrific start, taking a 20–9 lead almost midway through the first half and looking as if the team was on its way to a comfortable win. But basketball is a game of runs and San Marcos took advantage of the Tritons’ lackadaisical defense to turn the game around, going on a 19–6 run to take a 28–26 lead with a few minutes remaining in the half.

Even though they did not execute as well as they would have wanted, the Tritons still had a chance at redeeming themselves in the second half and almost did. After San Marcos increased its lead to 10 early in the half, UCSD was able to climb back into the game and trailing only by a mere point, 52–51. Freshman forward Scott Everman did his best to help the Tritons to a win with a career-high 16 points (6–11). However, at the end, the team fell just short after the Cougars increased their lead back to eight with a few seconds of play remaining.

UCSD finished its up and down shooting night at 45 percent (27–60) which is not particularly bad, however 16 turnovers simply is way too many. The Tritons cannot afford to be careless with the ball as they come near the last part of the season.

Another telling part of the game was the amount of free throws San Marcos took compared to UCSD’s. The Cougars shot 32 free throws, making 27 while the Tritons only took eight trips to the line and made four.

UCSD will need to show resiliency in its next couple of games as the team heads back on the road for two important matchups. The first of those coming up against Stanislaus State University on Friday, Jan. 27, which will be vital in order to instill the confidence back into the group, especially given that on Saturday, Jan. 28, a crucial trip to Chico State will take place. The Tritons need all the momentum going into the Chico State matchup because they cannot afford to be moving down the standings as the season winds down. It will be interesting to see how the group responds to the adversity which has not exactly existed during the season, at least in conference play. Both matchups will tip-off at 7:30 p.m.