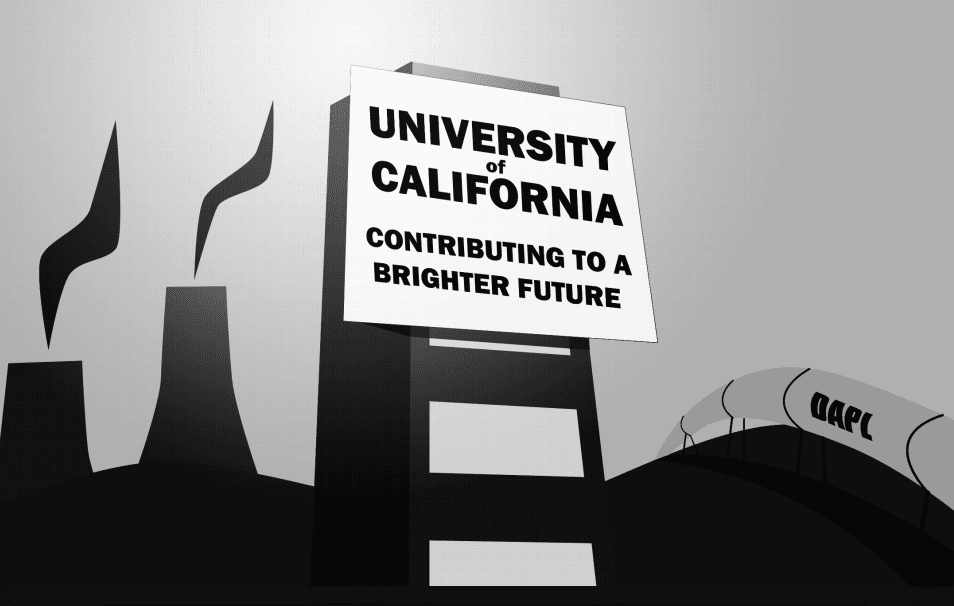 As a university system struggling to fund itself, the University of California needs to have a strong investment portfolio as a source of income. This practice isn’t inherently unethical, even if it is done by a public institution. It only becomes a conflict of interest when the university invests in corporations that contradict the core values that it stands for. An analysis of the UC General Endowment Pool reveals that such is the case for the University of California. The same university system that produces a wealth of research on climate change and preaches diversity has major ties to corporations which counteract environmental sustainability and endanger minority groups.

An area of environmental concern with the UC system’s endowment is the multitude of investments in fossil fuel companies. Our state has made it a goal to limit carbon emissions and build a future on sustainable energy, and such investments are a slap in the face to those who have labored for years to make this a reality. By financially supporting a number of publicly traded companies with high-ranking carbon reserves, our university’s endowment prioritizes the short-term benefits of fossil fuel investments over the mission-aligned pursuit of clean-energy alternatives. Without a doubt, this switch which will become necessary in the decades to come.

Investing in Regency Energy, now owned by Energy Transfer Partners, is another heinous choice for the University’s money: it runs contrary to the programs proposed by the UC to honor the Native American community, which includes UC students. This is because another subsidiary of Energy Transfer Partners is currently building the Dakota Access Pipeline. Though proponents of this project are eager to advertise the jobs it creates, the moral costs of the project far outweigh the benefits. In addition to perpetuating our dependence on fossil fuels and risking the contamination of a tribe’s water supply, the construction of the DAPL through the Sioux Tribal Reservation has stripped Native Americans of their land and violated a historic treaty guaranteeing the Sioux tribe ownership of the land at Standing Rock Reservation. By keeping $900,000 invested in Regency Energy Partners, the University communicates that it does not genuinely stand in solidarity with the thousands of Native Americans whose wellbeing is put at risk by the DAPL. The move serves to undermines UC San Diego’s own support of creating a Native American Council to shed light on Native American culture and the needs of the Native American community. It undermines the UC system’s cross-campus programs dedicated to the study of Native American culture and history. Simply put, the investment undermines the UC itself, as a research university system, by fighting against Native American tribes and land.

These financial decisions by UC Regents are not just about money. History has shown that the UC’s investments alone do have a lasting impact on the livelihood of certain companies, and, in turn, social change. Perhaps the greatest example of this is the UC system’s part in the movement to end apartheid, one of the most prominent examples of divestment as a social movement in the past century. In 1985 the UC had more than 1.7 billion dollars invested in corporations that did business in South Africa, a whopping one-third of the entire investment portfolio. Students and faculty had been calling for the UC system to take a stance against apartheid since 1977, but the UC Board of Regents was hesitant to heed their demands. Meanwhile, Michigan State University, Columbia University and Stanford University, among others, pulled their investments from South Africa. Finally, following massive protests in 1986 — including the UC-wide “Divestment Day” — UC Regents agreed to a full divestment from corporations that did business in South Africa by 1990. As it turned out, they were on the right side of history: by 1994 South Africa removed all laws enforcing apartheid and elected Nelson Mandela president. The action of the UC Regents to stop financially supporting apartheid shows that private divestment can make a huge difference in the outcome of history, a message as true today as it was thirty years ago.

The clamor for divestment is as alive today as it was then; though, as always, UC Regents drags its feet toward taking a stance on the issues. The greatest success in recent years was the divestment of $30 million from corporations that operate private prisons, a necessary statement in favor of dismantling the U.S. prison-industrial complex which has been growing consistently over the past four decades and holds 25 percent of the world’s prisoners, while the U.S. only encompasses 5 percent of the world’s population. The UC Regents made the decision largely because Black Student Unions on all nine campuses made resolutions condemning the investments, which goes to show that students can and do have an impact on Regents when they speak up.

The fight to make the UC system’s investment portfolio morally justifiable — and aligned with the University’s values — is one that will see no single victory but progress over time instead, so long as students and faculty put pressure on the people investing the University’s money in questionable locations. This year, students and faculty have made strides in doing so: More than 670 members of UC faculty released a letter calling on the UC system to divest from fossil fuels, halting new investments immediately and getting rid of existing investments within five years. A divestment resolution was also passed by UC San Diego’s Academic Senate at the 2016–17 Senate Elections this past April.

With such widespread support from the people who make up the university, it is imperative that UC Regents acknowledge criticism when it is valid, and put their money where their mouth is. The bottom line is simple: UC funds must be invested in the futures of our students, our faculty, our youth and our planet, not in corporations that act against our interests, our ethics and our values.

One thought on “To Communicate Consistent Message of Purpose, UC Investment Strategy Must Prioritize Ethics”