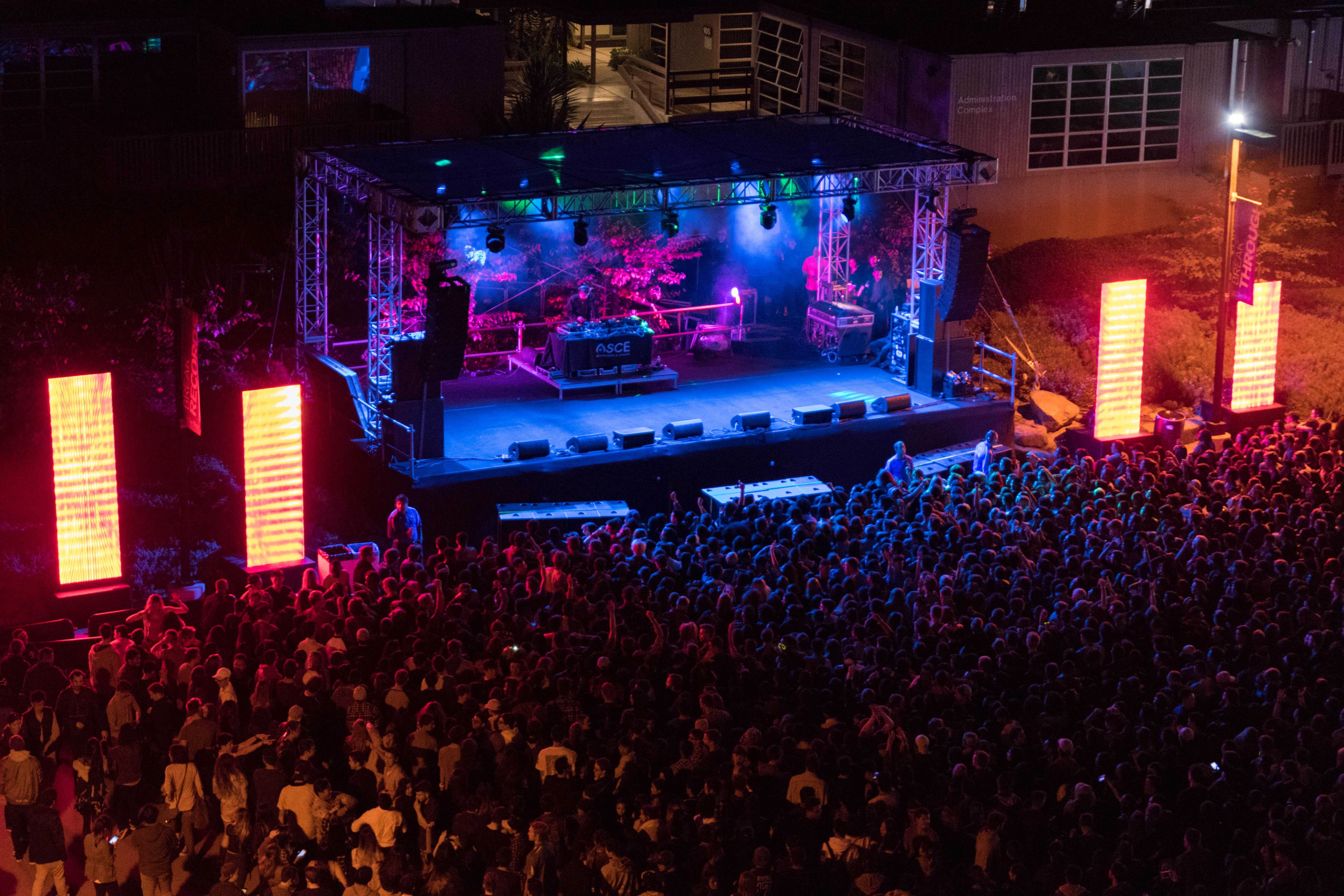 UCSD’s sixth annual Hullabaloo took place on Friday, Nov. 18 in Matthews Quad and Town Square as part of the celebration for Founders Day. The event was first organized in 2011 by Associated Students Concerts and Events to add a student component to Founders Day.

After the Founders Day celebration from noon to 2 p.m. on Friday, Hullabaloo transformed “the center of campus into an explosion of lights, colors and music” when it opened its doors at 8 p.m. This year’s festival had music, amusement rides and food provided by HDH, Taco Villa, Goody’s and Yogurt World.

For the concert part of the event, ASCE assembled a lineup of headliner Isaiah Rashad, flanked by Andrew Luce and Tennyson, who all performed on a stage set up in Town Center.

Tennyson opened, followed by Luce and Rashad, whose performance included “Free Lunch” and “What’s Wrong” from his latest album “The Sun’s Tirade,” and “Heavenly Father” from his debut album “Cilvia Demo.”

Marshall College sophomore Amber Fossier told the UCSD Guardian that while she had never listened to any of the artists’ music before, she liked Luce’s act.

“I didn’t know any of the artists prior to attending Hullabaloo, but I enjoyed Andrew Luce’s set,” Fossier said.

“For me, I felt like this year was much more exciting, and that people were more energetic for Isaiah Rashad. I was surprised to see that the majority of people around me were completely into Rashad’s music. I didn’t initially think Rashad would’ve been a good pick for UCSD, but I was so happy to see everyone around me have a good time.”

Warren senior Nicole Farrales noted that she preferred the 2016 lineup to last year’s.

“I did go to last year’s, and I thought this year’s was better because of the headliner Isaiah Rashad,” Farrales told the Guardian. “My favorite performance was Isaiah Rashad’s entire set because his sound is easy to vibe to, and the crowd was all really into it.”

Farrales, who also worked for One Stop and is familiar with members of Associated Students, added that she felt ASCE did well with keeping the student body in mind when finding performers.

“I do really feel that the artists were chosen for the UCSD population, because ASCE is very diligent with surveying students and requesting feedback and opinions on potential performers [and] events,” Farrales stated. “ASCE is a group of extremely dedicated people who always prioritize the interests of their fellow students, and they deserve much more credit than they get.”

The event offered a variety of ride choices to all attendees, including the Zipper, the Round Up and the Hurricane all set up across Matthews Quad.

Fossier explained that there was one line for all three rides, causing long wait times.

“I was really excited to go on the rides, but the line was very long, and I didn’t feel like it was worth it because I heard that the wait was about an hour to an hour and a half,” Fossier said. “Apparently [in] the years before the lines for the rides were individual and not just one large line that feeds into the different rides, so I feel like the old system was better.”

Given that the food provided was not unique to the event, Fossier opted out of buying anything from the vendors as well.

“I didn’t have any of the food and didn’t go on the rides mainly because the food was just the food trucks that are on campus normally, and I didn’t feel like that was special or anything,” Fossier stated.

Hullabaloo went late into the night, with Rashad taking the stage around 11 p.m. and the rides closing at 11:45 p.m.