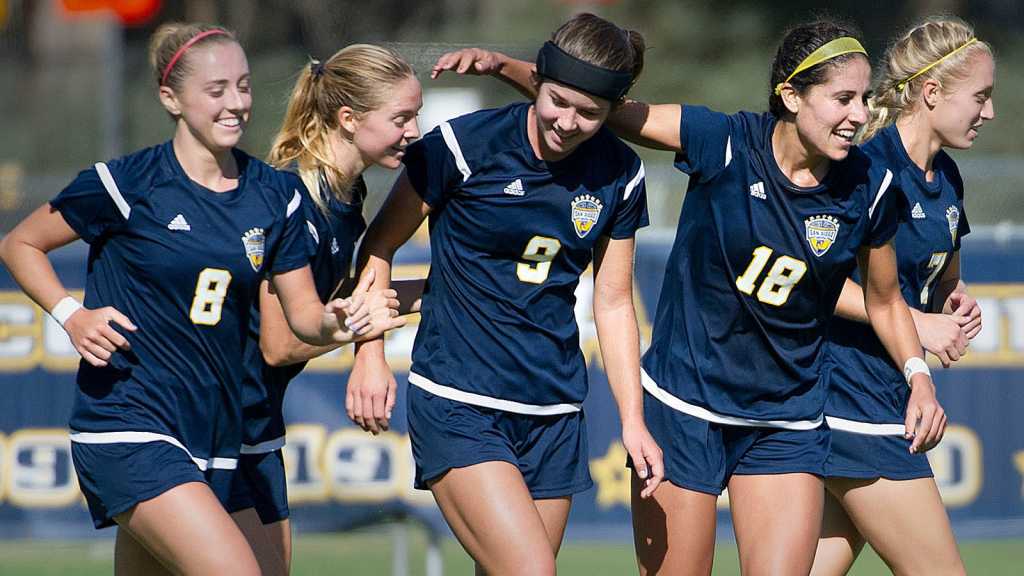 On Friday night, in a rematch of last year’s California Collegiate Athletic Association conference title game, the No. 9 UCSD women’s soccer team celebrated a 3–0 road victory over Cal State Stanislaus. The tenth consecutive victory for the Tritons means they sit atop the CCAA standings thanks to their perfect 9–0 conference record (13–2 overall).

The Tritons got off to a terrific start with the help of sophomore forward Mary Reilly as she wonderfully controlled a cross from junior midfielder Jordyn McNutt and had the composure in front of the goal to slot the ball low and hard into the corner of the goal. Reilly’s seventh goal of the season came only with 2:54 gone in the first half to give the Tritons a 1–0 lead. The rapid start gave UCSD early control of the match, which it dominated with an 8–4 shot advantage at the end of the first half. A 1–0 lead was not exactly indicative of the play, as UCSD was unlucky not to bag another one or two, but the goalposts denied the team twice.

Within the first minutes of the second, Reilly found the back of the net to earn her second brace of the season, bringing her season total to eight. This time around, junior midfielder Elisa Martinez registered the assist as she cleverly read the opponent, intercepted the ball and played the ball forward to Reilly, who made no mistake about it and got it past the opposing goalkeeper.

Redshirt senior goalkeeper Itzel Gonzalez did not have much to deal with on the night as she was called upon a mere one time in order to keep her CCAA-leading 11th clean sheet.

Junior forward Katie O’Laughlin delivered the third and final goal as she took the ball off a defender and calmly struck the ball into the bottom right corner. With her 13th goal of season, O’Laughlin extended her goal streak to four consecutive games.

Reilly and O’Laughlin will look to keep the goals coming on Sunday versus Cal State East Bay, in the hopes of keeping UCSD’s unbeaten streak alive. A victory against East Bay guarantees the Tritons a first-round bye in the CCAA Tournament.