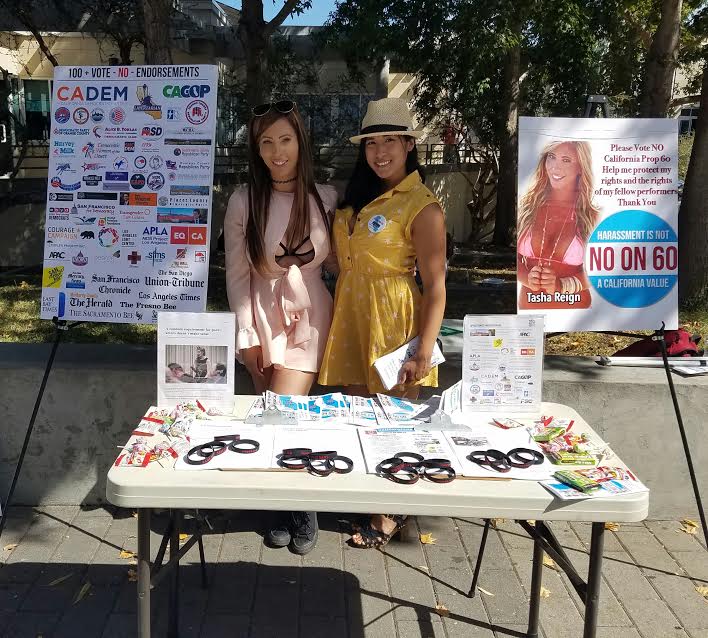 Several adult film performers, including Tasha Reign, visited campus on Monday afternoon to hand out pamphlets and advocate against Proposition 60 to students, staff and faculty. Prop 60, which will appear on the ballot this November, seeks to require the use of condoms and other protective barriers in pornographic films.

The official, shorter summary of the initiative states that the proposition requires adult film actors to use condoms while filming sexual intercourse; producers to pay for performers’ vaccinations, tests, and medical examinations; and producers to post the condom requirement at filming locations. Additionally, the expected fiscal impact is an annual loss of several million dollars in state and local tax revenues and increased state spending of over $1 million on regulation.

Mia Li, adult film performer and YouTuber, explained to the UCSD Guardian that she is against Proposition 60 because the enforcement of the measure could expose her and other performers to lawsuits, even if there is no evidence the law was violated.

“Any California resident, performer or body of the state can enforce this proposition, and that enforcement is a form of lawsuit against performers […] so people can actually make money off of suing performers,” Li said. “[…] it can be a frame of just people kissing, where the genital penetration is not seen, and that is grounds for a lawsuit, when they could actually be using the barrier protection.”

However, the Yes on Prop 60 campaign, lead by President of the AIDS Health Foundation Michael Weinstein, states that the initiative specifically prevents adult film performers from being sued in subsection five of section four, which reads “liability under this Act shall not apply to adult film performers, bona-fide employees, individuals providing independent contracting services or production volunteers of an adult film producer who are acting within the scope of the general services being provided and in accordance with the instruction of the adult film producer…” Supporters of Prop 60 additionally state that the initiative will be beneficial to adult film performers because it will prevent them from acquiring diseases while on the job and protect their health.

Hernando Chaves, a professor and therapist who accompanied the actresses, clarified that because many performers are also producers, they can still be sued as producers.

“Many performers do content trade with other performers, create content for their websites for sale, utilize cam shows and charge viewers, make income from affiliate programs and a host of other ways they have a financial stake and engage in production/producer roles,” Chaves told the Guardian. “Most performers produce content, hence are producers for themselves. Unfortunately, the language in the proposition assumes there is a clear separation between producer and performer, when in fact, they overlap for the overwhelming number of performers.”

Li also noted that the use of condoms is not an issue in the pornographic film industry to begin with, as the industry is largely self-regulating and has been collaborating with the California Division of Occupational Safety and Health.

“We have protocols, testing and the option to be autonomous over our sexual health; we are not anti-condom at all,” Li stated. “We are pro-option, which this proposition will take away because we are the people who have the most intimate knowledge about how our bodies work, what is good for us and what is safe for us. We are currently working with Cal/OSHA to have our regulations that we have created ourselves beyond paper, and this completely overrides the work that we’ve been doing.”

According to Li, she and other adult film performers have traveled to several other universities to speak with students because they believe the students will be more receptive to listening to their information.

“We think that this generation is more open-minded, sex-positive and willing to hear because we know that there is so much stigma attached to the industry and sex work and adult film, and I think this generation that is here in a place of learning is more willing to educate themselves and also hear the voices of the people in the industry,” Li said.