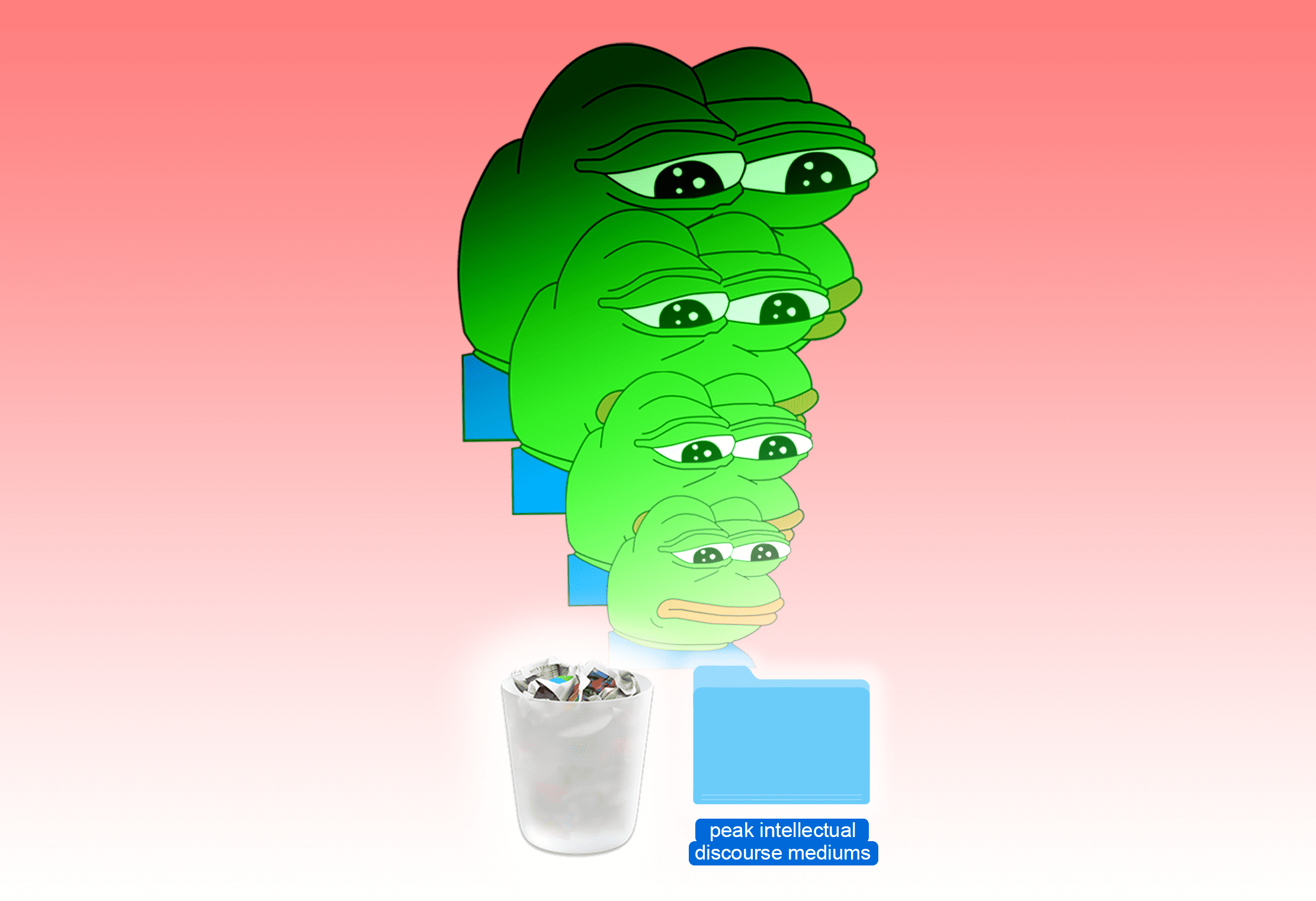 Memes originally meant units of culture that spread between people, mind-to-mind through behavior and language. At their core, internet memes still fit this definition. For better or worse, they do affect people’s behaviors and opinions offline.

Memes forge subcultures around in-jokes and shared vocabulary, leading certain phrases, slang, and idiosyncrasies to infiltrate our in-person speech, even revealing, for example, whether we spend more time on Tumblr or Reddit. Cybercultures, in turn, can often cohere into real-world communities through their shared languages.

The Black Lives Matter movement originally rose out of a hashtag and coalesced around memes on Twitter designed to highlight black Americans’ experiences. On the other hand, sites like 4chan have hosted a resurgence of young conservatives, the alt-right, whose use of the once-innocent meme Pepe the Frog for white supremacy has led to it recently being declared a hate symbol by the Anti-Defamation League. Less politically, even the death of the gorilla Harambe in May, which would certainly have faded into obscurity by now if not for memes, has stayed bizarrely relevant to the extent that a candlelight vigil is planned for later this month.

Memes engage people in topics by letting anyone enter the discourse and turn it into a massively social activity. Misinformation may arise from this radical accessibility, but savvy internet-users develop a sense of healthy skepticism using fact-checking sites like Snopes.com. The use of memes to give facts appealed to third party candidates this year, who cannot always afford effective space on TV and instead invested in this highly democratized form of media. Gary Johnson spent $30,000 on memes for his campaign, and Jill Stein endorsed her own “dank memes” on Twitter and Facebook. Since anyone can make memes in response, these efforts can backfire, but this reflects their democratic nature and reveals how the means of producing memes invariably remain with the masses.

Despite Popularity, Memes Will Never Have Significant Impact on Society

Memes are clever: they stand out among the overload of information on Facebook and, as such, get people to pay attention to something they might’ve never thought to look up. And that’s exactly it. Some people will likely go out of their way to inform themselves on a particular topic while others might just stick around for the laughs. While memes may spread awareness, there is a danger that the discourse surrounding these issues remains superficial, since it is both tempting and easy to limit your political participation to a quick like or share.

Creating a meme and sharing it doesn’t actualize change unless the individuals participate in politics outside of social media. In order for memes to be effective, it is necessary that the individuals sharing them understand what is being commented upon in the first place. Every meme, regardless of how relevant it is, refers to something that is buzzing within popular culture.

According to the Pew Research Center, approximately 27 percent of American households do not have access to a computer with the internet access. That’s a lot of people, considering that in 2008 only 62.5 percent of eligible voters voted in the presidential election and, with 57.5 percent, even fewer participated in 2012. The luxury of Internet access and of being educated enough demonstrates that the power of memes is limited. Memes reach only those who are likely to be familiar with the issues at hand, and continue a conversation within these networks rather than fomenting actual change. As such, facilitating the spread of memes and participating in politics exclusively online are both inadequate methods of raising awareness, since being conscious of the underlying nuances of a meme is necessary to being influenced by it. Those of us who do have access to the Internet have a responsibility to share and continue discourse about the values and issues we care about offline and in person, in whatever ways we can.

That memes have become inescapable is a modern fact. Politicians know this to be a blessing and a curse: while binders-full-of-women memes were launched against Romney by users as early as during the 2012 presidential debate, Trump has embraced Pepe as his own — and consequently contributed to its classification as antisemitic.

But it’s not politicians who are profiting the most from engaging users with memes. As explored in a lengthy New York Times feature, there is a segment of Facebook pages — including Occupy Democrats and US Uncut, among many others — that appear to be political news sources but redirect to ad-strewn websites, existing purely for the sake of raking in revenue for the page-owners. The audience for these sites is people who are looking to engage in political discourse on Facebook, and as evidenced by the often-misinformed content, for whom accuracy is not a priority. Adam Nicoloff, who runs one of these Facebook pages, describes making over $20,000 in a good month.

It is clear that memes have transcended niche Internet social usage: they have a firm place in political discourse and in business. They have the potential to carry social capital and — if even in a small role — our elections. As reported by Brown Political Review, this is the campaign season wherein voters aged 18 to 29 have turned out to vote at rates rivaling baby boomers. Maybe they’re wearing their #ZodiacTed shirts, as 40 percent of Floridian respondents in a Public Policy Polling survey reported being either confident or unsure that Ted Cruz is the Zodiac Killer.

But the role of memes in our business, our social media and our politics is something that everyone should consider. Internet users should be aware of their commercialization, and — if they find that their meme-ing is funding someone’s dubious business — question whether or not they want to play the role of contributor.