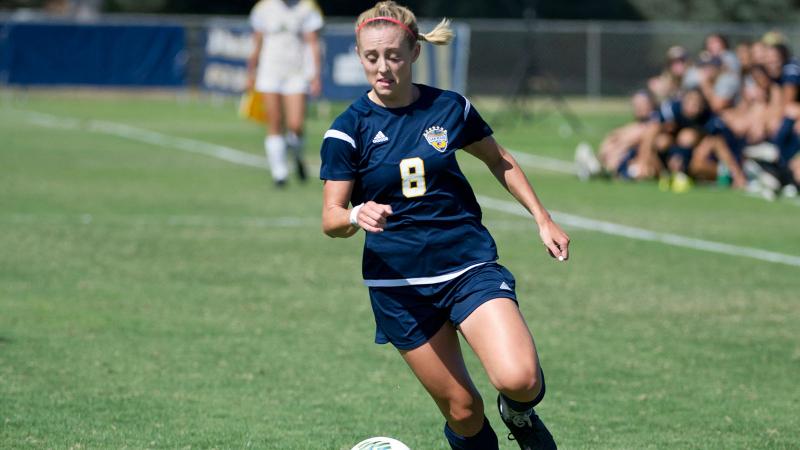 After only allowing one goal in their past four games, the No. 8-ranked UCSD women’s soccer team traveled to San Francisco to compete in its fifth California Collegiate Athletic Association game. The Tritons upheld their undefeated CCAA record by defeating San Francisco State 2–0 to boast a 5–0 record in league and 9–2 overall. The recent win was also their third shutout win in a row.

UCSD jumped to a head start by scoring the first goal in the eighth minute of regulation. After SFSU goalkeeper Christina Holguin rushed out and misplayed a bouncing ball, sophomore forward Mary Reilly was able to come up and score an empty-net goal.

Reilly again came up big for the Tritons in the 70th minute of play after sophomore winger Summer Bales delivered a cross from the far left. Reilly, with one touch, guided the ball to the opposite post and made it a 2–0 lead.

The two goals were Reilly’s second multi-goal match of her career. They were also her fifth and sixth goals on the season, placing her second for the most goals on the team tied with senior midfielder Kiera Bocchino.

The Tritons in total put up 24 shots with eight on target, keeping Holguin quite busy throughout the 90 minutes of play. Though UCSD got the win, head coach Brian McManus recognized areas for improvement.

“In the first half, we were not very good, but we got the goal,” commented McManus. “It seemed like we created a lot of shots, but not a lot of clear shots. I thought some of the bench players came on and helped us in the second half.”

This was apparent as sixteen of UCSD’s total shots came in the second half. Senior goalkeeper Itzel Gonzalez remained perfect for the third straight game following Friday, though it was not without the help of the three starting defenders, senior Meghan Berry, junior Makenzie Brito and junior Aimee Ellis. The Tritons’ solid defense only allowed eight total shots by the Gators with none being on target.

The Tritons traveled to Seaside on Sunday and defeated Cal State Monterey Bay 4–0 to gain sole possession of first place in the CCAA. On Friday, they come home to play Cal State Los Angeles at 4:30 p.m.